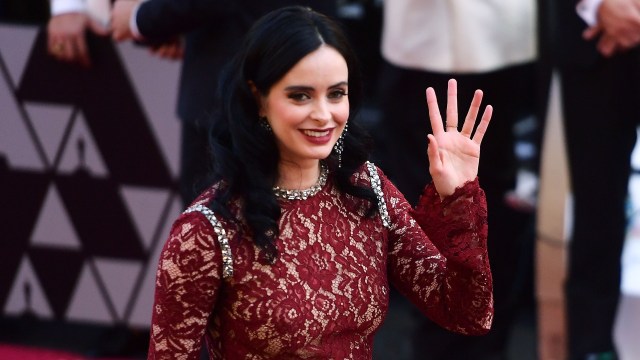 The Jessica Jones star never shies away from a killer outfit. Krysten Ritter ditched the leather jacket and blue jean ensemble to give us Wicked Witch of the West vibes with her latest Instagram post.

A woman of few words, Ritter captioned a recent upload with “Oh, hi.” Her Instagram post contained two images of herself posing in a black two-piece ensemble with thigh-high platforms boots and green faux fur to complete the Wicked-esque look. Ritter’s jet-black hair cascades neatly over her shoulders as she gives the camera a dead-eyed stare. Just like her Marvel character, she loves black, and she means business.

Ever since wrapping on Jessica Jones in 2019, Ritter has kept herself booked and busy with plenty of side projects. While pressing pause on her portrayal of Hell’s Kitchen’s super-powered heroine, Ritter reprised her role as Jane Margolis in the Breaking Bad spin-off film El Camino — which released months after giving birth to her first child. Last year, Ritter landed her most recent feature-film role in David Yarovesky’s Nightbooks as the devious witch Natacha.

In the near-distant future, Ritter is set to appear as Sherry Cleckler in the upcoming crime-drama miniseries Love and Death from Lesli Linka Glatter, which is scheduled to premiere on HBO Max sometime in 2022. Hopefully, her frequent gym trips are foreshadowing a potential return to the MCU for Ritter’s hard-bitten alcoholic. Even if it doesn’t, we’d all better pray that she isn’t unnecessarily recast — as seems to be the norm for Marvel movies these days. Like the travesty of Tom Cruise supposedly replacing Robert Downey Jr. as Iron Man, if they recast Ritter as Jessica Jones, we riot.