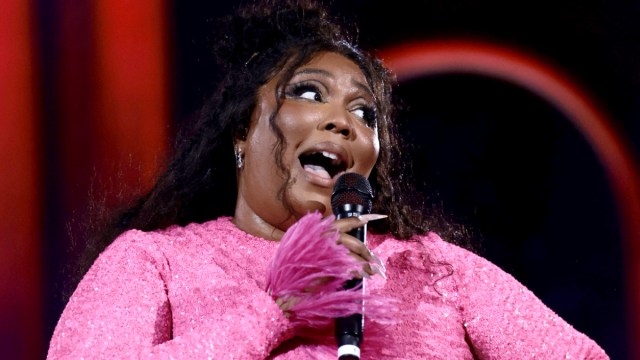 Kathy Hilton went and stepped right in it during an appearance on Watch What Happens Live on Wednesday night by not being able to identify our queen and goddess Lizzo and, in doing so, committed a racial and fatphobic microaggression. And it appears as though the “About Damn Time” singer may have subtly clapped back.

It all started when Hilton evidently did not know who Melissa Etheridge was in the episode of The Real Housewives of Beverly Hills that aired earlier that evening, which in turn led host Andy Cohen to play a little game of “Will Kathy Know Them?” with the socialite. To Hilton’s credit, she also guessed wrong with Ryan Reynolds and Justin Timberlake,but really, really whiffed on it when Cohen flashed Lizzo’s image up on the screen.

“I feel like I do,” Hilton said, after mulling it over, then guessing “Precious?” in what seemed like a reference to the 2009 film starring plus-sized actress Gabourey Sidibe.

Her extremely wrong answer resulted in Cohen and Hilton’s co-star Crystal Kung Minkoff, who was also a guest, to double-over laughing. Meanwhile, Mathis Family Matters star Greg Mathis Jr. and his partner Elliott Cooper, who were tending bar behind the trio, had a decidedly different reaction to the faux pas.

“She is precious, though. Lizzo is precious,” Minkoff attempted, while Hilton tried to do some speedy damage control. “That’s what I call her!” the 63-year-old countered. “Her nickname is Precious, to me.”

It didn’t take long before the discourse made its way to Twitter, where many, including YouTube star Kalen Allen, pointed out exactly why it’s problematic to so casually confuse Lizzo with a fictional character.

“That Kathy Hilton clip is messed up, and y’all know it is,” Allen wrote. “Lizzo minds her own business ,but all people do is make her a joke ,and this time, it wasn’t even intentional. This time she caught a stray ,and I wish someone would’ve stepped up and said something.”

In a follow-up tweet, Allen reminded people that when the Precious came out, many used the character’s name in a derogatory context to bully and fuel fatphobia.

Others had similar sentiments:

Though Lizzo has not directly commented on the incident, she did take to Twitter on Thursday to remind fans that she’s still living her best life. “Meanwhile…” she captioned a few photos of herself in swimwear from someplace tropical-looking, along with a sunglasses face emoji.

The best clapbacks leave them wondering, so either way, good on Lizzo. Meanwhile, for real.