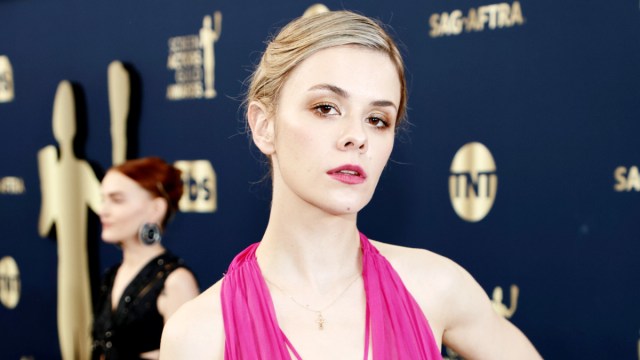 It’s been five years since allegations surfaced that comedian Louis C.K. had a long history of predatory behavior toward female colleagues, effectively making him persona non-grata in Hollywood. But instead of fading quietly into the background or starting down a path to redemption, C.K. chose an interesting flex by continuing to perform comedy that was in stark contrast to the material that he had built his once-successful career on.

The 55-year-old’s new material perplexingly delved into school shootings, ridiculing the teen survivors of the Parkland massacre. But while this only further drew ire from his detractors, C.K. quickly found a new audience among alt-right fans. So perhaps it shouldn’t be completely shocking that rumors are linking the comedian to 31-year-old Belarus-born Red Scare podcast host Dasha Nekrasova.

Nekrasova, who also starred as Comfrey the crisis PR rep on season 3 of Succession, also got herself into hot water last year by cozying up to Sandy Hook denier Alex Jones in an Instagram post, whom she subsequently praised as “an incredible entertainer” on her podcast. (It’s currently unclear whether Nekrasova will appear on the fourth season of the popular HBO series, which premieres next year.)

In either case, despite the age difference, it would seem as though the pair would be like two peas on a pod. Rumors that C.K. found his problematic queen went into overdrive when Twitter user @Jezebirb tweeted a screenshot of an Instagram story from the anonymous celebrity gossip Instagram account DeuxMoi on Sunday, which claimed that the two were recently spotted looking cozy together in Greenwich Village.

So far, there’s been no official confirmation from either party, but it didn’t take long for the gossip to go into overdrive, as Twitter reacted with a combination of horror and glee at the very thought of C.K. and Nekrasova together.

“Shaking my girlfriend awake like there’s a fire to tell her Dasha is dating Louis C.K.,” tweeted one user.

“The movie that Louis C.K. makes with Dasha as his muse is going to be so insanely bad and I can’t wait to see it,” wrote another user.

There were also no shortage of memes over the alleged pairing, which is both horrifying and makes perfect sense at the same time.

Many of the memes imagined what C.K. and Nekrasova actually look like together — from Penguin and Catwoman in Batman Returns and Wario and Waluigi to Chewbacca and Princess Diana and so on.

We sincerely wish this cursed union the best of luck.