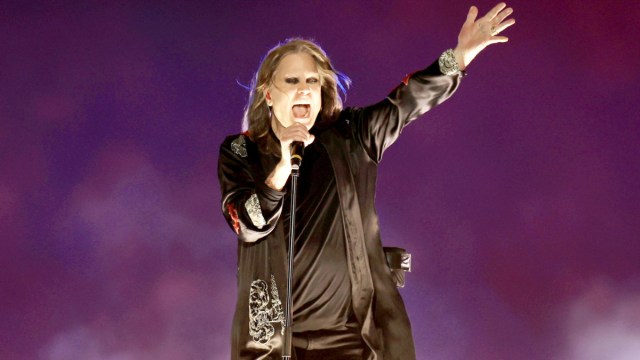 Ozzy Osbourne and his wife of four decades, Sharon Osbourne, are officially headed back to England after spending over two decades living in the United States.

In a wide-ranging interview with The Guardian published over the weekend — mostly focusing on the Osbourne’s health problems and burgeoning comeback — the couple revealed their plans to move back to the UK in February. Currently, their Los Angeles mansion (not the same one where their hit MTV reality series The Osbournes was previously filmed) is on the market for $18 million while contractors make necessary upgrades to their 120-year-old, 350-acre Buckinghamshire estate.

However, Sharon was quick to shoot down rumors that she and Ozzy are moving due to his health problems. (The 73-year-old was diagnosed with Parkinson’s disease in Feb. 2019, a month after he underwent surgery to fix his neck, which already had issues due to his 2003 quad-bike accident.)

“I knew people would think that. It’s not. It’s just time,” she told the publication. “America has changed so drastically. It isn’t the United States of America at all. Nothing’s united about it. It’s a very weird place to live right now.”

Ozzy, on the other hand, was slightly less diplomatic when explaining why he and his wife plan to leave America.

“The Ozzy version: ‘Everything’s f*cking ridiculous there. I’m fed up with people getting killed every day. God knows how many people have been shot in school shootings. And there was that mass shooting in Vegas at that concert… It’s f*cking crazy.’

‘And I don’t want to die in America. I don’t want to be buried in f*cking Forest Lawn,’ he says of the LA cemetery favored by expired celebrities. ‘I’m English. I want to be back. But saying that, if my wife said we’ve got to go and live in Timbuktu, I’ll go.’ Ozzy inhales deeply, gathers his vocal capabilities and concludes quietly. ‘But, no, it’s just time for me to come home.'”

“I don’t want to die in America” is a strong choice of words from a guy who once bit the head off a live bat online, which will arguably be one of his legacies someday after ostensibly not being killed by gun violence in the United States.

But when you’ve lost Ozzy … Well, let’s just say plenty of folks on Twitter had things to say about that.

“Congratulations, America. You’ve become too nasty and dangerous for the Prince of Darkness, deadpanned one user, as plenty of others likewise pointed out the irony.

Well, you know, even the Prince of Darkness has his limits, and apparently, those limits are children getting gunned down in cold blood over and over and over again, and yet our elected leaders somehow being powerless to stop it. The UK certainly ain’t perfect either, but when Ozzy freaking Osbourne thinks it looks like a sanctuary in comparison — you know you’ve got problems.