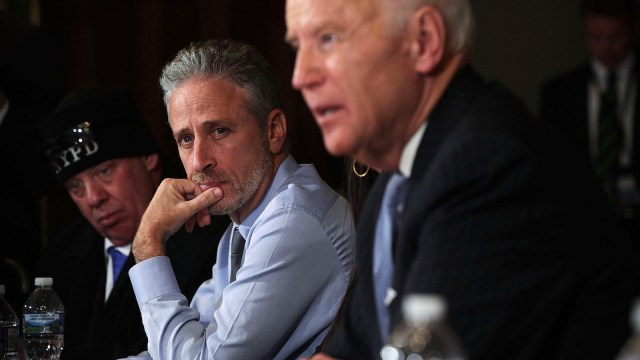 President Joe Biden gave former Daily Show host Jon Stewart some kudos for his help in the passing of a healthcare bill for veterans.

Stewart, who has passionately advocated for veterans over the years, was at the capital last month to help pass the PACT Act, a bill that expands medical benefits to veterans who were exposed to harmful chemicals from burn pits.

Republicans in the Senate blocked the bill citing costs. Stewart responded by saying the GOP senators “haven’t met a veteran they won’t screw over.” Biden signed the bill on Wednesday and publicly thanked Stewart.

“What you’ve done, Jon, matters, and you know it does, you should know,” Biden said, “we owe you big, man. We owe you big.” People in the room gave Stewart a standing ovation after Biden’s speech.

Before the bill was passed, Stewart took aim at the GOP lawmakers who voted against the bill.

“This is corruption at its finest. And sadly, these are the people that fought and defended their right to this fuckery,” Stewart said, according to Business Insider. Eventually, some GOP senators voted to pass the bill but 11 did not. Those include:

Biden also shared that he “wanted to come up and hang out on the Capitol steps” but that his security wouldn’t let him.

“The Secret Service said I’d be a pain in the neck and wouldn’t let me do it,” Biden said.

Stewart recently returned to television with the Apple TV Plus show The Problem with Jon Stewart last year. It’s his first time back hosting a show since The Daily Show went off the air in 2015.