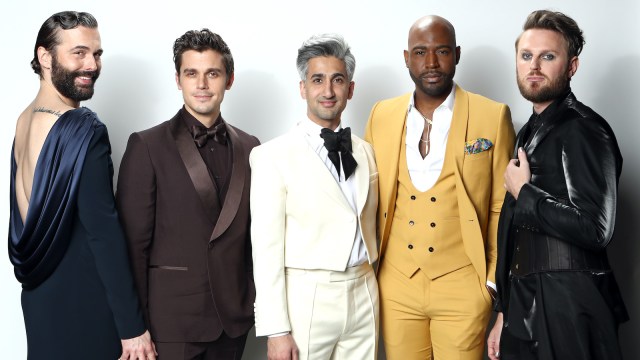 Lovers of all things Queer Eye were thrown a fast curveball when Antoni Porowski, one of five members on the hit Netflix show, revealed on social media that he and fellow co-star Jonathan Van Ness are finally, after all these years ⏤ you guessed it ⏤ together.

In his post on Instagram and Twitter, Porowski wrote, “Some personal news ❤️ after years of joking about it, we’re finally together. Here’s to giving things a shot 🙂 More tomorrow.”

Van Ness, who identifies as non-binary and goes by the pronouns he/they/she, posted a similar photo on their social media, writing, “And to think it all started as a joke. Happy to report that we’re finally together as partners – for real this time 🙂 More tomorrow.”

Amid the immediate whiplash from such startling news, fans took to the comments section of both posts to voice their skepticism. Sure, the attractive pair has teased a romantic relationship in the past ⏤ playfully at that ⏤ but aside from the friendship they’ve built starring together on Queer Eye, both are in committed relationships.

Van Ness, or JVN as they are known to many (which is also the name of their hair care line, JVN Hair) is married, for starters. They and their partner, Mark Peacock, quietly tied the knot back in 2020.

Porowski has been with his longtime partner Kevin Harrington since 2019, according to Harrington’s Instagram, on which they just celebrated their third anniversary on July 20.

Fellow co-star Bobby Berk commented on the social media post with, “Ha! Here we go again!” seemingly confirming that the post is just another one of the almost-daily teases fans toss onto Van Ness’ Instagram page.

Clearly, while we love all things Queer Eye and would love nothing more than JVN and Porowski to throw caution to the wind, what’s more likely is that the pair has teamed up to collaborate on a new project, made evident by the “more tomorrow” bit of their respective captions.

To see what’s really going on, we’ll have to wait for the “more tomorrow” bit of the news, which should be arriving ⏤ checks watch ⏤ that’s right, tomorrow. Are we thinking a spin-off reality show starring the pair? A show in which Porowski cooks while JVN applies glam hair products? The possibilities are truly endless.

We Got This Covered will update you as the news unfolds.