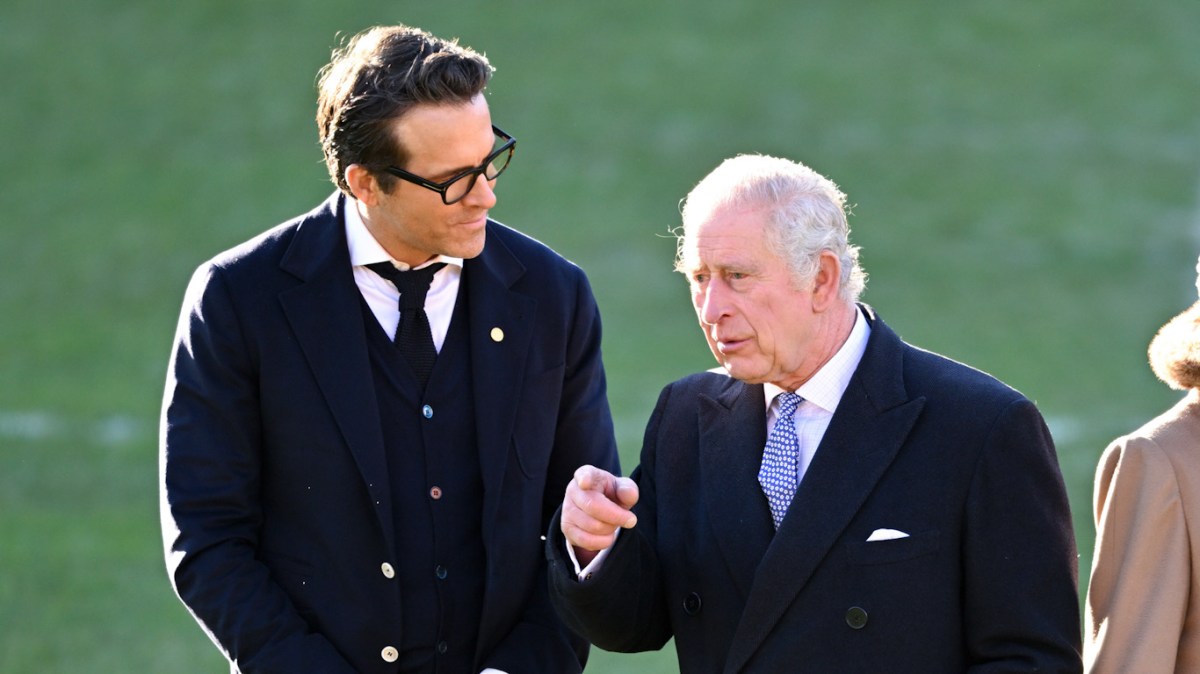 King Charles and Camilla, Queen Consort visit Wrexham Association Football Club where they will meet Hollywood actors, Ryan Reynolds and Rob McElhenney who bought the club in 2021, on 9th December 2022 in Wrexham, UK.

How many jokes does Ryan Reynolds have or is it just an endless supply that he keeps throwing around? His latest comes at the expense of a very important moment when King Charles III visited The Racecourse Ground in Wrexham and was greeted by the Deadpool actor.

As king, King Charles III and his wife Camilla, the Queen Consort, were visiting Wales to commemorate that Wrexham earned city status earlier this year. While in town, the royal couple decided to visit the home of the Wrexham A.F.C. That’s when Ryan Reynolds greeted them on the grounds, and true to his style, he just had to make a joke out of it. It’s more of a pun really, but a joke is a joke.

Certainly appreciative of the visit, Ryan Reynolds has been busy trying to revive the club and raise the status of the city since he is in fact one of the owners. Along with Rob McElhenney, the creator and star of the FX TV series It’s Always Sunny in Philadelphia, the two were delighted that the king would grace their grounds, which puts the club on the global stage of awareness.

As far as the pun is concerned, Charles in Charge is streaming now on Apple TV and Amazon Prime if fans are willing to pay for it. If not, it’s a sitcom that lasted from 1984 to 1990 starring Scott Baio, Willia Aames, Nicole Eggert, Alexander Polinsky, and Josie Davis.

For an actor from Vancouver, did Reynolds ever dream of meeting a king? Even as an up-and-coming actor starting to get famous and meeting the woman of his dreams, did he wonder if he had ever become worthy? Some fans never knew that Reynolds would one day have that kind of clout.

Reynolds must be stoked. At least, his fans are for him. To honor his deadpan sense of humor, one fan hits the nail on the head as if meeting the king isn’t anything special.

From the king’s perspective, does he know Ryan Reynolds? Has he ever watched anything that he’s been in? It would be interesting to know if he had no idea who he was meeting when he agreed to catch a game.

For aiding to lift a town to city status or for turning a team around to come in 2nd in the National League of English Football last season, is that good enough to be Knighted? Can anyone look that up in the user’s manual?

In reference to the docuseries tied to the pun, Reynolds has plenty of fans who would watch Season 2 of Welcome to Wrexham streaming on FX. If anyone can make it fly, it’s Reynolds’ partner McElhenney who already has it in with the network.

Of course, Reynolds was excited to see the king on his grounds. That would be an honor. If someone could just tell the king who Ryan Reynolds is, he might look just as happy.