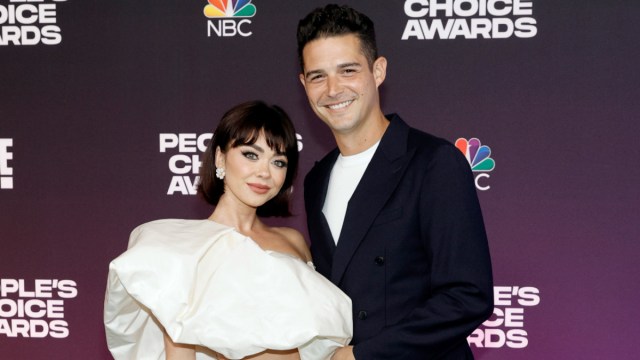 Modern Family star Sarah Hyland and former Bachelorette contestant Wells Adam were married in Solvang, California, over the weekend in a ceremony surrounded by family and friends, as well as many of Hyland’s costars from her long-running ABC series.

Sofia Vergara, Jesse Tyler Ferguson, Julie Bowen, Nolan Gould, and Ariel Winter were all in attendance, many of whom shared snaps from the reception on Instagram. Although sadly, there were, unfortunately, no photos of the bride and groom — but we can almost certainly expect those to pop up in a glossy People exclusive in the coming weeks.

“Wedding weekend,” Vergara captioned a photo of herself wearing party attire, leaning against a silver convertible. She likewise shared a handful of other candid snaps of herself, Ferguson, his husband Justin Mikita, Gould, Modern Family producer Rachael Field, and her son Manolo.

Mikita likewise shared an intimate photo of his husband and his onscreen niece and nephew, captioned simply “family” with a heart.

Likewise, Bowen shared a photo of herself, Ferguson, Gould, and Field sitting down for breakfast before the festivities started. “Yay! Just…yay. I love my fake family,” she wrote.

Hyland, 31, and Wells, 38, first became an item in 2017 after his stint on Jojo Fletcher’s season of The Bachelorette and the fourth season of Bachelor in Paradise. Over the course of the season, Hyland regularly tweeted about Wells, and eventually, he reciprocated the attention and slid into her DMs. And the rest, as they say, is history.

The couple first became engaged in 2019 but had to postpone their August 2020 wedding due to the COVID-19 pandemic. “Two years of would-be marriage bliss,” Hyland captioned a black and white photoshoot of their would-be wedding date just a week before they finally walked down the aisle. “I love you to Pluto and back,” she added.

Mazel tov to the happy couple.