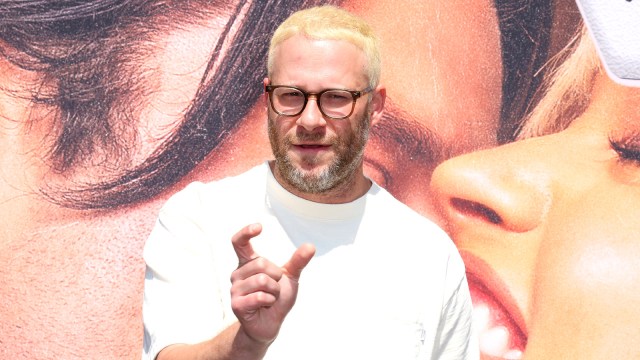 Seth Rogen is currently experiencing a sort of Hollywood glow-up, which is equal parts thrilling and infuriating, as the phenomenon only seems to apply to men of a certain age. Still, we can’t hate on Rogen too much since the 40-year-old seems like not only a genuinely good dude, but is also one of the hardest people working in the industry — between jugging his acting, directing, screenwriting, and producing gigs, as well as running his own cannabis lifestyle brand, Houseplant.

It’s the latter endeavor that brought Rogen to the internet’s collective attention over the weekend, as he previewed his latest “gloopy” ceramics creation days before the limited product will be available on the Houseplant website.

“I made more gloop,” Rogen tweeted, along with a short video of himself rolling a joint, taking a puff, and ashing into the new ashtray, all the while once again sporting matching Gloopy ceramic nails. “Gloop is back, in lilac and orange,” he said as the camera panned to his newly buzzed and bleached hair. (He also followed up with a link that fans can sign up to for early access.)

This actually isn’t the first time Rogen has sported bleached hair — as you can see in the header image, above, he was sporting the same look at a Pam & Tommy event earlier this month. But for many fans, this was the first time seeing Rogen’s new look, and let’s just say they were, uh, verklempt at the hotness.

“When did I miss Seth Rogen yassification era???” tweeted one user incredulously, while another wrote: “Let’s just take the time to appreciate blonde Seth Rogen.”

“Seth Rogen is literally so fine god help me,” added another user, seemingly in reference to the video.

Others praised, and justifiably so, Rogen’s ability to effortlessly roll a joint while wearing the bulky nails.

“Committed!” exclaimed another user, while zooming in on his handiwork.

“The fact you rolled that with nails and then THE HAIR!!!!! My king,” exclaimed comedian Chris Klemens.

Rogen debuted his first Gloopy ashtray back in April, which quickly sold out. At the time, he explained his inspiration to the HYPEBEAST YouTube channel.

“You know, I do a lot of hallucinogenic drugs,” the Sausage Party star admitted, with his trademark laugh. “And the idea of making things that were outwardly psychedelic was really appealing to me.” He explained that his “pottery journey” began after trying his hand at other creative outlets, such as painting and photography.

“It’s a lot of trial and error, and things go wrong. Like it’s a very volatile art,” he joked. “There’s a million things that can go wrong … I’ve probably destroyed the most things just by like, bumping into them a little tiny bit.” “It’s a humbling craft,” he added.