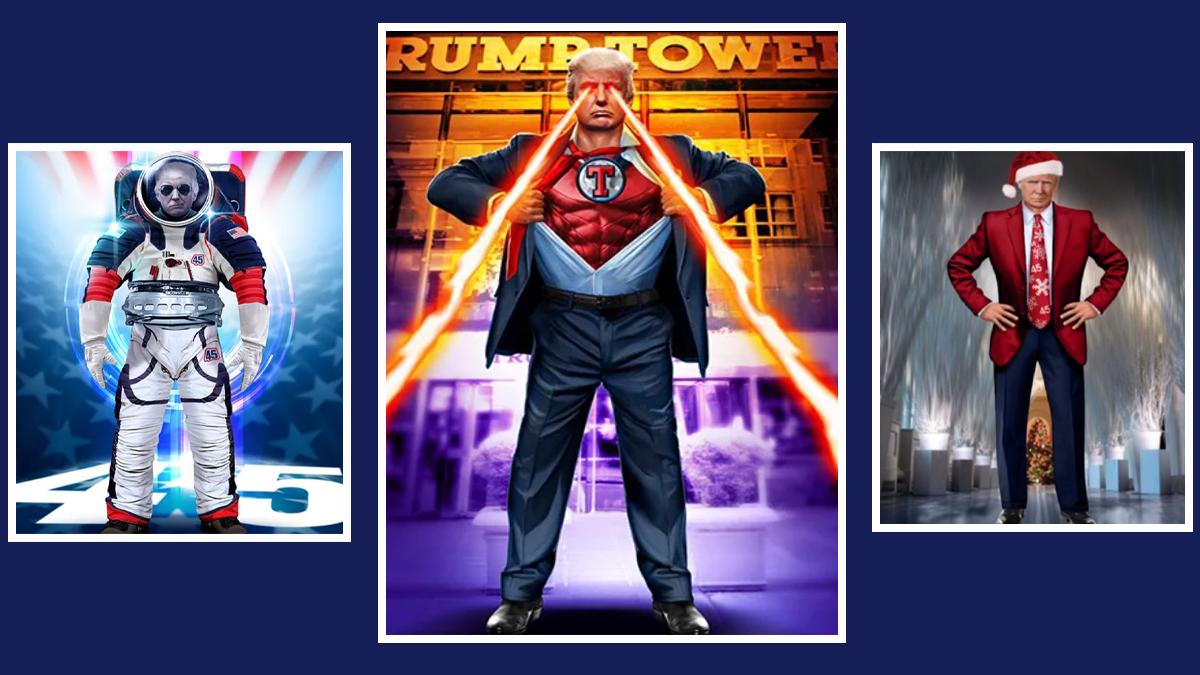 Instead of trading baseball or Pokémon cards on the playground, people can now trade cards featuring the likeness of former President Donald Trump.

Since there are 45 different cards, the question is which ones are the best and worst designed. The ones designed from real photographs, such as the golfing card or even the card with blocks of gold flying around him look more like the actual person. The cards where he has had his head digitally placed onto another person’s body, such as the superheroes, pilot, or even the race car driver, do not look like very good quality graphic design. Of course, the look of the cards is subjective, as is the value perceived by the customer. While not all the card designs have been revealed, here is our pick for the top 10 best and worst cards.

This card looks like a real image was used, which makes it look like an official photo for a Christmas card. The long hallway featuring white trees famously decorated the White House during Christmas in 2017, during Trump’s first Christmas as president. The stark red jacket contrasts well with the white trees running the length of the hallway.

There’s so much wrong with this card. Photoshopping what looks like a cross between Trump and President Joe Biden, this card is just creepy and should never have been approved. Unlike most of the other images, which have a 45 emblazoned somewhere, denoting Trump as the 45th president, this image has a 47, with the presumption that he will also be the 47th president.

With Trump superimposed on a background with gold blocks flying around, this image somehow works. Before becoming president, Trump was one of the nation’s most influential businessmen. He was famous for his money and extravagant lifestyle long before taking the Oath of Office. He also co-produced and hosted The Apprentice and The Celebrity Apprentice.

Donning a superhero suit underneath his regular suit and tie, the former president has laser beams shooting out of his eyes as he stands in front of Trump Tower. On the video message announcing the cards, Trump said the artwork pertains to his life and career. Since the real estate mogul owns Trump Tower and a host of other hotels and casinos around the world, it is presumed the image is representative of him destroying his competition.

Forget baseball, football is America’s favorite pastime and this card, featuring Trump holding a football, with the stars and stripes flying overhead, feels very patriotic without being as over-the-top as some of the other cards.

Trump’s head has been poorly Photoshopped onto the body of a Texas Ranger. Shortly after becoming president, Trump was gifted a white Stetson, which is how this image may pertain to his career. That’s a big stretch. Maybe – that’s a big maybe – if Trump were actually from Texas this might work, but probably not.

Using a real photo of Trump golfing, this image stands out as one of the best designed cards. Like the Race car driver, however, the number 47 is displayed on the image. Whether this was a mistake or just a presumption, we may never know. This card works well because it looks like a promotional illustration a golf course might use to promote an upcoming tournament. If all the cards were like this one, using real images to capture the man, these cards would probably be better received.

In this unfortunate image, Trump’s head was poorly Photoshopped onto the body of an aviator. His head is disproportional to the body and the whole thing screams of bad graphic design. The image shows him standing on top of the Earth, with a beam of light shooting out from the Earth to the moon. Trump famously stated in 2017 that he wants to send astronauts back to the moon.

The 45th president sports some boxing gloves in this golden-hued card that somehow comes together and just works. The illustration shows the former president standing in the center of a boxing ring, presumably prepared to knock out his opponents.

Undoubtedly the one everyone is making fun of, this NFT has Trump’s head Photoshopped on a superhero body. Trump first teased the announcement pertaining to the trading cards on his Truth Social platform, stating that “America needs a superhero.” This card is the worst of the lot and is possibly the cheesiest thing ever conceived.