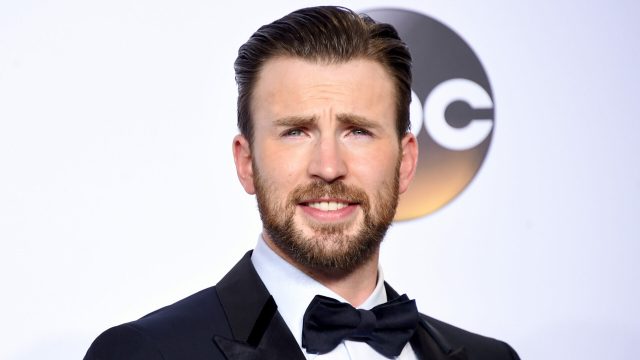 Chris Evans has been named People‘s Sexiest Man Alive for 2022, but he’s been our sexiest man alive since we first laid eyes upon him. You can’t blame us, there’s something almost magical about the guy, and his dog-loving warmth and zest for life just put him that much higher on a pedestal.

So, fans took to social media to immediately celebrate Evans’ finally getting the title of Sexiest Man Alive and the cover of People Magazine‘s thirst-inducing issue. We were also treated to an influx of pictures of Evans looking delectable as he celebrated the honor.

Speaking to People‘s Kara Warner, Evans seemed most thrilled about his mom’s joy.

“My mom will be so happy. She’s proud of everything I do but this is something she can really brag about.”

Of course, the star is a little less thrilled about discussing his new title. It’s not that he lacks gratitude, but it’s something he feels a little bit odd celebrating.

“This whole thing is tough to be interviewed about. It feels like a weird form of humble bragging.”

In a nod to Evans’ personality, it’s just another thing to love about him. He exudes appeal; no one denies that, but he isn’t going to jump in your face and remind you that he’s the sexiest man alive. Warner notes he’d probably enjoy not talking about the title at all. However, he plans to reflect on it when he thinks of his glory days as he ages. Evans used the words old and saggy, but that’s not exactly the future any of us expect for Evans. He’s going to keep aging like a fine wine.

While it took until 2022 for Evans to be crowned the sexiest man alive, we’re looking back at all the times he proved it long before People honored him. Here’s to Evans, who won’t humble brag about himself, but don’t worry — we’ll do it for you.

1. Jake Wyler – Not Another Teen Movie

Jake Wyler was the stereotypical high school jock and shouldn’t have been at all charming, The name of the game in this movie was to poke fun at everything “normal” about cheesy high school romantic comedies, and Chris Evans came to work.

Even though he was a walking stereotype, something about him was still almost painfully handsome. Plus, everyone remembers that one whipped cream scene that caught all of our attention.

We’re glad Evans wasn’t “that guy” in his real life, but he sure did sell a convincing one in Not Another Teen Movie.

The Nanny Diaries saw Chris Evans star alongside Scarlett Johansson years before their days together in the MCU. It’s a movie full of fallacies and the attempt to perfect the American dream, whatever that is. Annie, or Nanny, helps save a little boy’s life and is immediately hired as his nanny, and her life is anything but normal in the days that follow.

One thing that brings her some sense of normalcy is the “Harvard Hottie” she falls in love with, played by Evans. His name throughout the movie is really Harvard Hottie too, until the end when we learn his real name is Hayden. Hayden is sweet, charming, handsome, and intelligent — and he helps Annie find out what she truly wishes for in this life.

Curtis Everett is a darker role for Evans and a pretty powerful one at that. The movie highlights the last remaining survivors of a fallen society as they travel together on a train. The cars are separated by societal class, and Everett is the “leader” of the lower class.

He’s brutal and carries a “take-no-crap” attitude for the movie, which is to be expected. The “lower class” societal passengers aren’t treated to the luxuries that the higher class survivors are given.

He’s also not in the “normal” Chris Evans shape in this film, or he’s not supposed to be. Having spent years on a train, life took a toll on him, but it certainly didn’t erase his charm and good looks.

4. Nick Vaughan – Before We Go

If you’ve never seen Before We Go, we recommend stopping everything else you’ve got going on today to watch it. The movie is a romantic drama, and Evans steals the show as Nick Vaughan.

He’s busking in a train station when he notices a woman rushing and dropping her phone. She returns, having missed the train, and they talk as he gives her the phone back. Brooke has been robbed and trapped in the city, but she must go to Boston by morning. Nick’s credit card has expired, and he can’t help her cause, so they set out on a night of adventures in hopes of getting her where she needs to go.

They’re not meant to fall in love. They’re not even meant to cross paths for more than a moment, but they do fall for one another by the film’s end, and audiences also fall for Nick. He’s charming, handsome, and hopelessly romantic; it’s the dream guy situation, and we’re sold.

Did everyone who watched What’s Your Number? fall in love with Colin Shea? The quick answer is yes.

At the beginning of the movie, Shea is the kind of guy you’ve likely been warned to stay away from. He’s so charming he simply can’t be up to any good, and he frequently hides from women who had unintended sleepovers at his apartment.

The other side of Shea is the thoughtful side, the one who goes on an adventure with his neighbor to find true love with one of her exes. Of course, the pair fall in love instead, and we can’t blame her. In fact, we’re looking to move into an apartment now with a handsome guitar player to live across the way and sweep us off of our feet, too.

The thing is, he has to be Chris Evans for it to work; we didn’t make the rules.

Knives Out was a fantastic movie for several reasons: one of those being Chris Evans as Ransom in that dreamy cream-colored sweater. That, our friends, is the definition of boyfriend material.

Ransom was a jerk in the movie, there’s no getting around that, but we loved seeing Evans in the role. He wore the “worst character” badge with a sense of charm that made us look twice (or thirty times) when we should have been looking away.

While he doesn’t play the bad guy in movies often, we sure do love the glimpses he gives us.

We have to be honest, when we first saw the trailer for Gifted, we wanted to watch the film because Evans was starring in it. Once we got over how handsome he looked playing the uncle to an incredibly gifted little girl, we realized that more than his good looks would ultimately draw us in.

Adler didn’t anticipate raising his niece, Mary, but he’s doing his best, and in all of his vulnerability and honesty along the way, we just couldn’t get enough.

Is there anything sweeter than Chris Evans as Dodger’s dad? We think not. Evans has played many a character that fans fell in love with, but the truth is, we love him as himself most of all.

His heart for people, animals, and charitable organizations is as admirable as it is something fans fawn over. When it comes to Dodger, it’s enough to make you tear up. Evans adopted Dodger from a shelter, but the truth is, they saved each other, and he is the proudest dog dad ever.

We love seeing the snaps and images he shares of his life with Dodger, and it’s a big reason fans adore Evans so much.

9. Chris “Helps Betty White to the stage” Evans – himself

What’s better than Chris Evans being generally chivalrous? Evans helping Betty White take the stage when she was receiving an award.

White won the People’s Choice Award for Favorite TV Icon, and as she made her way to the stage, Evans offered to help get her there safely. Holding out his arm so she could hold onto him, he walked her slowly to the stage ad up the stairs so that she could receive her honor.

It’s a moment that went wild on social media and in entertainment circles, and it wasn’t the first or last time Evans stepped in to help someone get to the stage. It just so happens that this moment is a fan favorite because Evans and White are both national treasures.

Last but certainly not least is Chris Evans as Steve Rogers. From the skinny kid who grew up in Brooklyn to “America’s Ass,” Evans wore the Captain America mantle with pride and bravery.

There are several scenes when Steve Rogers was the man who stole our hearts, but a particular one stands out to us: and we’re sure it’s a favorite of many who love Cap.

A fight ensues when he’s trying to get Bucky Barnes out of “The Winter Soldier” mode, and Bucky attempts to fly off in a helicopter. Steve Rogers literally holds the aircraft to a building with only his arm strength, and jaws everywhere hit the floor.

The definition in those arms? Be still our hearts. Of course, there were other shining moments for Evans as Rogers, but that one simply takes the cake.

So, here’s to Chris Evans, People‘s Sexiest Man Alive in 2022, and the owner of our hearts since he first stepped into the entertainment realm. What a dreamboat!