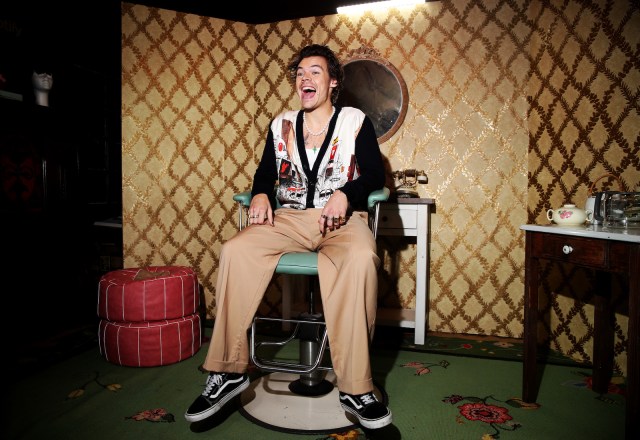 A surprising fun fact about Harry Styles is that he was strongly interested in starring in Baz Luhrmann’s new film Elvis. Ultimately, the part went to Austin Butler not because of a lack of talent or enthusiasm on Styles’ part, but simply because Styles is an icon in his own right. Luhrmann stated on the podcast Fitzy & Wippa: “The real issue with Harry is, he’s Harry Styles. He’s already an icon.”

Styles has certainly come a long way since his One Direction days. His natural showmanship and charisma have played out not only on the page, stage, and screen, but in his everyday fashion choices. His bold gender-nonconforming outfit choices have inspired his fans, so the natural progression would be…a Harry Styles inspired fashion line. Thankfully, Gucci agreed.

Styles first appeared for Gucci in a tailoring campaign in 2019. This was only the beginning for what would become a beautiful partnership or “creative complicity” in Gucci speak. Styles would go on to co-chair the 2019 Met Gala dressed by Gucci, do additional ad campaigns, and become a brand ambassador of sorts.

Styles developed such a strong working relationship with Gucci’s creative director Alessandro Michele that the two working together on a clothing line seemed inevitable. Michele stated in a press release:

Harry has an incredible sense of fashion. Observing his ability to combine items of clothing in a way that is out of the ordinary compared to the required standards of taste and common sense and the homogenization of appearance, I came to understand that the styling of a look is a generator of differences and of powers, as are his reactions to the designs I have created for him, which he has always made his own; these reactions restore me with a rush of freedom every time. The idea of working together came to me one day while we were talking on the phone: I proposed creating a ‘dream wardrobe’ with him, starting from those small oddities that come together in childlike visions.

What’s in a name?

From that conversation with Michele, the Harry Styles X Gucci HA HA HA collection was born. The name HA HA HA is a combination of the initials of Harry and Alessandro’s names. It also celebrates their main mode of communication: laughter and laughing emojis. It represents the flow of ideas between Styles and Michele.

The collection is made up of 25 looks. Its feel is that of classic English tailoring with a whimsical, childlike twist such as fruit prints and vibrant colors. Michele describes it as “the look of a lord who morphs into a rock star.” Michele goes on to say that the collection is “a mix of aesthetics from 1970s pop and bohemian to the revision of the image of the gentleman in an overturned memory of men’s tailoring,” A recurring motif is that of a grumpy bear who appears on the tags and in some of the jewelry pieces.

The collection is set to hit stores in October. Prices have not yet been officially released but remember, this is Gucci, not Old Navy, so save your pennies accordingly.