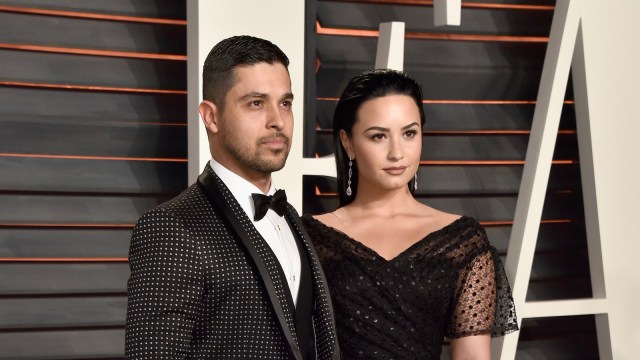 That 70s show star Wilmer Valderrama first met singer Demi Lovato in 2010 at Valderrama’s L.A. house while shooting a Voto Latino PSA encouraging Latino Millennials to vote. Lovato was seventeen at the time of the shooting. The two began dating officially following in 2011, and broke up in June of 2016. Six years later, Lovato released her single “29” from her album Holy Fvck. She was the same age as Wilderrama had been when the pair began dating, and many found the lyrics to be a not-so-veiled reference to the pair’s significant age gap.

“Petal on the vine, too young to drink wine
Just five years a bleeder, student and a teacher
Far from innocent, what the f***’s consent?
Numbers told you not to, but that didn’t stop you

Finally twenty-nine
Funny, just like you were at the time
Thought it was a teenage dream, just a fantasy
But was it yours or was it mine?
Seventeen, twenty-nine”

The now 42-year-old Valderrama has a long history of dating younger women, some closer to his age and some significantly less old. His current fiancée and mother of his daughter, model Amanda Pacheco, is older than Lovato, but still 11 years Valderrama’s junior. The actor has been linked to numerous celebrities and rising stars, including Rihanna, Christina Milian, Avril Lavigne, and Jennifer Love Hewitt (who has completely denied that the two ever dated), but his more-or-less on record relationships have always been with women that are younger.

Here are Valderamma’s most significant relationships over the years, with age differences noted:

Valderrama dated This Is Us actress Mandy Moore back in the early years of the new century, when he was 20 and 21 and Moore, then best known for her singing career, was 16 and 17. According to US Weekly, Moore told Howard Stern that she met Valderrama “at a photo shoot for, like, some teen magazine literally when I was 15. I was [pretty innocent]. Again, like never french-kissed a boy. He was like my first real, true boyfriend.” In 2006, Valderrama told Stern that he was the first person to have sex with Moore.

She told Stern that was not the truth. “He did not [take my virginity]. I dated him when I was 16 and 17 … I love him and I still love him. He’s a very good friend and that’s why I was so shocked by it because not only was it a fib, but it was so unlike him and so uncharacteristic,” she informed the radio host, as reported by US Weekly. Moore stated that the two are now on good terms.

Lohan, 18 at the time, and Wilmerrama, then 24, had a whirlwind romance while she was approaching the height of her fame following the release of Mean Girls, and he was enjoying the continued success of That 70s Show. The couple dated for two months, got engaged, and called it off just two months later. Lohan later revealed to Howard Stern that Valderrama was her “first guy” and said, “he’s a good guy,” according to US Weekly.

Shortly after his breakup with Lohan, rumors began to fly that the 25-year-old Valderrama was dating the then-21-year-old singer Ashlee Simpson. Simpson has denied several times that she and Valderrama have ever had a romantic relationship, for the record, but she has admitted that her 2005 single “Boyfriend” was about Valderrama and his ex, Lohan. At the time of its release, Simpson told MTV News “It’s not about one person in particular, it’s just something every girl can relate to,” but in 2018 she admitted during a round of “Plead the Fifth” on Watch What Happens Live With Andy Cohen that she did write the song with Lohan and Valderrama in mind, according to US Weekly.

Valderrama’s relationship with Lovato, who is 12 years his junior, was his longest-lived to date, lasting nearly six years, with an occasional break along the way. Months after meeting her, Valderrama and Lovato were spotted making out in front of his home. The pair quietly dated each other off and on for the next few years until 2014, when they took to mutually gushing over each other online and on social media. The pair called it quits in 2016.

In April 2020 Lovato appeared on Jameela Jamil’s “I Weigh” podcast and stated “I was afraid of fully letting go of people. And now that I’ve been able to fully let go out of people, that was another thing that I’ve had to learn when it comes to coming toxic people out of your life. If they’re an ex, it’s for a reason,” according to Us Weekly.

Valderrama met his wife, model, and PADI-certified scuba divemaster Amanda Pacheco through a mutual friend when he was 39 and she was 28 while he was working on the CBS drama NCIS. The two were engaged only nine months later, in 2020. Their first child, a daughter they named Nakano Oceana, was born on February 15, 2021.