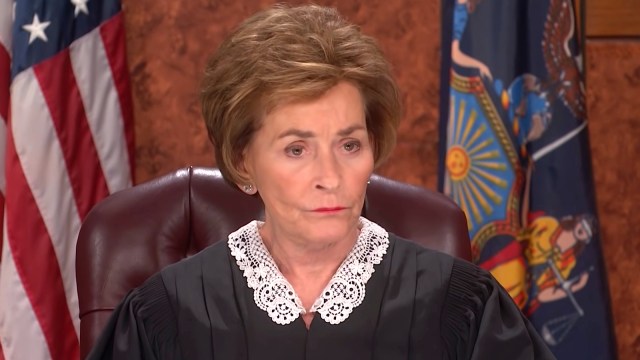 Judith Sheindlin, otherwise known as Judge Judy, or America’s toughest family court judge, has been in the legal game since 1972 when she first became a lawyer. After earning national recognition with a Los Angeles Times profile in 1993 and a segment on 60 Minutes that same year, it became clear that not only was Sheindlin a great lawyer, but her take-no-prisoners, tell-it-like-it-is personality was also great for TV.

In 1996, CBS launched Judge Judy, a courtroom reality show that would go on to break daytime TV records and make Sheindlin a household name. After 25 years, the show finally ended in 2021, but Sheindlin herself was in no hurry to retire. Her new show, Judy Justice premiered its first season on Amazon Freevee in 2022, and Judge Judy is once again the talk of the courtroom.

While her professional career has been a series of successes, her personal life has seen challenging times, namely a marriage, divorce, another marriage, another divorce, and a re-marriage. Where does the judge stand on the side of love today? Here’s what we know.

Who is Judge Judy married to?

Sheindlin is currently married to the honorable Jerry Sheindlin, her second husband. The two married in 1977, just one year after her first marriage to Ronald Levy ended in divorce. Sheindlin claims her first husband, Levy, saw her job as just a hobby, which is, in hindsight, the biggest understatement of the century. Ultimately, the marriage wasn’t meant to be. They share two children together.

But just because she met Jerry Sheindlin and got married doesn’t mean it was smooth sailing from there on out. After the loss of her father in 1990 – six years before Judge Judy hit the air – her marriage to Jerry was put to the test. In What Makes a Marriage Last, she shared that her desire to have Jerry take care of her after her father’s death was met with uncertainty.

“I wasn’t asking for anything unreasonable, and he wasn’t being unreasonable saying that he really didn’t know how to do that,” she said. “He was 55 and had lived a certain way all his life. He couldn’t even conceptualize taking over that role. He just couldn’t.”

For a while, it looked like the two might not make it. They divorced in 1990 but remarried in 1991, proving that sometimes relationships just need a break to come back stronger than ever. “I missed her presence the very first week that we were separated,” Jerry said. “It was the first time in years that we didn’t get to see each other every single day. It was such a strange experience.”

Judy is 79 years old as of this writing, while Jerry is 88. They are still going strong, almost rounding out a total of 45 years together. They have five kids – three from her first marriage, two from his – and share 13 grandchildren. Sheindlin’s new show Judy Justice is currently available on Amazon Freevee where she continues to tell it like it is.