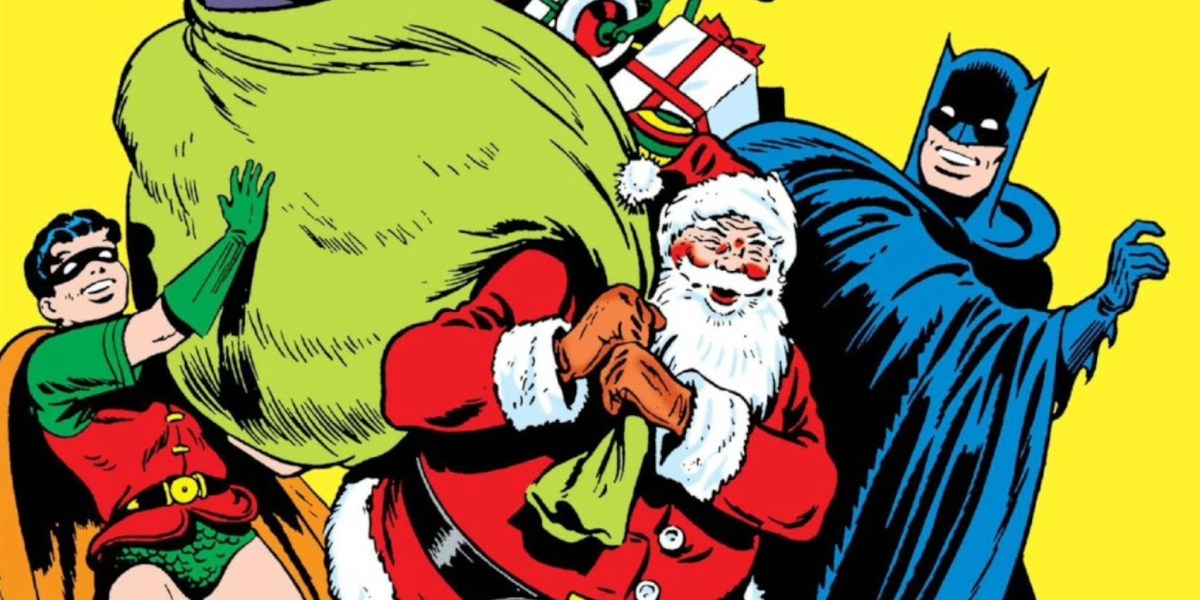 It is said that crime never sleeps. Nowhere is this more true than in Gotham, where criminals don’t even stop for lunch in this legendary city. Christmas is no exception, as they frequently use the holiday as an excuse to enact their biggest evil schemes, forcing Batman to jump into action. Just how has the Caped Crusader celebrated Christmas during his long and storied history?

Batman Returns sees the Dark Knight fighting the Penguin and the Red Triangle Gang, a group of former circus workers who have kidnapped children around the country. Most of this film is set around the Christmas period, and this adds a fun wintery twist to the film’s gothic aesthetic. One of the film’s best and most memorable scenes sees Penguin murder Gotham’s Ice Queen during the tree lighting ceremony, meaning that the people of Gotham had one unhappy holiday that year.

8. Tracking down The Joker – Batman: The Animated Series

Batman: The Animated Series is one of the most beloved Batman projects, and “Christmas with The Joker” is a great Christmas episode and one of the show’s overall best episodes.

One Christmas Eve, the Joker escapes from Arkham Asylum and kidnaps Commissioner Gordon, Summer Gleeson, and Harvey Bullock before taking over the TV airwave to host his own “TV special.” It forces Batman and Robin to find the Joker’s broadcast location before the hostages come to harm.

The New Batman Adventures episode, “Holiday Knights,” puts a fun twist on the usual Batman format. The episode consists of three shorts, each set on a different day in December. The first short, set on Dec. 22, follows Poison Ivy and Harley Quinn as they embark on a Christmas shopping spree. This isn’t any regular outing, as Ivy has used some mind-controlling lipstick to drag Bruce Wayne along with them, forcing him to pay for everything. An adorably cute special, this is an early outing for DC fans’ favorite power couple.

The other two shorts are also great, featuring Batgirl fighting Clayface while Batman and Gordon meet up for a drink on New Year’s Eve.

The year 1944 was a weird one for Batman, and “A Christmas Peril” might be one of the oddest Christmas stories in comic book history. Found in Batman #27, this story sees Batman and Robin discover that a young rich boy is running a Christmas tree price-fixing racket when his men beat up a store owner who refuses to take part.

Batman does what any sensible adult would do in this situation and kidnaps the boy, dragging him around Gotham to give him an experience that blends A Christmas Carol with It’s A Wonderful Life. Plus, the boy’s uncle likes to dress like Santa Claus for reasons that are never fully explained, leading to a series of utterly surreal visuals. This, plus Batman being way more violent than his modern incarnation, makes this comic feel like a fever dream.

5. Being a terrible guardian – Detective Comics

Sometimes the things you don’t do send a message, and this is apparent in the story “Slayride” found in Detective Comics #826. After Robin does a mission alone, he accepts a ride from a stranger only to quickly realize that it’s The Joker. The rest of the comic is a tense hostage situation as the Joker goes on a rampage with Robin in tow.

It is well known that the Robin mantle comes with a massively reduced lifespan, but it has to be asked where Batman was during all of this. He turns up at the end, making it clear he was in Gotham during the events of the story, but clearly he had something more important to be doing.

4. Educating robots/brooding – Batman: The Brave and the Bold

Batman: The Brave and the Bold was never afraid to get weird, and “Invasion of the Secret Santas!” is no exception. The episode sees Batman and Red Tornado fighting Fun Haus and his evil toy robots. At the same time, the robotic Red Tornado is trying to understand Christmas Spirit. Alas, Batman isn’t very helpful since he’s too busy brooding when this whole thing reminds him of his parents.

The DCU Infinite Holiday Special is a fascinating comic. This set of festive shorts landed in 2006, and the book features a story, “Yes, Tyrone, There is a Santa Claus.”

In this tale, Superman receives a letter from a boy asking if there is a Santa Claus. Keen to make the boy happy, the Man of Steel buys gifts, rents a Santa outfit, and flies to the boy’s home. On the way, he meets Batman, who talks him out of the Santa costume, declaring it to be a silly gesture. Superman decides to visit in his usual outfit, but when he arrives, he finds Batman is already at the house. To make matters funnier, Batman is dressed as Santa and is handing out gifts. Thus, in the spirit of Christmas, Superman punches Batman in the face. Let’s be honest—in this instance, Batman had it coming.

2. Visiting Florida – The Brave and the Bold

Looking back at old comics can often be a weird experience. Looking at 1978’s The Brave and the Bold #148 is no exception. This issue features a Christmas story where Batman has to take down a gang of cigarette smugglers. Today it’s oddly quaint to see Batman drop everything to fight a group of people whose main crime is flaunting the Food and Drug Administration’s regulations, but the ’70s were a very different time.

The last part of this story sees Batman and Plastic Man heading to Florida to find the gang’s leader and recover some Christmas decorations his men have stolen. We can only presume that Joker decided to take Christmas 1978 off.

Batman is a man of many talents. Not only is he a genius, a combat expert, and a damn fine dancer, but he is also an excellent caroler, as proved by “The Silent Night of Batman” from Batman #219, which arrived on newsstands in 1969. The story is utterly unique and unlike any other Batman comic. The story follows various civilians who are considering doing something horrible. At the last moment, they see Batman and change their minds. The whole time, Batman is singing carols with the police. At the end of the strip, Batman suggests that the Spirit of Christmas is responsible for this magical occurrence, but readers are left to make up their own minds about what happened.