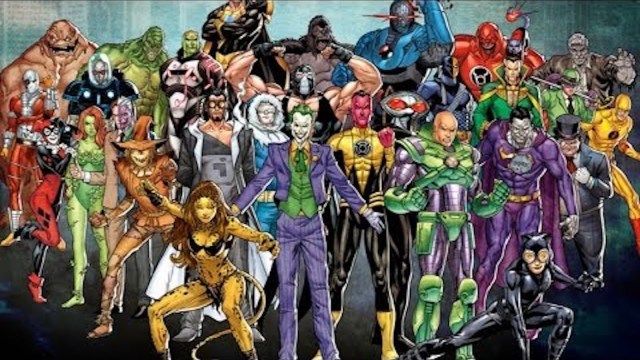 It is no secret that the DCEU has become popular given the rise and love of superheroes that has taken the world by storm. Everyone loves to follow a good hero that has their head on straight and saves the day, however with every good superhero comes a powerful villain that the hero needs to defeat. Here are the 10 most powerful villains within the DCEU.

The ability to go back in time as one of the fastest men alive helped the Reverse Flash have a horrible impact on the life and childhood of Barry Allen. The power to kill with just the speed of his hand has helped him cause chaos and terror for those who are around him. The Reverse Flash is also one of the smartest villains within the DCEU, making him all the more dangerous to be around if you found yourself in the unfortunate situation. Super speed and super brains make for a powerful supervillain.

Circe has the powerful ability to manipulate reality and change what people see. She was even able to change Wonder Woman back into the original clay form that she originated from. Being immortal as well as having the skillset to resurrect someone back from the dead makes Circe one of the most powerful and magical people within the DCEU.

Ares, the God of War, is one of the most powerful gods in the entire universe. He is immortal and can travel easily across dimensions, something that is not as easy as it might sound. When fighting, Ares can summon pure darkness against those who dare to challenge him. Ares is also a nemesis of Wonder Woman, meaning that Wonder Woman has quite the task trying to keep all of these immortal villains in check.

Wielding the Heart of Darkness means Eclipso is one of the most powerful beings around. It allows him to gain access to the minds and even the powers of those who dare come near him, making Eclipso seemingly the most powerful one man army to ever exist. Eclipso was created as an image of God’s wrath, meaning he can manipulate reality and seemingly do whatever he feels whenever he wants.

The Green Lantern always has his hands full whenever he is matched up against Parallax. The supervillain is able to decode what someone’s biggest fear is, and then use it in a demonic and terrifying way against them. Not only Parallax been able to do this against Green Lantern, but he has also been able to do it against the likes of Wonder Woman and Superman, two of the most powerful superheroes within the DCEU. Being immortal is a theme amongst the strongest and most powerful villains, and Parallax is no different to that.

The ability to incite fear and panic amongst citizens when you do not have any super powers is one of the most powerful thingsa villain can do. This is what the Joker has been able to achieve throughout his existence. Whether robbing banks, threatening to blow up ships of people, or just creating chaos however and whenever he sees fit, the Joker makes people dread him.

When anyone thinks of powerful heroes or villains, they automatically think of strength first. This is what Doomsday possesses so much of, to the point that he was actually able to defeat Superman in a battle. The strength it takes to beat Superman is almost unthinkable, yet Doomsday was the one who was able to successfully pull it off. Doomsday is also able to heal himself on the fly, making him seemingly invincible also. Not needing to stop to take a break to recover makes him an almost impossible villain to beat and destroy.

Darkseid is one of the most unstoppable villains in the DCEU. He is invincibile and invulnerable, while also in charge of an incredibly large army with some of the most advanced technology around. Darkdeis is able able to shoot laser beams out of his eyes and is doing whatever he can to command life on all planets and not give anyone any hope.

Imagine taking all of the powers of Superman and handing them to a villain. That is essentially exactly what happened with Superboy-Prime. He is able to have all of the powers that Superman has, with some more. He can alter reality to however he sees fit, and also has a suit of armor that can enhance his powers and make himself as dangerous a supervillain there is.

The Anti-Monitor has the ability to destroy universes at a time, something that fans saw in Crisis on Infinite Earths, forcing everyone into one universe as opposed to the many thousands and infinite other universes that are out there. The Anti-Monitor also is in control of one of the most powerful armies in existence, making him seemingly unstoppable. With the ability to control energy, matter, and reality, he is basically able to control anything and everything to ever exist, making him the most powerful DCEU villain of all.