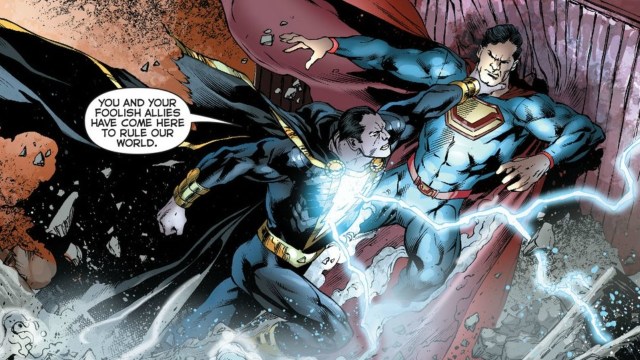 With the release date for the latest tent-pole DCEU movie Black Adam on the way, a lot of people are learning about what used to be a fairly third-tier DC character. This is expected, especially with movie star and former wrestler Dwayne Johnson in the titular role.

As more and more people become aware of the character and his powers, a question has revealed itself: is Black Adam stronger than Superman? Let’s dive in and find out.

Who is Black Adam?

Black Adam is absolutely one of the most complex characters in the DC universe. While he might not be that well known to casual DCEU enthusiasts and the general public as a whole, the character has been in the middle of some of the hottest DC stories of the last two decades.

He’s one of the best DC anti-heroes — with the power of a God and a love for violent activities. The character first showed up in 1945 and was created by cartoonist C. C. Beck and author Otto Binderwho, the duo who coincidentally conceived a fellow DC character, Shazam. Black Adam, AKA Teth-Adam, is an ancient pharaoh and the first human being to be granted with Shazam powers.

His acronym is a little different, with a more Egyptian twist. The S stands for Shu, which means stamina; the H stands for Hershef, which means strength; the A stands for Amon, meaning power; the Z is for Zehuti, meaning wisdom, and the M is for Menthu, meaning courage.

His name Teth-Adam literally translates to “might human.” Next, let’s dive into his impressive super-powered skill set.

What are Black Adam’s powers?

Just like the others imbued with the same type of power, Adam simply says the word “SHAZAM!” and he transforms into the all-powerful Black Adam and wields his powers. These include:

What are Black Adam’s Weaknesses?

Black Adam is vulnerable to certain types of magic, but they have to be significantly powerful. He can also be reverted back to his human self with his lightning attacks if he’s not careful. Honestly, that’s about it.

What are Superman’s powers?

Superman gets his power from the sun. He’s an alien from the planet Krypton and has a panoply of powers.

He’s incredibly strong, but he can be killed, and he’s susceptible to Kryptonite. Kryptonite is radioactive shards from his home planet and it reverts him to the limitations of a regular person. With prolonged exposure, he will die. Also, he was killed by Doomsday by getting beaten to death. Even Batman has almost killed him, but Black Adam doesn’t have that track record.

Superman is also vulnerable to electricity and has been seen recoiling from it in fights with Livewire and Deadshot. He’s also susceptible to Parasite’s energy drain, which also deals with electricity. However, Superman rarely uses his whole ability and has expressed concern in the past that he would kill people if he went full-strength. For example, he bested Darkseid and punched him shard enough to send him through three or four skyscrapers.

Who is stronger: Superman or Black Adam?

It’s not going to be an easy fight regardless, but when you stack them side-by-side and look at them from a statistical standpoint, it looks like Black Adam would have the advantage. Superman is strong, but he has too many weaknesses. Also, they’re matched pretty evenly as far as physical prowess but Superman doesn’t have clairvoyance, endless knowledge, and he’s also bound to his moral code to protect humanity.

Black Adam would know how to deal with Superman, he would know that Superman is weak to Kryptonite but also would know his weakness to electricity. Ironically, Black Adam’s marquee power is his lightning bolt, so Superman would have to be pretty careful when dealing with Black Adam.

In short, Black Adam has an answer for every one of Superman’s powers. They both have super speed, flight, strength and hearing, and are both immortal to a certain degree. If Black Adam incapacitated Superman and took him far away from the sun, he would best him immediately.

If Superman found a way to reflect Black Adam’s lightning bolt back at him, he would have a chance of beating him. There are a lot of variables involved, but Black Adam would have the advantage, and Superman would really have to work and be extremely careful to win the fight.

In the comics, however, most of the other superheroes don’t believe that’s the case. In fact, in Justice league #73, Black Adam is possessed by Xanadoth, the Lord of Chaos. While the Justice League discusses the issue, Batman says that Superman is off-planet. Green Lantern replies, “We certainly don’t need Lady Chaos jumping from Black Adam to Superman,” implying that they believe Superman is more powerful.

However, if you look at the stats, that doesn’t seem to be the case. So, it seems that we’re at an impasse. Hopefully, a future fight between Superman and Black Adam will clear the air.