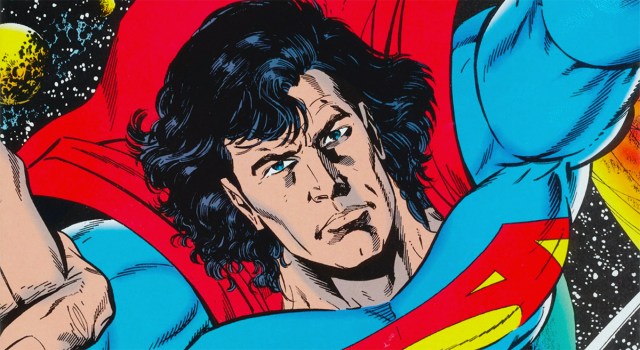 In 1993, Superman returned from the dead and brought something new with him. The reborn Man of Steel boasted a bona fide, superheroic Mullet of Steel.

Alright, not steel — but it was an impressive thatch of dark flowing hair and a distinctive look along with Superman’s new black suit and silver emblem. In a decade of character redesigns as the Modern Age of comic books asserted itself, Big Blue’s longer locks were symbolic. Along with Spider-Man clones and Rob Lefield convincing us that Marvel’s mutants needed massive guns, mullet Superman showed how far comics had come from the Golden and Silver Ages.

The comics have shown Clark Kent achieving a fine close shave using a mirror and his heat vision, but he didn’t take any superpowers to his hair even as his relationship with Lois Lane reached a new milestone. The mullet lasted an admirable three years until 1996’s The Wedding Album. It was a fitting time for a trip to the barbers. The Death Of Superman storyline sprung up from writer Jerry Ordway’s throwaway suggestion when DC was forced to delay a super-wedding to coincide with the events of ABC’s wildly popular TV adaptation, Lois & Clark: The New Adventures of Superman.

For a stand-in, The Death of Superman brought a great deal to the Superman mythos over nearly a year of crossover scraps, sorrow, and suspense. Many elements lasted longer than Supe’s new hair. But after almost 30 years, could Kal-El’s distinctive 90s look be returning?

DC Comics isn’t a publisher that misses an anniversary and is ready to mark 30 years of the epic Death of Superman event in Fall 2022. The original story arc was when the superhero first encountered villain Doomsday in a colossal fight that ended with both killing each other on the streets of Metropolis with two of the most powerful punches the world had ever seen.

The event spawned two huge follow-up events that form a classic ‘90s trilogy for the Man of Steel: World Without a Superman, and Reign of the Supermen. The latter was named in honor of the first story Superman creators Jerry Siegel and Joe Shuster wrote in 1933. Sixty years later, between June and October 1993, a new story arc brought us several potential Supermen, each dispensing a brand of justice inspired by the much-missed Superman. That reign ended when the real Man of Steel triumphantly revealed himself in his iconic black suit and infamous mullet.

DC Comics is marking the 30th anniversary with a deluxe anniversary edition of The Death of Superman that was originally masterminded by editor Mike Carlin, but the celebration doesn’t stop there.

The creative teams behind the original epic are also returning for the 80-page The Death of Superman 30th Anniversary Special #1, hitting comic shops on November 8.  With four new stories, Dan Jurgens and Brett Breeding, Roger Stern and Butch Guice,  Louise Simonson and Jon Bogdanove, and Jerry Ordway and Tom Grummett will take us back to the ‘90s to explore the lasting impact of Superman’s death. Those stories are:

The special will feature a stunning wraparound cover from Jurgens and Breeding and nine pinups and variant covers from some of comics’ biggest names. And it all ties into the return of Calrk Kent to DC Comics after taking time out for a humanitarian mission on Warworld and leaving Earth in his son’s capable hands.

In November, Action Comics will reach the crossover conclusion of the Kal-El Returns storyline with #1049. It’s only fitting that any returning Superman sports the appropriate hair, ready to help his son take on Doombreaker in the Anniversary Special.

Artist Roger Cruz’s variant cover of Action Comics #1049 (above) features a dashing take on Superman’s longer-haired days, even if Krypto doesn’t look too impressed with the hairdryer.

The mullet won’t be alone. DC is running multiple ‘90s-inspired variant covers throughout November, so brace yourself for a nostalgia overload, including the iconic purple-suited Catwoman, and Batman taking on Azrael.

In November 2022, we expect Superman’s mullet to rise above all the other variant covers and pride of place in waiting rooms at hairdressers across the globe.