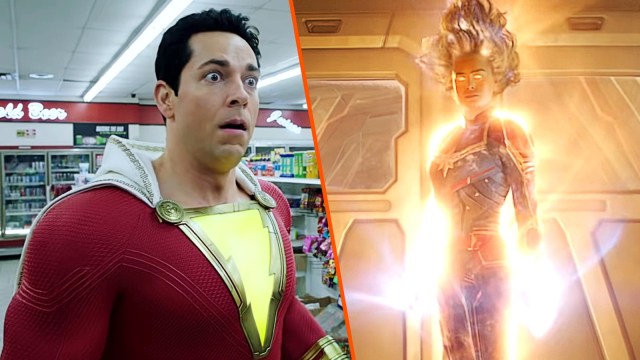 When it comes to DC and Marvel, the name Captain Marvel has two different meanings. With superheroes becoming increasingly mainstream these days, including being featured in hit movies such as DC’s 2018 film Shazam! and Marvel’s 2019 film Captain Marvel, it’s worth wondering what the origin is for some of these superhero names.

As Todd Faulkner explained on the knowledge website Quora, the character now known as Shazam was the original Captain Marvel. Upon his inception in 1939 by C.C. Beck and Bill Parker, however, the character wasn’t part of DC comics. Having first appeared in Whiz Comics #2 in 1940 by publisher Fawcett Comics, it wouldn’t be until years later that DC was able to secure the rights to the character.

For years, he was the one and only Captain Marvel. He was the most popular comic book character in the 1940’s and even outsold Superman. In fact, he is the first Captain Marvel to be put on film, with Republic Pictures making a serial about him. Well, you had best believe that the company now known as DC noticed this, and noticed how similar he was to Superman, so they filed a copyright infringement suit against Fawcett and that suit, along with some other economic reasons, caused Fawcett to cease publication of Captain Marvel and related characters called the Marvel Family. For all intents and purposes, Fawcett closed up shop and went home. In 1972, DC leased the right to use Captain Marvel from what remained of Fawcett and in 1991 outright purchased the characters.

After Fawcett stopped publishing Captain Marvel comics, but before DC reinvigorated the franchise by adopting the Billy Batson character as their own, the increasingly prominent Marvel Comics took the opportunity of the copyright lapsing for the “Captain Marvel” name to make a wise business decision. Marvel went ahead and created their own Captain Marvel, a Kree soldier, named Mar-vell, which ended up being a character who flourished throughout the 1970s. It is due to this business move that when DC eventually acquired the rights to Fawcett’s Captain Marvel character in 1972, they could no longer use that name. Hence, DC rebranded the hero as “Shazam,” which is also the magic word the young Billy Batson utters in order to transform into the muscular eponymous superhuman we saw portrayed by Zachary Levi in the 2018 movie adaptation.

Within Marvel comics, the moniker “Captain Marvel” has also changed hands amongst many different characters, including Carol Danvers, the person who took on the mantle for the titular Marvel Cinematic Universe film portrayed by Brie Larson.

If that weren’t enough, yet another character called Captain Marvel had a brief run in 1966, after Fawcett ceased publication but before Marvel acquired the Captain Marvel name, by the short-lived publisher M.F. Enterprises, with the character being an android who could “split his body into component parts”, the Quora post explained. Rather than shouting “Shazam!,” the robot Captain Marvel would yell “Split!” to allow the various parts of his body to independently separate, according to the Public Domain Super Heroes Wiki.