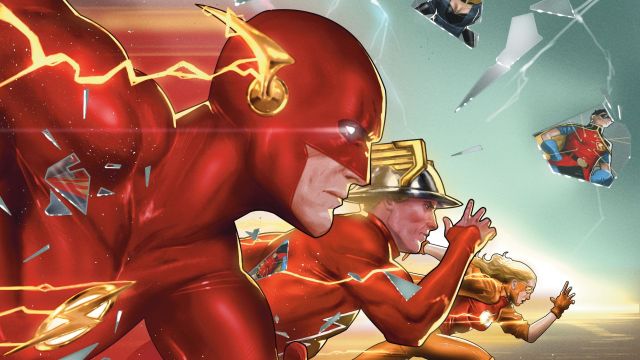 Marvel may have the likes of Quicksilver, Speed, and the Whizzer, but it’s fair to say that DC has cornered the market when it comes to speedster superheroes (not to mention speedster supervillains, too). Mostly thanks to the ever-growing mythos surrounding the Flash, the DC multiverse is full of characters who are, like a certain Man of Steel, faster than a speeding bullet.

But who are the absolute fastest heroes and villains in DC lore? With the rules changing with every subsequent reboot of the universe, it’s hard to create a definitive ranking of the speediest speedsters around, but we’ve examined the entire history of DC, from the debut of the original Flash in 1940 to today, to list the 10 fastest characters in DC comics.

With commiserations to those who didn’t quite make the cut, like Jesse Quick, Max Mercury, Johnny Quick, and Bart Allen, let’s get on with the race.

Jay Garrick might have been outrun by many a speedster that’s come after him over the decades, but he stills deserves a spot on this ranking thanks to his status as the OG Flash. Originally gaining super-speed after experimenting with heavy water vapors, Garrick was one of the leading heroes of the Golden Age, serving as one of the most recognizable members of the Justice Society of America.

Despite being one of the fastest characters in DC canon, Lightray is often overlooked by fans. One of the New Gods of New Genesis, he has a vast array of powers, including immortality, super-strength, and the ability to project and generate solar energy. Lightray’s most distinctive power, however, is his incredible speed, with the hero able to cross the vacuum of space almost at the speed of light.

With a cheery disposition and a pacifistic outlook, Lightray — who has served as a member of the Justice League and Justice League International over the years — certainly has the speed to go the distance but he would likely come in second to a more determined or ruthless opponent.

An opponent like Red Death for example. One of the most fearsome speedsters in DC lore, Red Death hails from Earth-52 and served as one of the Dark Knights, the league of evil Batman doppelgängers led by The Batman Who Laughs.

A twisted version of Bruce Wayne determined to wipe out the scourge of Gotham City once and for all, Red Death gained his speed after he managed to merge himself together with Barry Allen, destroying Allen’s body but stealing his connection to the Speed Force.

The only thing hampering Red Death’s abilities is the fact that he has Barry’s consciousness in his head, which frequently tries to escape or reassert control.

If you’re only familiar with Godspeed from The Flash TV show’s frankly underwhelming depiction of the character, know that his comics counterpart is a lot more imposing. Once Barry Allen’s CCPD colleague, August Heart went on a merciless rampage against the criminals of Central City when he first gained his powers.

Godspeed is so fast that he’s been known to beat Barry, with Allen only succeeding in taking him down initially with the help of Wallace West. In addition to his superior speed, Heart can also steal the speed from other speedsters and create clones of himself. He later reformed into an anti-hero before he was murdered by Reverse-Flash.

While the New Gods have Lightray, Darkseid and the forces of Apokolips have Black Racer. Originally a Vietnam War vet named Willie Walker, Black Racer was imbued with his dark powers by Darkseid and came to be viewed as an avatar of Death itself.

Using his cosmic skis, which grant him infinite super-speed, Black Racer is the grim reaper of the New Gods and hunts them down at the point of death in order to take them to Hadis, the underworld, as he did with Darkseid himself in Final Crisis. In addition to his fearsome speed and Death Touch, Black Racer can also possess another speedster, as he did Barry Allen on one occasion.

It’s said that you can’t outrun death, and that’s definitely true when it comes to Black Flash. A similar being to Black Racer, Black Flash is the grim reaper of the Speed Force and appears to speedsters at the point of their deaths to take them back with him into the Speed Force.

Unlike Black Racer, Black Flash is an elemental being and is an embodiment of the dark side of the Speed Force, which means that he can be considered even faster. Having said that, Barry Allen has also temporarily taken over as the Black Flash in the past. In The Flash TV series, an undead Zoom was punished for his misdeeds by being transformed into Black Flash.

The question of who is faster, the Flash or Superman, is one that DC fans have been asking for decades, with the race often teased in on-screen media to boot, most recently in 2017’s Justice League. When the pair have raced in the comics, generally the Flash has come out on top, but only after really pushing his limits.

This only refers to Kal-El’s speed when running, however. When flying, which is his preferred mode of transportation, Superman is vastly quicker, making him one of the speediest beings in the universe. While he doesn’t possess the connection to the Speed Force like most of the characters on this list, Supes’ solar-powered speed makes him more than fast enough.

While the second Reverse-Flash, Hunter Zolomon, is also a worthy opponent, it is Eobard Thawn who will always serve as the Flash’s ultimate nemesis. As powered by the Negative Speed Force, which either makes him an exact match for Barry in terms of speed or slightly faster, depending on the depiction, Thawne is one foe that the Crimson Comet can never escape.

For every way Thawne has ruined Barry’s life, however, he has ironically also forced him to become a better, faster hero, thereby creating his own rival and former idol. You might think that Thawne’s relentless hunger for power makes him unbeatable, but actually Barry’s heroism and determination to defeat him means he usually comes in second.

His name is Barry Allen and he is the Fastest Man Alive. Easily the most iconic incarnation of the Flash, Barry stands tall in the history of DC’s speedsters as the first human to have a connection to the Speed Force. As the TV show has depicted as well, Barry has only gotten faster over time as he has pushed himself past his limits and better understood his ties to the Speed Force.

In fact, the recent Rebirth era of the comics dropped the bombshell that Barry is actually the creator of the Speed Force, which was birthed into being when that lightning bolt hit him in his chemical lab, thereby giving him his powers. Powers which, of course, include a myriad other Speed Force benefits, including temporal and multidimensional travel.

Barry Allen may be the most famous incarnation of the Flash and the original user of the Speed Force, but DC lore dictates that he isn’t actually the fastest speedster in the universe. That honor goes to his former protege and sometime successor, Wally West.

While Barry might have created the Speed Force, Wally has a greater connection to it, able to mainline his speed directly from the source thereby making him even faster than this mentor. Not to mention granting him abilities that other speedsters lack, like kinetic energy absorption. It has even been unequivocally stated that he is the fastest being in the entire multiverse.

Despite recent comics, like Heroes in Crisis, giving him a hard time of it, Wally is unlikely to be outpaced as DC’s ultimate speedster anytime soon.