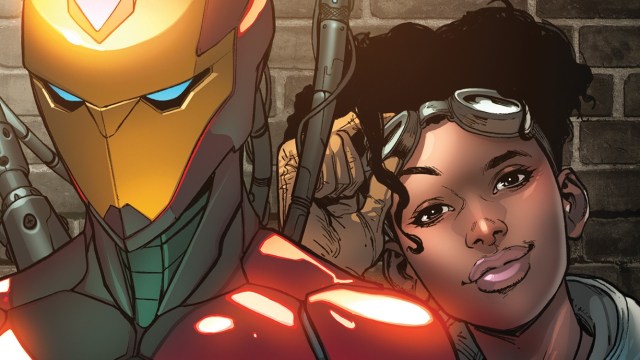 All of the Marvel feature films and television series slated for Phase Five were announced at San Diego Comic-Con over the weekend. Starting with Ant-Man and the Wasp: Quantumania, Marvel have revealed their schedule for the entirety of 2023. Among those Phase Five projects, Marvel unveiled Ironheart, a solo outing for Riri Williams, a gifted engineer, inventor, and certified child genius as well as Iron Man’s protégé. Filming for Ironheart is officially underway; the series will act as the sequel to Black Panther: Wakanda Forever — in which Riri is set to make her on-screen debut. It was also announced that 25-year-old Dominique Thorne — known for starring alongside Daniel Kaluuya, Lakeith Stanfield, and Jesse Plemons in Judas and the Black Messiah (2021) — will be portraying Riri Williams in the aforementioned Black Panther sequel and its follow-up series Ironheart.

After the tragic death of Robert Downey Jr.’s Tony Stark in Avengers: Endgame, Marvel fans have been holding out hope for a reprisal or a re-cast, especially with the endless possibilities presented by the ever-growing multiverse introduced in Spider-Man: No Way Home and Doctor Strange in the Multiverse of Madness. Although Riri Williams may not be the billionaire, playboy, philanthropist, and genius inventor that we know and love, she manages to reinvent Stark’s legacy without disrespecting the original and only Iron Man. Williams is cut from the same cloth as Tony Stark and it makes her the only worthy apprentice to continue the work he started. However, not all Marvel fans are well-informed when it comes to Riri Williams and her backstory, characteristics, and purpose.

Who is Riri Williams / Ironheart?

Let’s start at the beginning of Riri Williams’ extensive history as an MIT dropout turned full-fledged heroine. Riri Williams was born and raised in Chicago, Illinois. After the death of her father, Riri Williams Sr., Riri began living with her mother Ronnie, sister Sharon, and their step-father. When Riri was five years old, Ronnie noticed behavioral problems that made Riri’s education near-impossible. Subsequently, Ronnie consulted a child psychologist, who declared Riri a child genius after implementing several psychological tests. From then on, Riri was given emotional support and special aid in fostering her vast intellect, which later turned her into a recluse.

When she was ten years old, Riri met her only friend, Natalie Washington, after the latter caught her tinkering with some inventions in her garage. Afterward, Riri was granted a scholarship at MIT, but three years later, Riri’s family was involved in a drive-by shooting that killed Natalie and her step-father. That tragedy would act as Riri’s motivation to build her first Iron Man suit.

Riri successfully created her own prototype version of Stark’s iconic suit after reverse-engineering technology from the outdated Iron Man Armor Model 41. When campus security caught wind of her investment, Riri donned the suit and fled the scene. That last-minute escape led to Riri experimenting with her flying capabilities and therefore perfecting the suit’s flight functions while testing its limitations. Soon, Tony Stark heard about Riri’s accomplishments and chose to endorse her inventions and fund her desire to become a superhero.

During the second Civil War, Riri donned her suit and battled Captain Marvel alongside Iron Man. However, Stark fell into a coma post-war and prompted Riri to continue his legacy. Guided by an A.I. resembling Stark, Riri improved her initial designs to fashion a new and improved suit — eventually adopting the alias Ironheart. Having gained international acclaim, Ironheart was offered the resources in Stark’s old lab, another scholarship at MIT, and an invitation to join the ranks of the Champions – a small, self-made superhero team.

After officially becoming a member of the Champions, Riri — in attempt to save the Chitauri from genocide — recklessly opposed Thanos. The Mad Titan disintegrated her suit with ease and spared her life only to repay an old debt to the Champions. Reeling from defeat and a bruised ego, Riri worked tirelessly on a reiteration of her armor. After building her self-esteem from the ground up, Riri’s teammate Viv revealed romantic feelings toward her, but Riri’s ineptitude and poor social skills led to an unrequited love and awkwardness between her and Viv that discouraged Riri from engaging in Champion-related activities for a while.

Shortly thereafter, Riri made the decision to fly solo and accept the MIT offer. She worked on developing an A.I. for her upgraded armor, which she named the Neuro-Autonomous Technical Assistant & Laboratory Intelligence Entity (N.A.T.A.L.I.E.). Several missions and adventures later, Riri gained passage to Wakanda, where she met Shuri for the first time and aided her in dispelling an incoming threat. From that moment on, Shuri granted Riri full access to Wakandian technology and informed her that there would always be a place for her in Wakanda – should she ever want it. Eventually, Riri returned to Wakanda to help assemble an armada to protect its territory.

After the enactment of the Underage Superhuman Welfare Act, which outlawed teenager vigilantism, Riri was near-forced to retire her Ironheart mantra and instead chose to fly under the radar and continue operating as a vigilante. Riri continued to work with the Champions during this time, all of whom were being pursued by the Child Hero Reconnaissance and Disruption Law Enforcement (C.R.A.D.L.E.) after Ms. Marvel’s real name, Kamala Khan, became public knowledge. After taking down C.R.A.D.L.E., Riri and the Champions were free to continue their heroism without intervention or prosecution – and that’s the exact moment in time where Riri’s comic arc currently resides.

Whether or not the Ironheart series will adhere to Riri’s comic backstory or rewrite her biography is yet to be seen, but the chances are that Ironheart — just like every other Marvel series — will serve as the next chapter in the overarching MCU storyline rather than act as a stand-alone narrative. Either way, Riri Williams will hopefully lift the spirits of despondent Iron Man fans everywhere with her charisma, uniqueness, and faithful revival of Tony Stark’s presence, reputation, and legacy.

Dominique Thorne’s live-action adaptation of Riri Williams will allegedly make her MCU debut in Black Panther: Wakanda Forever and her solo series, Marvel’s Ironheart, is scheduled to premiere on Disney Plus during fall 2023.