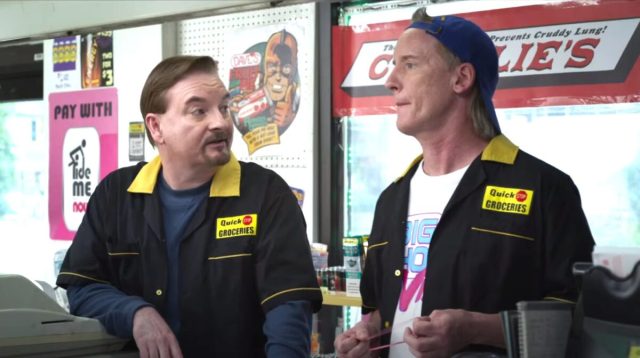 Allison Pearce has been in costume design for almost 10 years, cutting her teeth on Saturday Night Live, before transitioning into films with Chadwick Boseman thriller 21 Bridges. She followed that up with Adam Sandler’s Hustle, prior to handling the costume design for the critically acclaimed Aubrey Plaza film Black Bear.

Tasked with realizing Kevin Smith’s vision in Clerks III, Pearce was soon faced with an entirely new set of challenges, as Randall and Dante were brought back to life by Jeff Anderson and Brian O’Halloran. Allison recently took time out to talk to We Got This Covered about what made this project so appealing, as well as the responsibility which came with honoring these characters.

How and when did you first get approached to work on Clerks III?

I was approached to do Clerks III through one of the producers – Amy Jarvela, who I knew from a previous Owen Wilson film we worked on together. Coincidentally, her next project was Clerks III and she approached me, sent me the script, and asked whether I was interested in meeting Kevin. We clicked immediately and from there hit the ground running.

As a costume designer at the start of any project, where is your jumping-off point creatively?

Well I think this one is different from almost every other project I’ve done, because it was so research heavy. I read the script and knew right away that those aspects of the movie inside the convenience store, were all callbacks to the original Clerks. So I had to pour over the original and basically find film stills from the VHS footage.

Doing research on this level, involved deciphering grainy black and white footage to determine all kinds of detail, including what kind of sneakers Jason Mewes wore in the original film. I knew they happened to be an Asics Gel Saga and having worked on Saturday Night Live, treated this process more like research for a forthcoming sketch.

When I worked on SNL and we did parody, part of the art of parody is getting it exactly right, so it feels seamless for the audience. I think that was my main job on Clerks III, figuring out how to make those scenes in store perfect, so that no-one would question them.

Kevin Smith has obviously lived with these characters a long time. On a collaborative level, how much did his input influence your choices?

I think that Kevin is such a great collaborator and he really encouraged me to go for it specifically with Elias (Trevor Fehrman). He reminded me recently that the script said “Elias now wears a metal t-shirt” and that was the only thing scripted as far as his visual transformation goes. That was sort of like this tiny little jumping off point for me.

I remember after the first fitting with Trevor, Kevin called and gave me licence to really show some creativity and range with this character. At that moment I felt free to try lots of different things and to really explore what might work. Elias has over 20 costume changes in this movie, which is a lot for a Kevin Smith film. Randall and Dante mostly stick to t-shirts and Quick Stop smocks and hockey jerseys, which is a formula that Kevin wanted to follow. But Elias was different, that was a very different character.

With Jeff Anderson and the character Randall I think you hit double digits when it came to the changes across this movie. Did any of those have significance for the character or feed into the choices of the project itself?

So all the t-shirts, they’re all callbacks and Easter eggs from the View Askewniverse, which Kevin had specifically started working on at least a year before I came on board. He has two graphic designers that he works with, Nate Gonzalez and John Spreckelmeyer, and they had all these graphics ready to go. When I joined the project it was my job to find homes for them, including specific creations like Ranger Danger.

There were a whole bunch of comics that were translated into t-shirts and figuring out what colors made sense for Randall, what fit, what brand, you know there’s millions of options of t-shirts out there. Do we use heat presses or screen printing, there were all those different options and I think it was our goal to get every single t-shirt in the film – which I think we did, there were so many.

What is the significance of the constant costume changes for Elias and Blockchain Coltrane?

With those looks specifically, I needed a jumping off point for each of the costumes in each of those beats where we see Elias and Blockchain Coltrane together. I started to pull from musical pop culture, some references that would inspire me, the makeup artist and the hair stylist. They needed to be visual images which would allow the three of us to put our heads together, in order to create a look which would feel cohesive.

The Mad Max look and the aviator goth look with the goggles on his head, came from Blade Runner I think. That’s how we were referring to them – we would be like, well this is a Frank-N-Furter look, or this is a Crimson Peak look. There was also a kind of goth murder baby doll that he wears with this big Victorian bonnet. All of these looks really allowed us to visually riff.

His looks are kind of the joke in the scene, they’re very quick beats and they needed to read very fast, so there needed to be, in each look, a strong element that kind of made it iconic for audiences. I think that they were great influences for me, but amongst the strongest was The Addams Family.

I think also with those two characters Elias and Blockchain, it needed to feel like Elias was leading the pack in terms of his style that we see in each scene. Then Blockchain was kind of one step behind him throughout the whole character arc. So maybe he’s picking up Elias’ clothes from the day before off the ground and he’s wearing them the next day, or he’s like copying him in some way because he’s a sidekick.

To what extent do you think costume designers influence a film’s identity, above and beyond character?

As a costume designer I know I’ve done my job if the costume choices support the character and they make sense for them. I don’t know that I intended to steal the show with Elias but I think Trevor (Fehrman) really went for it with his acting and he loved all the accessories and the pieces that we gave him – he was really bringing it.

There’s even a scene I remember, where we had given him these long kind of chain-mail rings, which allowed him to rock out and do devil horns with his fingers. These accessories turned into essential props which helped bring his character to life on camera – it wasn’t just something he was wearing, it was part of his process in creating that person.

Having been in the industry over a decade working across film and television, what are the key things you weigh up before signing up?

I think that story is very important to me. When I read a script the story needs to make sense and also I need to be inspired by the it. I don’t want to read something that I’ve seen done 20 times before, that’s a little limiting for costumes because then there’s all these creative walls to breakdown, meaning you have to figure out how to re-tell that story. I think also environment is very important for me in the design process.

One of the things that drew me to Black Bear specifically was the environment and where that story takes place. You can draw on elements of, in that case, nature and the lake and the cabin where we shot the film.

In Clerks III the setting is the Quick Stop and there’s so many textures and colors and interesting things in the background, which made that whole space make sense with the costumes. I also think my job as a costume designer is often to be a problem solver, where I will read a script and it will ask me to try something completely new that has never been done anywhere else. Which leads me to wonder how I would do it, which in turn might inspire some ideas that I could try – that’s a really fun part of my job. It often involves coming up with ways to do new things and create solutions.

Oh, probably going hiking with my partner Ian and my dog Sydney, then probably jumping in a creek afterwards and then going out to dinner – pretty chilled out really.

Clerks III is now playing in theaters, before coming to digital on October 14, and you can check out our review of the movie here.