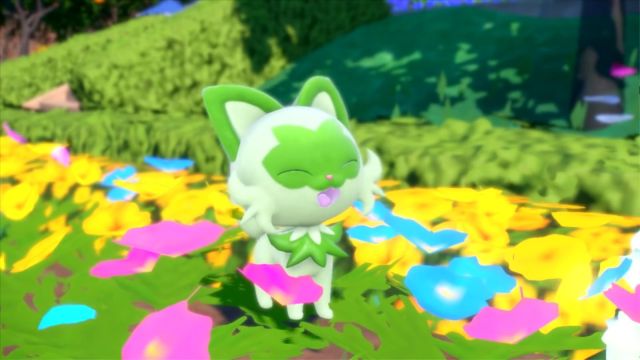 The spoilers just kept on leaking as fans who received their copies of Pokémon Scarlet and Violet early began sharing more information about the starter Pokémon. Another starter making the waves on social media is the grass-type Pokémon Sprigatito, as this creature’s evolution line has been revealed.

Images of Sprigatito’s evolution forms have leaked on social media, most predominately on Twitter and Instagram. They were not gameplay/overworld images. Instead, this Pokémon’s appearance was found in design assets for the game’s fictional posters or magazine covers. It has also been revealed that when Sprigatito evolves, it will become both a grass and dark-type Pokémon.

The grass type Pokémon evolves into Floragato, the grass cat Pokémon, and Meowscarada, the Magician Pokémon. Sprigatito’s evolution forms also have this creature transforming into a bipedal Pokémon as it’s able to stand on its two legs. Just like Fuecoco’s leaked evolutions, Floragato has some sort of name origins in the Spanish and Portuguese languages. Flor is Portuguese for ‘flower’. And ‘gato’ is Portuguese and Spanish for ‘cat.’

Fans had mixed reactions when they saw Sprigatito’s leaked evolution lines. On one hand, some were okay with it as it didn’t look that bad. However, some felt heartbreak as they were expecting something cute like Primarina or completely different.

What’s sad about these recent leaks is that fans are now feeling disheartened. They have certain expectations of how the starters should look when they evolve, only to be presented with something different. Then again, they were not supposed to know what their evolutions looked like as the game isn’t even out yet. Unfortunately, it is very unlikely that Game Freak would implement last-minute changes to these Pokémon’s appearance, especially since the game releases very soon.

Pokémon Scarlet and Violet come out on Nov. 18, 2022, on the Nintendo Switch.