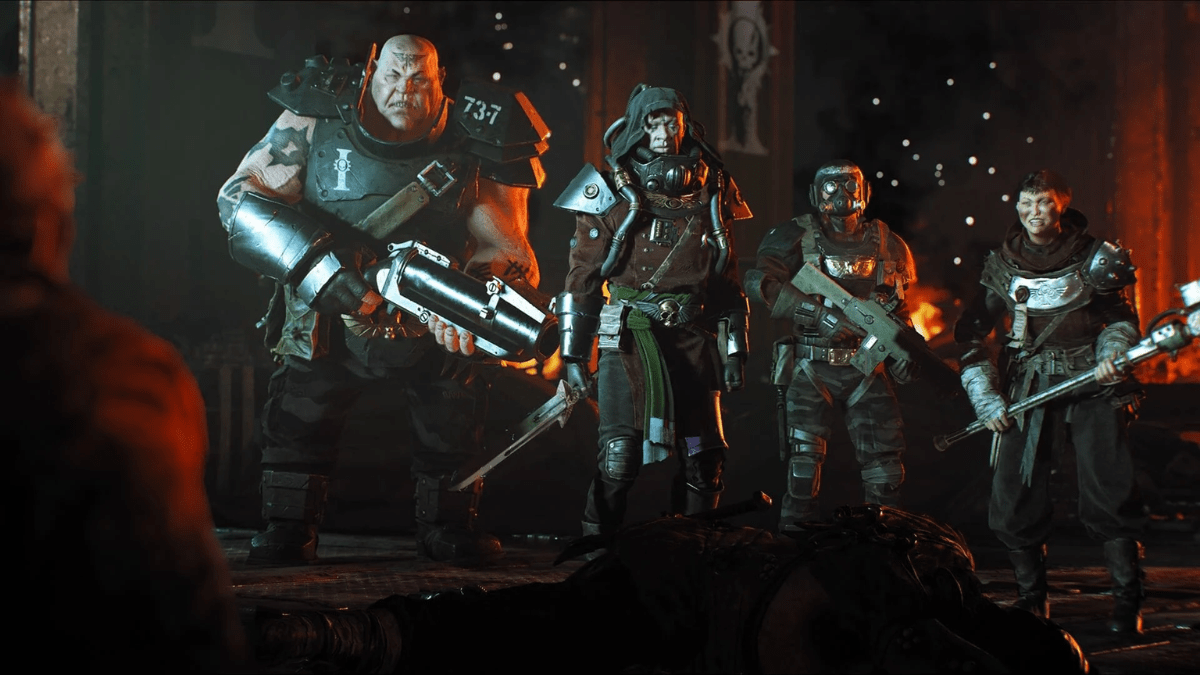 Warhammer’s been around for a long time. What started out as a table top war game has since become a massive franchise, spanning a variety of different forms of media. There are now books, video games, short films, and even a potential series adaptation landing on Amazon. It’s been almost 40 years since Warhammer 40K started, and the franchise has had plenty of room to grow and develop the story in all different directions. There are so many ideas that have come about within these 40 years that have been expanded upon by authors, fans, and even the creators themselves. But, specifically, we want to focus on the video games that have been made based on the Warhammer IP.

And there are plenty of video games too. Every game gives us a new glimpse into the world of 40K with different characters, factions, and settings. And going beyond the story elements, the creators have given us almost every genre of game too, be it first person shooter or a turn-based strategy game. With so many to choose from, it’s hard to choose the best, but we’ve done our best and narrowed it down to 10 games we think are worth a shot.

This third person hack ‘n’ slash gives players the opportunity to play as an Ultramarine, the closest thing to a “good guy” that you’ll find in the 40K universe. They’re also the poster boys for the franchise as a whole. You play as Titus who must fight off hordes of Orks and regain control of the planet Graia using the bolt gun, chainsword, and other cool Space Marine weapons that can be used in satisfyingly gory death animations.

It’s a solid single player campaign that gives the all powerful feeling of being a space marine slashing his way through an army of Orks and chaos forces. The game gets the feel of 40K just right and captures how those table top battles would feel if they were real time. It’s also a bonus for any fans of the ultramarine faction, but that’s not a requirement for enjoyment.

The main gameplay focuses on capturing bases across the map and mowing down your enemies. There are a multitude of factions to choose from including space marines, chaos space marines, orks, Aeldari and many others included in later expansions. There’s a solo storyline that can be played, but there’s the option of other game modes as well.

Although the game is nearly 20 years old, there’s no doubt that it still holds up today. It’s as brutal as it is addictive, as you build bases to upgrade your army to give them better weapons and conquer more of the map. There’s currently two sequels to Dawn of War as well, and both are worth trying out.

One of the newest 40K titles to be released, this 4 player co-op has players working together to take down hordes of enemies. There are 4 classes to choose from, the Psyker, Veteran, Ogryn and Zealot. Each plays differently with their own strengths and weaknesses, so it’s up to the player to decide their class and playstyle. Each squad also has one of each class to balance each other out.

The game is the 40K equivalent to its Warhammer fantasy sister title, Vermintide. It plays the same and features similar classes and horde combat. If you’ve played and enjoyed Vermintide, then you’ll definitely be wanting to try this one.

Whilst the original Space Hulk was an RTS, and a great one at that, the newest video game adaptation of the hit tabletop game gives us a first person shooter take. You play as a space marine of the Dark Angels in a squad tasked with clearing out a derelict spaceship overrun with Genestealers. The other squad members can either be AI companions, or your friends can join you online and you can work together to take down hordes of Genestealers.

The game is great fun, especially when played with friends and in many ways improves on the features of the tabletop game. There are other videogame adaptations of the Space Hulk table top that play closer to the original, so if an FPS doesn’t sound like your cup of tea, then check out Space Hulk 1993.

Battlefleet Gothic: Armada 2 features epic battles between giant spaceships, there’s not much more you could ask for from a game. The real time strategy games features 12 factions to choose from, including The Imperial Navy, Necrons, and Aeldari. There are also three campaigns that center around the imperium, the Necrons and the Tyranids.

To put it simply, you get to control a giant ship and shoot, ram, and blow up other big ships. The detail and design of each ship is great and they’re cool to watch as they go to battle. The scale of Warhammer really shows in this game, too, as other ships and fortresses show up that dwarf your own.

This fast paced first person shooter allows players to explore the sprawling hive world known as Necromunda. Play as a mercenary hired to hunt down gangers and mutants in a sea of crime. Oh, and you also have a dog sidekick who will help viciously tear apart your enemies.

The game’s single player campaign promises explosive, gory, over the top action; and it delivers. Players must use their arsenal of weapons, including grenade launchers, power-knives, and grav guns, to hunt down targets across the ultra violent settings.

One of the few Warhammer games where you get to play an ork, and much like the Orks themselves, the gameplay is hectic, fast-paced madness. Players take control of an Ork “flyboy” (a pilot) and lead aerial assaults on bases Ace Combat style. The game is just plain fun, it requires a lot less thinking than other Warhammer titles, which usually focus on strategy and a higher level of thinking. This game lets you switch off your brain and just watch things blow up as you fly around cool maps.

If you’re an Ork player in the Warhammer tabletop games, then this game is perfect. It’s also got multiplayer and a single player campaign. The game is a more lighthearted addition to the 40K universe, so it’s perfect for players who want to play something set in the grimdark universe of 40K without playing something so… you know, grim and dark.

Another great turn based strategy game, although this time you’re in control of the Adeptus Mechanicus, the most technologically advanced army in the 40K universe. You must customize your team and manage resources as you lead an expedition into the heart of Necron territory.

There’s a lot of choice when it comes to customizing your team, on top of this players must choose the units they take and strategically pick which missions they wish to embark on. Making these decisions can completely change the game, which makes it perfect for a replay to see what was missed, or how you could have played differently.

Another Ork game, however, this one differs from the typical aesthetic style of Warhammer 40K. It has a 2D cartoonish style and humor is even worked into the story, which, if you know the 40K universe, is quite an achievement. Although this difference in artistic style actually works, because the game focuses on Orks, who usually are a lot less serious compared to the rest of the factions we see.

In terms of gameplay, it’s a run and gun platformer with options to choose between different classes and different weapons to launch your assault on your enemies. The best part of all, though, is that there’s an option for up to four players to join in on the carnage and chaos. This makes playing the game so much more fun and hearkens back to the good old days of couch co-op.

Going back over 25 years we have this gem, Epic 40K features battles between dozens of armies and is based on the tabletop game of the same name. You’ll play as either the Imperium or the Orks and command some cool looking tanks, troops and titans in grid based combat. This was one of Games Workshops earlier attempts at developing the Warhammer IP into a video game, and the team behind the game did a great job. Few games had combat on this scale in the Warhammer universe before Epic 40K, although it’s common to see in games today.

The game looks a little dated but the 16 bit style has more charm if anything. It’s a classic game and still perfectly playable today. If you are interested in playing Epic 40K, you’ll find it on GOG.com.

Of course, the games in this list are just a few of the many Warhammer 40K games out there. Warhammer has been seeing a lot of mainstream success as of late, and a lot of it is owed to easily accessible forms of media, such as video games drawing in new fans. With more on the way in the near future, too, it’s exciting to see what Games Workshop will be doing next.

Whether you’re a die hard fan of the Warhammer 40K universe, or you’re just dipping your toe into the grimdark waters, these games are all worth a try. Even if you’re not a fan of Warhammer altogether, a lot of these titles don’t require much background knowledge. All of these games have clearly been made with a passion for the franchise and they all stick to the lore, but they also work as standalone games.

Most of these titles are available on Steam if you want to play some for yourself.