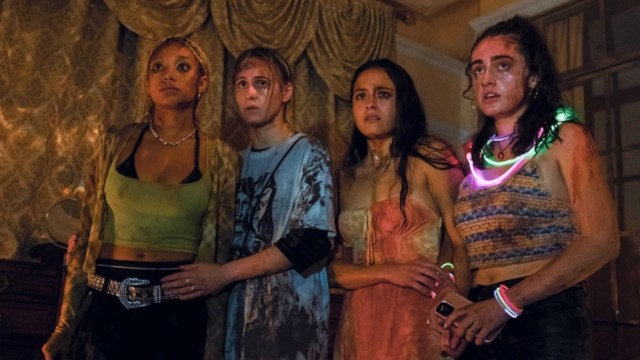 A24’s Bodies Bodies Bodies is currently sizzling up the summer blockbuster box-office, and in a year with a plethora of memorable horror projects, the enticing who-dun-it slasher is proving itself to be a worthy contender. The black comedy/horror has received plenty of rave reviews already, and has successfully marked the first English feature film under Dutch director Halina Reijn’s belt. And the main reason that the film has accumulated strong praise is the jaw-dropping conclusion that had fans shaking their heads and breathing a sigh of relief at the same time.

In Bodies Bodies Bodies, a young group of friends are gathering together at a friend’s family’s mansion during a powerful hurricane. The group consists of new couple Sophie and Bee, drug-dependent David, extremely-naive Emma, hawk-eyed Jordan, fast-talking Alice, and Alice’s out-of-place boyfriend Greg. While Sophie and David are revealed to be best friends, many friends within the group appear to have personal issues with each other — which eventually unfold throughout the course of the terrifying night. Towards the middle of the night, the friends decide to play a murder-style game called “Bodies Bodies Bodies” — a parlor game where one unidentified player is selected as the killer and goes around killing everyone else in a specific order.

And while the gestalt of Bodies Bodies Bodies might appear to be a typical slasher — or a deadly game of Clue — the actual explanation behind the film’s ending conveys a much deeper message of loyalty, friendship, relationships, and overall betrayal.

During the “Bodies Bodies Bodies” game, David is suddenly discovered with his throat slashed, prompting the rest of the friends to believe that there is a killer amongst them. They immediately assume the killer is Alice’s boyfriend Greg, seeing as their relationship was extremely short-lived and Alice was clueless in regards to personal information about Greg — plus, Greg had departed the game earlier to head upstairs to bed, making him a worthy suspect.

Eventually, Bee kills Greg in self-defense, which inadvertently makes her another suspect. The remaining friends begin to turn on each other, with each pointing out hardened flaws and revealing deep, dark secrets that were kept hidden up until then — including Sophie texting Jordan earlier in the night to meet up and have sex, which Bee was unaware of. Sophie, Bee, Jordan, and Alice eventually end up in a brawl while fighting over David’s father’s gun, and Alice ends up getting shot and killed accidentally. Later, Jordan and Bee cat-fight all the way up the staircase and Jordan is tipped over the bannister at the top of the landing, resulting in her smashing through a glass table and bleeding out shortly after.

In the film’s closing moments, Sophie and Bee, the two remaining survivors of the night, discover David’s phone, which reveals that he made a TikTok earlier in the night of him trying to open a bottle of champagne with his father’s sharp sword, with a catchy viral tune playing in the background. While trying to open the bottle, David accidentally slices his own throat and bleeds out — which proves that there was never actually any killer, and that wrongful allegations were the reason behind everyone else dying. Simply, the death of David was merely just an accident, and the long-standing resentment between friends is what led to the overall downfall of the night.

In the end, Sophie and Bee encounter Max, a friend that was supposed to show up earlier in the night. Sophie and Bee immediately realize that David’s death was an accident, and that all of their friends are essentially dead because of the group’s toxicity, drug problems, and failure to contain the dysfunction. And while plenty of comedic relief is sprinkled throughout the film, its perfectly-timed jump scares and unexpected twist adds a special element to the modern horror genre.