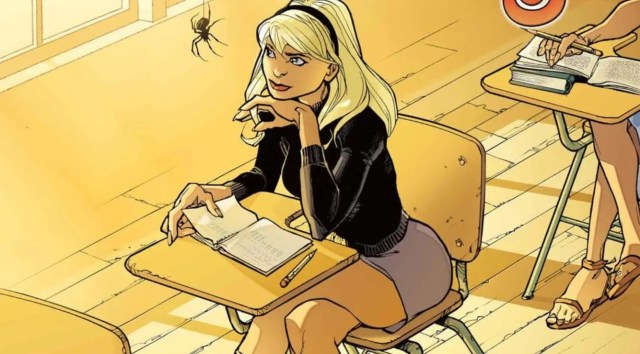 Spider-Man: No Way Home gave the MCU quite the revamp. Since the movie ended with no one remembering that Peter Parker is Spider-Man or remembering Peter Parker at all, Spidey’s story has a fresh start. What could that mean for the MCU? Peter’s had quite a bit of love interests in the comics, so it’s only fair that MJ has some competition. The top choice for the next Spidey character to enter the MCU is Gwen Stacy.

Played by Emma Stone, audiences first met Gwen when she was the love of Peter’s life in The Amazing Spider-Man starring Andrew Garfield. She was characterized as smart, independent, and authentic. She challenged Peter often, and, in the comics, she definitely gave Mary Jane a run for her money as a love interest. While Stone is the reigning queen of the role, there’s a high chance that Gwen could be recast for this new era of Spider-Man.

Sabrina Carpenter, probably better known for her pop music persona now, projected to fame when she started alongside Rowan Blanchard in Disney’s Girl Meets World. Since then, she’s starred in many films that take place in high school, such as Work It, Adventures in Babysitting, and Tall Girl. If the MCU wants to cover Peter’s freshman year of college, Carpenter could easily fit into his new world as someone who could be at his level and challenge him at every step.

Lana Condor isn’t blonde, but she already fits the look of Gwen Stacy. Many of the outfits in the To All the Boys franchise already had a “Stacy” look to them. She pulled off the short skirt, high boots, and headband look as well, so Condor already has the appearance of Gwen Stacy down. Her previous appearances in productions like Boo B*tch! and Moonshot show women who are strong, not afraid to be ridiculous, and sweet at heart. Condor is already Gwen Stacy, she just needs the call from Kevin Feige.

Elle Fanning’s performance on The Great is enough to show audiences why she should be the next Gwen Stacy. Like Catherine, Fanning is able to balance drama and comedy all while making everyone believe she’s truly a modern woman in 1700s Russia. For a woman who is surrounded by superheroes, we need someone who can interact with the craziness around her like it’s normal. Elle Fanning’s got the acting chops just for it.

As Monse in On My Block, Sierra Capri was able to challenge her costars and make her the voice of reason amongst the friends. With Aunt May out of the picture for Peter, he needs someone else who could be that voice of reason. Capri doesn’t have an extensive acting career, but that hasn’t stopped Marvel from casting anyone before. This role as Gwen Stacy could propel her career and give us a new female lead that’s exciting for Marvel fans.

Auli’i Cravalho’s voice might sound the most familiar as Moana, but the 21-year-old actress is branching out into live-action roles. Most recently as AJ Campos in Crush, Cravalho gave a performance that was mysterious and slowly transitioned to heartwarming, making her the perfect love interest. With an introduction to the MCU, Gwen will most likely come across as mysterious and guarded and it is up to Peter to get her to open up. Cravalho’s done this before, so this role would be nothing new to her.

As Sabrina, Kiernan Shipka already had the Gwen Stacy look, headband and all. The only difference was that she had magical powers and a connection to Hell. Fortunately, Shipka doesn’t have the same powers. With The Chilling Adventures of Sabrina, Shipka gave audiences a woman who was strong but who also could use her sensitive side to be powerful. As Gwen Stacy, she would look like she was ripped straight from the comics and be the perfect counterpart to Tom Holland’s Peter.

As the oldest person on this list, Kiersey Clemons has already portrayed Iris West, the love interest of The Flash, so she’s no stranger to this kind of role. Despite the long slow-motion scene in Zack Snyder’s Justice League, we haven’t been able to see Clemons as Iris West for a while. She is slated to return for The Flash, but it wouldn’t be the first time someone made the shift from DC to Marvel. At 28 years old, Clemons might not fit the mold of a college freshman, but she would fit as an upperclassman who walks Peter through his first few weeks in college.

Chloe Grace Moretz has been both a love interest and a superhero before. She started off her career as a child actress and eventually took on leading lady roles. If Marvel was looking to cast someone who would evolve into Spider-Gwen later in the franchise, Moretz could do it. With all the skills and stunts she learned being in Kick-Ass, the work needed to be in the Marvel Cinematic Universe wouldn’t be new to her.

Lovie Simone made a name for herself on OWN’s Greenleaf playing the rebellious daughter of a pastor, but she is much more than that. In Selah and the Spades, Simon commanded the film as the unofficial leader of a boarding school. She showed poise, strength and grace as Selah. Perhaps as a rival to Peter in his new college life, Simone could provide a Gwen Stacy like we have yet to see and give Peter more challenge than he bargained for.

Abigail Breslin has been in front of the camera for almost all of her life. In that time, she’s shown a breadth of characters that fit into any mold. In Zombieland, she played Little Rock, a headstrong young woman who would do anything to protect her and her sister Wichita from the zombie invasion. After reprising the role in the 2019 sequel, Breslin has found herself continuing to do action/horror films like Slayers, so the MCU action is easy for her. Perhaps she could ask her Zombieland costar, Emma Stone, for some pointers on Gwen Stacy herself.