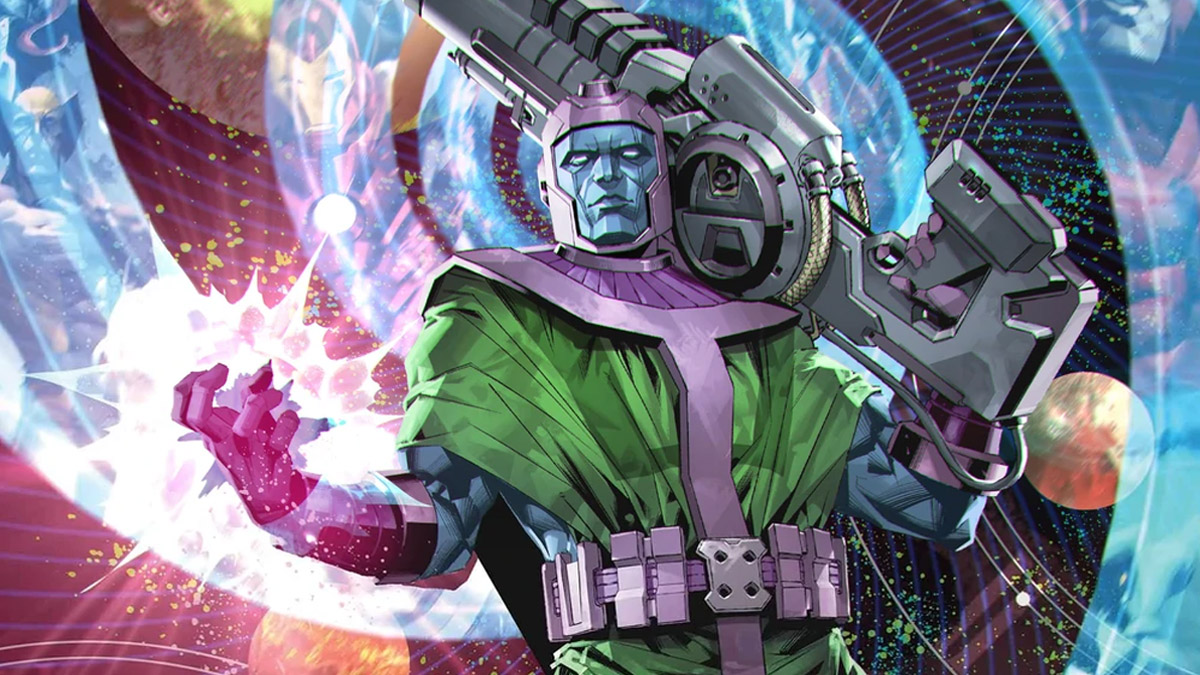 Superhero movie fans will see a lot more of Kang the Conqueror over the next few years, with the top-tier Marvel supervillain set to take the place of Thanos as the new main villain of a Marvel Cinematic Universe.

While Kang is set to make his feature debut early in 2023 in Ant-Man and the Wasp in Quantumania, Marvel devotees have already met him in the closing chapter of the Disney Plus series Loki. Met him, or we should say, met one of him. There isn’t just one Kang, and the time-troubling multi-variant villain is set to leave heads scratched and heroes in grave peril in the MCU as he has done in the pages of Marvel Comics since he first met the Fantastic Four in 1963.

Kang hails from the 31st century, where he inherited an impressive intellect from ancestors Nathanial Richards (father of Mr. Fantastic) and possibly Victor von Doom (yet to debut in the MCU). Discovering Doom’s technology in the far future, Richards travels through time, establishing versions of himself that variously helped and sabotaged his intricately laid plans as divergent forms spread through the multiverse.

Kang’s story is a warning about the dangers of time travel. The versions of Kang that have established themselves throughout human history have varied in name, villainy, and appetite for conquering. As hinted at in Loki, they are often not fans of each other, although they have been known to cooperate and pose a multi-Kang threat to the multiverse.

We are yet to see how the MCU’s Kang has affected time and manifested himself throughout Marvel continuity. It’s quite probable that we’ve already seen his handiwork without realizing it. The twists and revelations are set to come thick and fast, but in the meantime, here’s what we know about his established comic personas, many of whom are likely to appear in the MCU during the saga’s fifth and sixth phases.

The Fantastic Four first encountered Kang in this ancient disguise. Having traveled to Egypt aboard in his Sphinx-like timeship, Richards established himself as a Pharaoh, planning to install En Sabah Nur, who would soon become known and feared as the powerful mutant Apocalypse, as his successor. One giveaway to his future origins was the deadly Ultra-Diode ray gun he carried. Good thing the time-displaced Fantastic Four were there to stop his plan. As he hadn’t established his master persona as Kang at the time, the Fantastic Four played a crucial role in Richards assuming a more dangerous persona.

Timely by name, timely by nature. A quiet vacation for a variant of Kang as he carved out a life as Mayor Victor Timely in a small Wisconsin town in 1901. During his stay, he helped Phineas Horton develop the ideas that would manifest as the android Human Torch during World War II. This may seem like a benevolent version of Kang, but he carried this persona through multiple generations, and the robotic seeds and technological clues he laid in the 20th century were later seized on by his alternative future self with dramatic effect.

There have been several Scarlet Centurions, but the most notable was the persona Kang assumed when he traveled through the 20th century and finally met his predecessor and inspiration, Doctor Doom, whose impressive armor inspired Richards to take this persona. Things subsequently became complex for the Centurion. In mainstream continuity, this persona was a gateway to becoming the more familiar Kang, although his son Marcus took up the mantle, inevitably leading to a conflict between the two. In a parallel reality, a variant of the Scarlet Centurion who never abandoned his red persona managed to defeat the Avengers and take over Earth-712.

Shortly after meeting the Fantastic Four as Rama Tut, a more familiar version of Kang the Conqueror arrived in the 20th century to challenge the Avengers. This is the most familiar incarnation, rocking the purple and green futuristic battle armor with a fetching blue mask. Kang almost defeated the Avengers, setting a pattern of coming close but never quite beating his sworn enemies.

A little seen version of Kang who, despite wearing the familiar fall colors of his Prime counterpart, also possessed the ability to change size. The mutant superteam Excalibur briefly witnessed Keng fighting their alternatives from a parallel reality in Excalibur #49.

Iron Lad was a tragic lesson in destiny. This young Kang variant stole his future other selves’ technology to build a suit and become a hero based on Iron Man. He intended to create his own Young Avengers and defeat his other self or selves to avoid becoming Kang. Fate had different plans, and Iron Lad was forced to ensure his destiny as Kang the Conqueror to save reality.

A recent variant, Mr. Gryphon split from Kang and was trapped by a chrono-anomaly in the 21st century. Kang set about creating a dynasty, assuming the persona of a businessman and assembling supervillains to combat all opposition. In All-New, All-Different Avengers #6, Thor used Mjolnir’s future and past powers to dispatch this short-lived variant into the timestream.

Kang isn’t just content with splitting himself into combative variants; he’s also found his powers and abilities merged with others over the years. Other forms of Kang include an amalgam with Kamala Khan called Kamala Kang, and the future state of Iron Lad called Doom the Annihilating Conqueror, where Kang merged with Doctor Doom and Annihilius.

Chronus Tut was a fusion of Kang and The Time Trapper that clearly held a flame for the good old days in Ancient Egypt. Then there was the hugely powerful Time-Eater who emerged when the Conqueror killed Galactus and absorbed the Power Cosmic.

This is where it all started, in Kang’s original time. From here, Kang employed what he thought was the technology of his distant ancestors to travel thousands of years into the past and rise to power as Rama Tut in Ancient Egypt. This choice would set him on a collision course with the Fantastic Four, the Avengers, and set his destiny as Kang the Conqueror.

Fleeing the intervention of the Fantastic Four in Ancient Egypt, Richards attempted to return to his native time of the 31st century. Accidentally overshooting and arriving in the distant future, he quickly realized his advantage on a war-ravaged Earth where technology had been abandoned. Summing up his villainous cowardice, he became Kang the Conqueror against minimal resistance. Kang assumed control of the ruined world before leaving it to die to take his new thirst for power into the timeline.

All of time — Council of Kangs

Kang’s time-crunching quest against reality created problems and opportunities. Every new Kang variant is a potential enemy or ally to Kang Prime. He’s used this to his or their advantage by bringing together a vast council of his alternate selves. It’s easy to see these as a cooperative form of the Kang variants He Who Remains warns Loki and Sylvie about during the eruption of the timelines in Loki. In the comics, The Council of Kangs led by Prime Kang was tricked into ridding the Multiverse of divergent Kangs by their peaceable future form Immortus so he could guarantee his existence as Kang’s final form.

Whatever you do, don’t confuse them with The Council of Cross-Time Kangs, who first appeared in Avengers #292. That collective of humans and aliens assumed the mantle of Kang the Conqueror after defeating Prime Kang across multiple realities. If you’re going to steal one persona, make it Kang’s.

Out of time — Immortus

This variant inspired the Kang we met in Loki and is reasoned to be the most powerful form of the Conqueror. Immortus was the destined final form of Kang and ruler of Limbo. Fate was changed when the powerful Time Keepers accidentally separated this form from the Kang timeline. Despite the ominous name, this future version of Kang appears to have lost most of his conquering ways and adopted a more peaceful existence, despite being the most potent and knowledgeable version. Of course, you can never really trust a Kang.

A younger equivalent who may or may not go by the name Kid Immortus has appeared in other timelines, too, also seeming to possess a far friendlier attitude than other variants.

End of time — He Who Remains

The multiverse arrived with a confusing bang in the season finale of Loki. Inspired by Immortus, the personable persona we saw in episode six “For All Time. Always” was looking for a way out of his loneliness at the Citadel at the End of Time. This variant stated the consequence of his death and an unmanaged timeline would be nothing less than a multiversal war conducted by his many other variants. Understandably, he’d already seen the MCU’s Phases Five and Six.