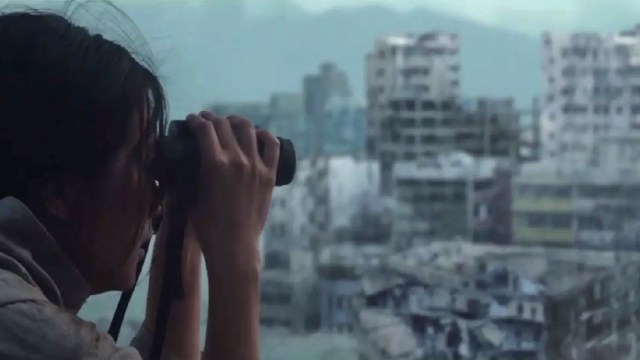 The majority of post-apocalyptic tales that manage to find a major audience tend to be star-studded thrillers, effects-heavy blockbusters, or high concept stories that promise to put a brand new spin on a well-worn formula. Deviating from that template, Joshua Wong’s The Calm Beyond looked inward to focus on a solitary character coming to grips with the end of the world.

Kara Wang’s Asha lives an isolated existence in a ruined apartment building that’s still standing in the aftermath of a tsunami that decimated Hong Kong, leaving her adrift and alone on a concrete island. Scraping by on a day-to-day basis, things take a most unexpected turn when she stumbles upon a child floating through the ruins, and the introduction of another human being has a far-reaching impact on every element of her existence.

Initially released in 2020, it may have taken a while for The Calm Beyond to gain traction among the general public, but it’s finally managed to sink its unique hooks into the HBO Max customer base. As per FlixPatrol, the atmospheric and relentlessly emotional tale has become one of the platform’s most-watched features this week after drifting onto the Top 10 in a stellar 20 countries.

A parable on wistful regret and long-lasting trauma set firmly within the parameters of a nightmarishly inescapable future, the visual effects are virtually seamless without becoming a focal point, with Wong and his team using the hauntingly empty and crumbling facade of Hong Kong to enhance The Calm Beyond, instead of overpowering it.