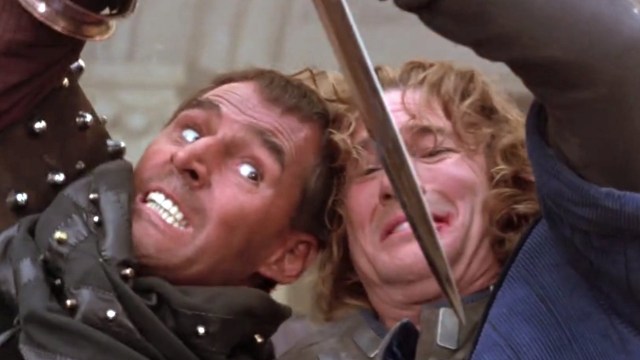 1995 was a huge year for medieval epics for Hollywood, even if Mel Gibson’s Braveheart ended up stealing almost all of the plaudits, box office success, and awards season recognition. Liam Neeson’s Rob Roy didn’t deserve to fly under the radar, but First Knight definitely did.

There was plenty of potential attached to the project, with Jerry Zucker helming his first feature since Best Picture nominee Ghost, as well as Oscar-nominated writer William Nicholson penning the screenplay, not to mention the tantalizing prospect of watching Sean Connery ham it up as a more villainous King Arthur than audiences had become accustomed so seeing.

Unfortunately, First Knight fell into the exact same trap as spiritual predecessor Robin Hood: Prince of Thieves by woefully miscasting its lead role with a handsome square-jawed American, with the notable caveat that Richard Gere’s Lancelot didn’t taste anything near the same levels of success of Kevin Costner’s questionably-accented outlaw.

In the end, mediocre reviews didn’t matter when the historical adventure ended up netting $127 million at the box office, and it’s even been experiencing a mini resurgence on Netflix for good measure. As per FlixPatrol, First Knight has crashed the Top 10 in five different countries, and it’s been sitting there all week as subscribers get their fix of swordplay and romance.

It’s hardly the genre’s finest example, and ditching the more mystical aspects of the established Arthurian lore robs the proceedings of fantastical flights of fancy, but if you’re looking for an undemanding way to spend 134 minutes that’ll scratch your itch for olden times, then you could definitely do a great deal worse.