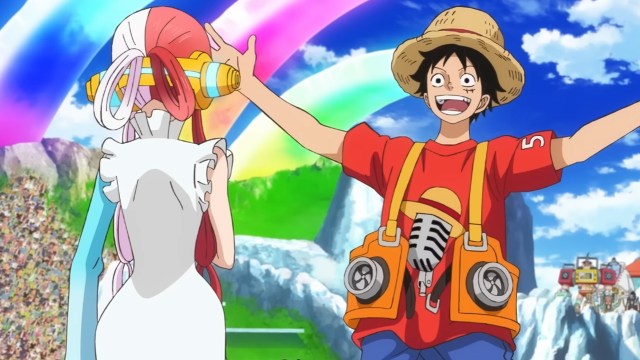 One Piece is one of the longest-running and most popular anime series of all time. The show to date has aired over 700 episodes and continues to be on the air to this day.

Luffy, Zoro, Nami and the gang are no strangers to the big screen, either. Since the series began in 1999, there have been 14 feature films starring its characters. These films involve separate stories to the series but take place between its events.

In this article, we’ll be showcasing the correct viewing order of these films for your next One Piece binge-fest.

In what order do I watch the One Piece movies?

The first time One Piece was bought to the big screen was in 2000 with the film One Piece: The Movie. In this adventure, the crew explored the legend of the Great Gold Pirate Woonan years after his disappearance after being robbed by a crew led by Captain El Drago, who is in search of Woonan’s treasure.

The second film in the franchise, Clockwork Island Adventure, launched a year later in 2001. The crew are robbed once again and tasked with taking on a rival crew on Clockwork Island to get their belongings back.

Chopper’s Kingdom on the Island of Strange Animals (2002)

This film, as the name suggests, is based upon the newest member of the Straw Hat crew, Chopper. After the crew’s ship is thrown by a geyser, Chopper is separated from the crew and winds up on an island inhabited by strange creatures, and thanks to perfect timing they believe he is their king.

Desperate for money once again, in this fourth One Piece film after attempting to finesse information from their host, the Straw Hat crew wind up in an impromptu competition facing off against many other pirate crews.

You can’t have a One Piece film revolving around swords without Zoro taking center stage—and that’s exactly what happens in this film. If Zoro is your favorite member of the Straw Hat, crew then this film is the one for you.

Baron Omatsuri and the Secret Island (2005)

After accepting an invitation to an island resort, the Straw Hat crew is challenged with taking part in the “Trials of Hell”. What starts off as a simple task quickly evolves into much more during this film.

After locating a new island, Mecha island, the crew helps out a fisherman in locating its treasures, however, it turns out there are more sinister intentions at play.

The Desert Princess and the Pirates: Adventures in Alabasta (2007)

The Straw Hat crew travels to Alabasta ,where the country’s hero, Sir Crocodile, has used his criminal ties to the Baroque Works organization to seize the thrown and country treasures for himself. This film is a retelling of the Alabasta Arc from the anime series.

Episode of Chopper Plus: Bloom in the Winter, Miracle Sakura (2008)

If you’re a manga reader, then the story of this film will be familiar as it is a close retelling of the Drum Island storyline. This story focuses on Chopper and features some other fan-favorite characters in its theatrical retelling.

This film was created for the tenth anniversary of the series and is the first time that Brook makes an appearance alongside the Straw Hat crew. The crew return to East Blue to deal with the threat of the fabled devil fruit user Golden Lion Shiki upon his flying ship.

In classic Luffy style, the crew is launched into a surprise adventure after searching for Luffy’s lost hat. There isn’t much else to say about this one. The film is the first and only entry in the franchise to be released in a 3D CGI style.

This film is set after the series had its two-year time skip and revolves around an ex-admiral of the marines, Zephyr, and his plan to flood the world with lava using the Dyna Stones. This film has plenty of other impressive weaponry and twists along the way.

Gold is a follow-up to the TV special, One Piece: Heart of Gold and showcases the Straw Hat crew arriving at the Gran Tesoro entertainment city to be greeted with special privileges thanks to their notoriety. With the crew’s history of financial problems, it’s pretty clear how heading to a gambling city may cause problems.

The most recent addition to the One Piece film series, Stampede launched on August 9, 2019, and commemorates the anime’s 20th anniversary. The film takes place during the Pirates Festival where crews from all over the world have come together to hunt for the long-lost treasure of Gold Roger.

The latest One Piece movie to arrive both internationally and in the United States is One Piece Film Red. In this film, we meet Uta who is a pop star known for her angelic voice that is spoken of as being “otherworldly”. Previously hiding her identity, Uta is now ready to reveal herself, but as you’d expect this isn’t the best decision for her or the world at large.