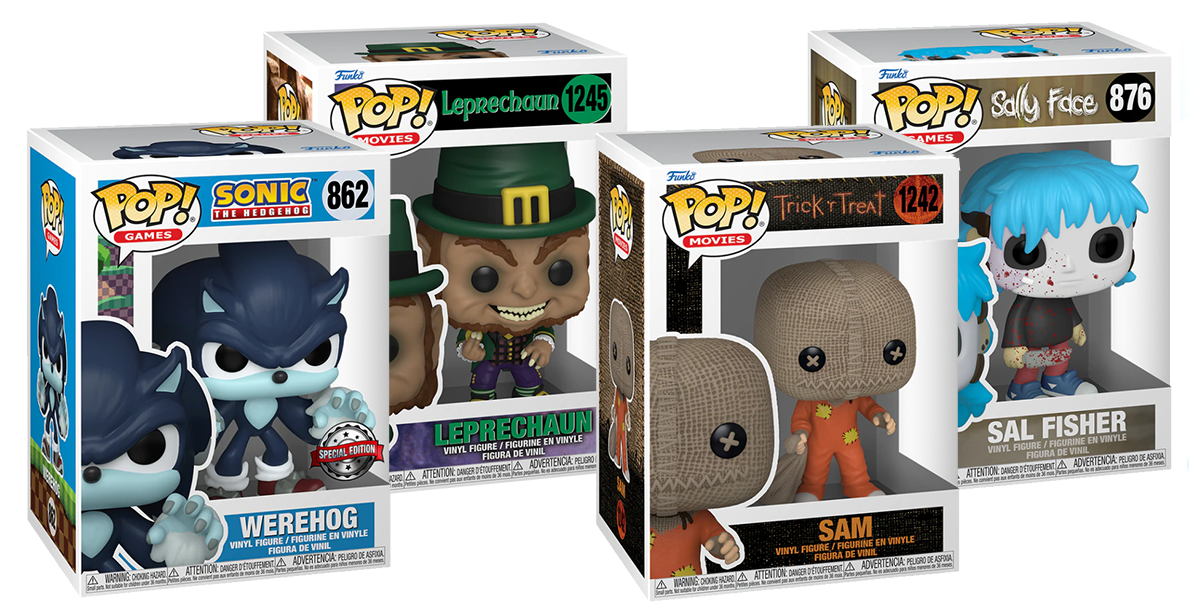 If there are two inescapable truths, it’s time and Funko Pops! That’s particularly true when Halloween’s creeping up on us.

It might feel a little late, but Funkoween 2022 is Funko’s helpful way of telling us that we’re halfway to All Hallow’s Eve. That may be a scary fact for some of us, but for fans of the pop culture collectibles, it’s one of the year’s highlights ⏤ a multi-day event revealing the freshest and scariest new Funko Pops!

This is Funko’s third Funkoween event. While it has a lower profile than 2021’s, running three days compared to last year’s five, it’s bound to be just as popular with collectors.

Previous Funkoweens have brought us exclusive waves from movies like The Craft, Zombieland, and Killer Klowns from Outer Space. In 2022, the event revealed classic Universal Horror monsters and a variant Stephen King Pop! holding a red balloon. Who doesn’t want that staring down at them from a bookshelf? In 2021, the event brought us a wave of adorably mean Disney villains and a memorable Jaws Movie Moment.

We expect icons from horror movies, TV, and video games to pack out the event this year, including new variants and new designs for some iconic characters. Every Funko Pop! announced is scheduled to release in the months leading up to Halloween, but many will be instantly available to preorder from leading retailers. Keep an eye out for exclusives you’ll have to hunt down from specific stores.

Funkoween 2022 begins on May 17 and runs through to the 19th. We’ll keep this page updated with the latest announcements and brand new Pops that will be flying off of shelves soon.

The flagship announcement on the first day was confirmation that the popular supernatural anime Jujutsu Kaisen was finally arriving in Funko Pop! form, making the perfect way to prepare for the second season due to land in 2023. Pops that will be a part of the full set include:

As Sonic enjoys another run around movie theaters, Funko revealed this adorably scary edition of the hedgehog after taking a dose of Dark Gaia’s energy in Sonic Unleashed.

This Movie Moment captures the moment when Dumbledore showed Harry the magical mirror that could, as its name suggested, show the “deepest, most desperate desire of our hearts.” The “reflection” is an adorable touch.

Another Movie Moment, this time riding on the broomstick of Hocus Pocus’ enduring popularity. Stunningly captured, this collector set includes Winifred, Sarah and Mary Pops in a singing exclusive.

Another movie icon making its way to the Funkoverse this Halloween is Sam, the iconic spirit of Halloween famous from the 2007 horror movie Trick ‘r Treat. The two new Pops in this set include:

The boy with the prosthetic face has made it to the Funkoverse before, but this Halloween offers a chance to expand your collection. This Funkoween has revealed a wave of characters taken from the indie video game initially released in five chapters between 2016 and 2019. A highlight is the blood-splattered main character. The full set includes:

As talk of a reboot of the horror franchise grows at Lionsgate, the icon finally gets to menace in Pop! form. Not the first Leprechaun to make it to the Funkoverse ⏤ there’s even a Lucky Charms Pop! ⏤ but this is the horror original.

The Silence of the Lambs: Hannibal Lecter Funko Pop!

The 1991 version of Hannibal Lecter returns to Pop! form for the first time in three years. This may be his most disturbing look yet ⏤ suave and calm in his hospital, as chilling as it is collectible.

The smash hit Hunter x Hunter returns to Funko Pop! with a new wave. This is shaping up to be a great Funkoween for manga and anime, and Hunter x Hunter fans will be particularly pleased to see this new wave nearly half a decade since the last chapter of the saga was released. A new Pop! Moment scene is bound to be popular in a new collection that includes:

Can it be a Funkoween without some new offerings from the imaginations of Tim Burton and Henry Selick? It’s a colorful return for the animated classic that brought us the festive side of Halloween. There are eye-catching Soda vinyls and plushes to go with regular pops and two new bright and horrific jumbo pops of Jack Skellington and Oogie Boogie.

If you’d prefer something smaller, The Nightmare Before Christmas keychains are just as eye-catching and perfect for a shelf with the exclusive VHS cover featuring a Jack Pop. Following Funko’s Halloween countdown calendar, a new Nightmare version will cast a black light over your advent (which is what every fan wants).

The latest DC videogame is well catered for with this wave of Gotham heroes, including black light, glow-in-the-dark, and 10” collectibles. No Gotham villains yet, so it doesn’t sound too scary? Well, the video game is due out on PC, PlayStation 5, Xbox Series X, and Xbox Series S on Oct. 25, so it looks like DC is targeting a Halloween cash-in.

Mori Chack’s Naughty Grizzly, the cute abandoned bear with an edge, is a horrifically sweet addition to this year’s Funkoween.

Walgreen’s set of classic horror icons expands with the return of Frankenstein’s monster, this time with a black light makeover.

Last year saw an attempted takeover of Funkoween by some top-tier Disney villains, but typically it didn’t work out for this mean bunch. Collectibles have been rescheduled for later this year, with some new additions bolstering their ranks. Familiarity really should breed contempt, but don’t they look cute?

One infernally good addition is the new Villains Assemble Deluxe Hades – the first of a six-part character series (the rest revealed in shadow so far, although it looks like Ursula, Dr. Facilier, Kronk, and Scar will be joining him in this format).

Rounding out the second day of Funkoween 2022, some new additions to the ranks of Funko Soda figures. These collectibles packaged in a soda can, and rare chase variants, have some new genre heroes.

Everybody’s favorite family has demonstrated its staying power with a new wave of horror-themed characters. Watch out for the exclusives based on the show’s Treehouse of Horror specials.

This year marks the 100th anniversary of  F. W. Murnau’s Nosferatu — an iconic but controversial early adaptation of Bram Stoker’s Dracula that gave us a chilling alternative version of the Count. Fittingly, there are two versions of the vampire Count Orlok.

Just when we thought we’d seen all the Disney pops this Funkoween could muster, Mickey and the gang pop up to remind us what we should be doing this Halloween.

While you wait for Attack on Titan’s conclusion next year, Funkoween has brought us a new wave based on the anime’s third season.

Some stunning Pops! have been announced for one of Chucky’s most popular chapters. Chucky and Tiffany belong together!

Funkoween is a great excuse to celebrate the 40th Anniversary of the 1980’s most endearing stranded alien. This wave of figures based on the 1982 classic mainly focuses on the curiously happy extraterrestrial himself.

We’ve seen a Pop! of Prom Queen Carrie before, but this is the actual, bloody arrival of the telekinetic horror icon we know so well.

Halloween has never looked so adorable. The PakaPaka line brings some familiar faces to this Boo Hollow wave, featuring Pops!, plushes, and a series 3 set.

This Funkoween has shone a light on variants that feature bright colors that zing under a black bulb. The final day of Funkoween revealed some new black light versions of previously announced Pops! These icons are going to be popular with collectors.

It’s been an eclectic but bright Funkoween that handed starring roles to some horror icons. Don’t hang around. Every collectible is likely to be extremely popular when released later this year, so make sure you get your pre-orders in early.