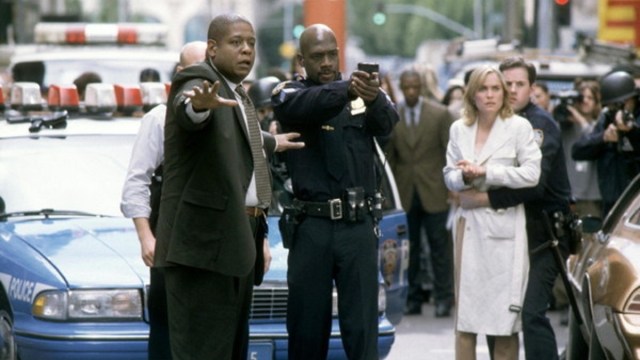 As technology continues to evolve, countless cinematic classics, cult favorites, and underrated gems become outdated, but the best examples never lose any of their impact. 20 years may have passed, and the core premise wouldn’t make a lick of sense in a modern context, but Joel Schumacher’s breathless Phone Booth continues to induce nail-biting anxiety.

The plot is so simple and sky-high that it borders on the ingenious. Colin Farrell’s arrogant publicist hears a phone ringing in an empty booth, so he decides to answer it. As he quickly discovers, though, that was the plan all along – and there’s a sniper with a target aimed right at his head.

The mysterious would-be killer’s demands are simple; he needs to face up to his sins and confess his misdeeds, all while the police surround the booth after the bodies start dropping, but he’ll be killed if he hangs up the phone. Driven by a phenomenal Colin Farrell performance, the movie delivers a brief 81 minutes of unrelenting intensity, and it still holds up today in spite of the central conceit being largely irrelevant in the smartphone era.

It’s been two decades since Phone Booth premiered and was instantly signaled out as a sleeper hit in waiting, which is exactly what happened after it went on to earn a stellar $98 million at the box office on a thrifty $13 million budget. Just because it’s essentially a B-tier thriller with an A-list creative team and Hollywood production values, that doesn’t mean it should be overlooked – something won’t be allowed to happen if Reddit has its way.

Even somebody who’s never stepped foot inside a phone booth will get a kick out of a pulse-pounding, claustrophobic hybrid of mystery, procedural, and dread-inducing examination of humanity that’s aged impeccably in every way, with the ironic exception of its setting.