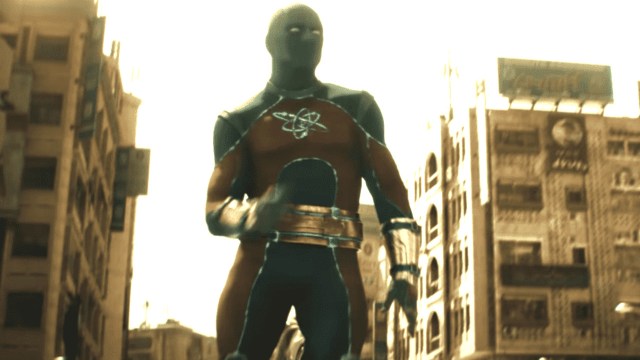 DCEU has not been having a whole lot of luck when it comes to adapting beloved DC characters from the pages of the comic books to the screen. Surprisingly, the recently released Black Adam has managed to impress viewers if its audience rating on Rotten Tomatoes is anything to go by. While the likes of Dwayne Johnson, Pierce Brosnan, and Aldis Hodge are the absolute winners in terms of reviews, fans are on the fence about Noah Centineo’s Atom Smasher.

Although Centineo’s Al Rothstein, aka Atom Smasher, is a part of the Justice Society of America and possesses superpowers of his own, his presence in the film nowhere near mimics the significance he enjoys in the comic books.

Apart from getting minimal screen time alongside Quintessa Swindell’s Cyclone, his character doesn’t get a proper background story and mostly functions as comic relief. Now, not every character needs a shelled-out origin story, and bringing some light moments to an otherwise tense setup—which is the DCEU trademark—is always appreciated. However, DC fans are not harboring many unanimous thoughts about the character based on the comments on an ongoing Reddit thread.

The original Reddit post, which kickstarted the debate, is completely in favor of the character, believing that Centineo did a “great job” with what little he got in terms of screen time and character development.

Some were quick to agree with the sentiment, sharing how Atom Smasher didn’t get the screen space he deserved and stressing that future films could rectify this error.

Not everyone was enamored by Centineo’s charm or his dialogue when he did appear on the screen.

One user is sure Atom Smasher would fall short of the high expectations of DC fans.

Some fans couldn’t help but compare the character to MCU’s Spider-Man.

Even though it is evident that the character didn’t do much in the film, the reigning consensus is that Atom Smasher deserved a prominent role and still has potential.

The future of the JSA in the DCEU looks positive given how things ended in Black Adam. With a sequel all but confirmed, we can expect the Atom Smasher to buddy up with the DCEU anti-hero once again, hopefully with a better character arc and more screen time in the next installment.