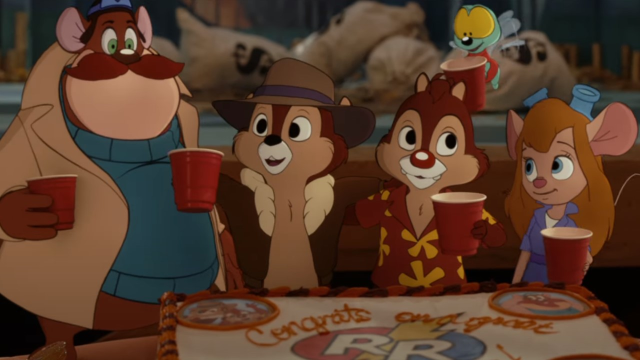 There hasn’t been any film quite as out-of-left-field this year as Chip ‘n Dale: Rescue Rangers, the Disney Plus action comedy featuring the titular ’90s darlings reimagined as down-and-out actors who get wrapped up in a race to rescue their dear friend and former show mate from a diabolical fate.

The film’s deft handling of meta humor, one of the trickiest beasts in entertainment, was nothing short of enchanting, and the mixtures of different animation styles and subsequent crossovers made for a film that was as fun as it was uncanny.

It seems the writing gods were grinning ear-to-ear down on writers Dan Gregor and Doug Mand, as the duo seemed to stumble upon the opportunity to get their bizarre masterpiece released on the whims of sheer luck. Mand, in an interview with The Wrap, detailed how the duo focused hard on their creative process, not thinking that the film would ever get made.

The bottom line is that we cannot believe this movie got made. We just cannot believe it. You watch it and I watch it and just like, Holy shit, how did this happen? You want to write the best piece of material, especially that first draft. That part wasn’t really a challenge, it was just Dan and I talking to each other and being like, “What’s make going to make us laugh? What characters, what pieces of IP tell the best version of this story?” With the thought and the actual conversation constantly happening of us going, “I mean, they’re never going to make this movie, so why not?” And then they did.

Mand also pinpointed Who Framed Roger Rabbit? as the film’s primary inspiration, noting the similarities between the two films’ use of crossover.

Roger Rabbit,’ one of the great joys of watching that movie was seeing Warner characters with Disney characters, and we wanted to create that feeling of like, Oh my God, I can’t believe why I’m watching these characters share the screen with each other. And Disney was on board with that, so it became a question of every one of those characters you see in there was just an individual negotiation that happened.

Chip ‘n Dale: Rescue Rangers is available to stream on Disney Plus.