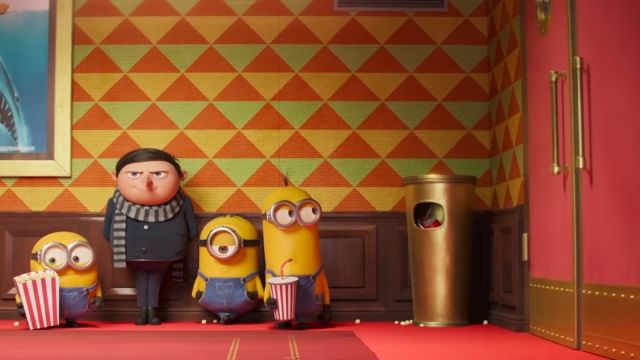 How far does someone have to go before a trend or activity gets ruined for everyone? This is exactly what has happened after the #Gentleminions trend blew up on social media. Now, cinemas are barring entry to anyone wearing formal attire to watch Minions: The Rise of Gru.

Twitter user @gillduds shared a sign that was posted on Odeon Cinemas in the UK, where it said that anyone wearing formal wear will be barred from entry to watch the Minions sequel due to guests causing disturbances.

Some of the disturbances reported by various cinema staff and moviegoers are banana throwing, loud noises, and leaving behind a massive mess. This is to be expected, especially since the trend has 10-30 people watching the same movie together in suits.

Cinema staff shared on social media that the trend went too far as they had to clean up a massive mess left by a large crowd, as well as heard noise outside the cinema.

Since the sign began to trend on social media, many brought out a sigh of relief as they looked forward to a silent movie-watching experience. Others started to complain, comparing this ‘ban’ to George Orwell’s 1984. Some fans were also confused as well since both Universal Pictures and the Minions encouraged suit-wearing when watching the film.

If you do intend to take part in the trend, please respect the cinema you’re entering. It may be fun for you and your friends to loudly react to a children’s movie, others just want a silent movie-watching experience. Also, the movie staff worked tirelessly just so they clean after your mess. So if you are going to be a ‘Gentleminion’, be a gentleman and respect staff and other patrons. Don’t be surprised if your cinema enacts a similar ban if things go too far.

Minions: The Rise of Gru is now showing in cinemas.