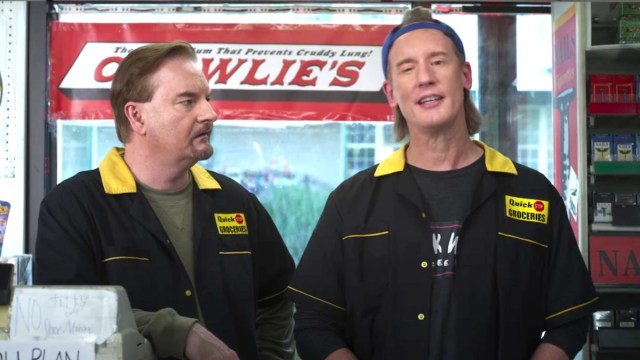 The long awaited sequel to Clerks, Clerks III, is almost upon us, and returning star Jeff Anderson has some things to say about returning to the Kevin Smith directed movie, and how it feels to act out some of the personal things Smith went through.

Anderson returns to play signature character Randal Graves, and in the movie he gets a heart attack in a situation that mirrors something that happened to Smith in real life. After the heart attack, he decides to make a movie with fellow clerk Dante Hicks (Brian O’Halloran).

In an interview with Digital Spy, Anderson admitted it was “sort of odd” to act out Smith’s real life experiences.

“It’s like knowing what Kevin went through and sort of bringing it to this character as Kevin was going through it,” he said. “We kept in touch so I kind of knew a lot of what he was going through [with his heart attack].”

Anderson also said “it was a little surreal sort of playing” Smith’s part.

“You know, there were little things that I kind of threw in there that are things that Kevin really does – just mannerisms and things that people probably won’t catch, but Kevin caught them. We would sort of have this little thing, I’d just give him a look you know, to say ‘I [took] this from you’ but yeah, it’s a little odd sort of playing it.”

Smith previously said he was sentimental about the project knowing it was probably the last time we’d see the characters from Quick Stop Groceries. He said the movie was definitely a comedy but that it has serious moments as well.

“It’s weird because somebody’s like ‘Hey, you’re gonna watch Clerks III‘ and you’re like, ‘I can’t wait to laugh’ and there are laughs but then all of a sudden, the whole last third of the movie is like: ‘Do you want a tissue?'”

Clerks III is in theaters tomorrow.