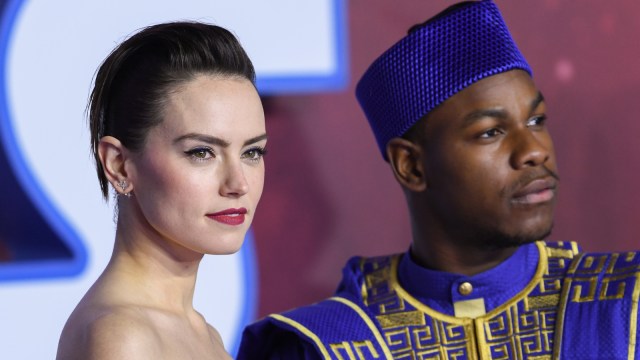 Every big-name actor working today probably goes into every interview expecting to be asked if they’re joining the MCU. Partly because it’s something the fans want to know, but also because Marvel is working on so many projects these days that the interviewer stands a good chance of landing an exclusive. And yet they likely don’t expect one of their old pals to crash the interview and grill them on the topic instead.

And yet that’s just what happened to John Boyega when he was chatting with Happy Sad Confused host Josh Horowitz and was played a video message from his former Star Wars co-star Daisy Ridley. The Rey actress told Boyega that she was asking him to look Horowitz straight in the eye and promise that he doesn’t have a project with Marvel lined up. Check out the unexpected crossover moment via the video below:

After reacting with surprise at Ridley’s sudden role in the interview, Boyega complied with her request and stressed to Horowitz that, no, he isn’t part of the Marvel universe, saying:

Boyega did, however, make clear that he’s a big fan of watching Marvel movies, revealing that he’s thinking of catching the Spider-Man: No Way Home re-release when that comes out next month. The Attack the Block actor then admitted that Ridley would be the one to quiz about this as “she’d be the one of the first to know” if he did land a big role in a Marvel film. Boyega even cheekily suggested that her question was meant to thrown suspicion off herself and she‘s secretly joined Team Marvel, voicing his interest in seeing her as Spider-Woman.

John Boyega can currently be seen in indie thriller Breaking and he also has a role in Sony’s The Woman King, out Sept. 16.