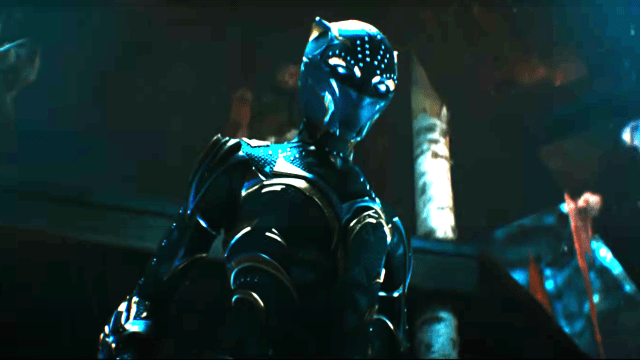 If you’ve already seen the latest trailer for Black Panther: Wakanda Forever, you probably already know that a tease at the end of the preview appears to all but confirm once and for all that Letitia Wright’s Shuri is the new Black Panther, owing to clip we see of a woman donning the costume that has the white dots on its mask that match Shuri’s design. The costume with the white dots can be seen at the 1:52 mark of the trailer.

However, a blink-and-you-miss-it shot earlier in the trailer shows another depiction of someone in the Black Panther costume, only without the white dots. This very brief shot can be seen at the 1:29 mark of the trailer. The shot in question shows Tenoch Huerta in the foreground stabbing a spear into the ground. In the background, a person in a Black Panther costume with a solid black mask that has no white dots can be seen. When Namor makes the stabbing motion, the person wearing the Black Panther suit jumps up, as if to perhaps get ready to pounce on Namor. This is all happening while Angela Bassett’s Ramonda can be heard saying, via narration, “Now is our time to strike.” Take a look at our own screengrab below:

A screengrab of the shot similar to the one above, which has been shared on the r/MarvelStudios subreddit, has become a discussion point amongst Reddit users.

One Reddit user’s theory was that the Black Panther we see in the scene is not Shuri, but her mother, Ramonda, who has taken the suit without the superpower-aid of the Vibranium-infused Heart-Shaped Herb, which were all destroyed by Michael B. Jordan’s Erik Killmonger in the first film. It is only after Ramonda dies after attempting to challenge Namor that Shuri reluctantly takes up the mantle.

However, when another commentator pleaded “please no more mom figures dying in the MCU,” the original-poster contended it could be the exact opposite of their original theory.

“Shuri in a no-herb suit early on, SHURI dies, and it’s Ramonda at the end (and until the scion of T’Challa and Nakia comes of age).”

Another commentator elaborated on this theory, saying Ramonda’s line “I have lost my entire family” in the trailer could be hinting at Shuri inadvertently getting herself killed early on in the movie by trying to use the Black Panther suit without the herb. This would also be convenient for Disney to write off the character due to Wright’s controversies as a public figure in recent years, the Reddit user said.

Another theory is that the supposed second Black Panther is a complete misdirect by way of being a flashback of some kind.

One commentator wasn’t entirely convinced the supposed second Black Panther was actually a different suit. Rather, it could have been the same one, just without the white dots yet applied to it.

There is a brief moment in the clip where we see the torso of the suit, which we will admit appears to have the same kind of gold-ornamentation on the chest area that resembles the final white-dotted suit that we see at the end. We could easily the suit being Shuri’s initial prototype that simply gets an aesthetic upgrade later in the movie.

Guess we’ll find out who will be the next Black Panther — and just how many of them there are — when Black Panther: Wakanda Forever comes to theaters on Nov. 11.