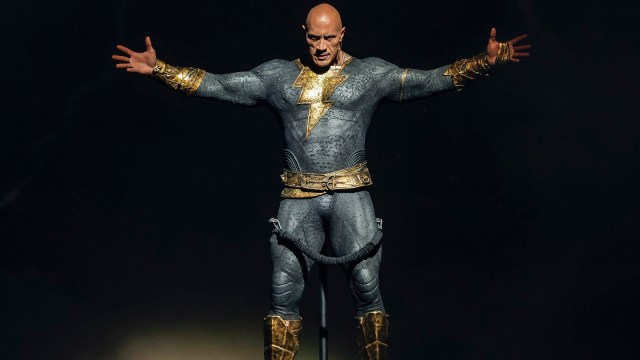 Dwayne Johnson has been hyping up his appearance at San Diego Comic-Con for a while now, so expectations were high that the biggest movie star on the planet was going to deliver the goods. The Black Adam showcase has only just gotten underway, but The Rock has already taken the roof off the joint by showing up in full costume.

Not only that, but through some good old practical effects wizardry, he’s even been levitating and floating around the stage. At this point, we could be talking about one of the most memorable Hall H presentations we’ve ever seen, because nobody’s Black Adam bingo card had Johnson literally flying around the stage as smoke billows ominously behind him.

Sadly, Johnson did vanish after his grand entrance and return dressed like regular old DJ again, but it was one hell of a way for him to make his arrival into the Comic-Con spotlight.

It’s been a long time coming for Black Adam, which the former professional wrestler first attached himself to over 15 years ago, with the fruits of his labors coming to the screen in October at long last. Based on how often we’ve heard it, we’re inclined to believe that the hierarchy of power really is about to change having been hearing it for so long.

Johnson re-teams with Jungle Cruise director Jaume Collet-Serra on Black Adam, which is poised to make serious bank at the box office given the presence of the A-list megastar in his first substantial role as a costumed crimefighter, which means Warner Bros. are likely planning sequels already.