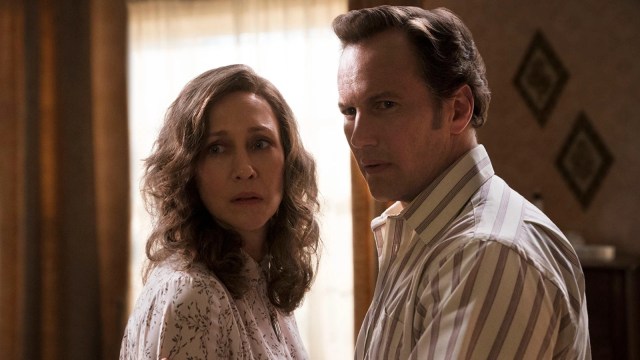 There’s no denying that 45-year-old Australian director James Wan is one of the most influential filmmakers to have ever lived, especially in regards to defining the horror genre. As creator of The Conjuring Universe, the highest-grossing horror franchise at a staggering $2 billion, James Wan started out his long and prosperous career with a directorial debut in 2004. Aside from taking creative charge on several projects, Wan can also be credited as a producer, screenwriter and comic book writer.

Making his directorial debut with Saw (2004), Wan would capitalize on its global commercial success and later return with the Insidious quadrilogy as well as The Conjuring Universe from 2013 onward. Outside of horror, Wan has dabbled in the DC Extended Universe with Aquaman (2018) and even Furious 7 (2015), the seventh installment in the Fast & Furious franchise. From Saw onwards, Wan would be known to collaborate with his friend Leigh Whannell, a scriptwriter and occasional actor. The Conjuring made him famous, but is it his best?

After bashed as one of Wan’s worst ventures, The Nun (2018) is the spin-off/prequel to The Conjuring 2 and the fifth installment in The Conjuring Universe, unfortunately paling in comparison to its predecessors. Although Wan didn’t direct The Nun, the reception might have been quite different if he had. English director Corin Hardy spearheaded the spin-off, while Wan took a backseat as the story’s scribe.

The Nun follows Sister Irene and Father Burke, two religious figures who seek to uncover the sinister secrets behind a tragic occurrence at Saint Cartha’s monastery in 1952 Romania. Although The Nun miraculously became the highest-grossing film in the whole franchise with $365 million worldwide haul, it was poorly received by critics and audiences alike, who panned the poor narrative and inconsistency.

Rounding out the Annabelle trilogy, Annabelle Comes Home (2019) sees James Wan in a dual-role as producer and storywriter. Gary Dauberman makes his directorial debut with the seventh installment in The Conjuring Universe and the sequel to Annabelle (2014) and Annabelle: Creation (2017). Inevitably, even Vera Farmiga and Patrick Wilson’s star power as Ed and Lorraine Warren couldn’t keep Annabelle Comes Home above water.

Critics found it less frightening than its predecessors, making for an overall underwhelming sequel. In the sequel, Ed and Lorraine Warren confiscate the Annabelle doll after reports of violent incidents but chaos ensues after two teenagers, Mary Ellen and Daniela, inadvertently unleash Annabelle’s spirit. At times, Annabelle Comes Home is a corny reminder that the stand-alone trilogy is a shell of its former self and name value alone can’t save a sinking ship.

Malignant is one of Wan’s most recent endeavors. It stars Annabelle Wallis as Madison Lake-Mitchell, a pregnant woman in an abusive relationship with her boyfriend, Derek, who begins having premonitions of people being murdered, only to discover that the deaths are happening for real. Directed by Wan and written by Akela Cooper, Malignant wasn’t nearly as well-received as some of the Australian’s other works. In fact, grossing only $35 million at the global box office, Malignant failed to break even against a $40 million budget.

Many reviews found the film laughable, saying that “viewers will find themselves laughing not with the film, but at it,” and “at least you can laugh along in utter shock with your fellow theater-goers.” Some other analyses claimed that Malignant made a much-needed shift midway through the script, but it was too little too late to prevent the raging wildfire from spreading and engulfing the final act in flames. Arguably one of Wan’s weakest efforts, even compared to The Nun and Annabelle Comes Home, but honestly, they’re all tied at dead last.

Usually, as with most trilogies, the original is unmatched, the sequel is so-so and the sequel to the sequel is a major embarrassment to the franchise. The Conjuring started out strong in 2013 and even in 2016 it didn’t show signs of slowing down, but the third installment in The Devil Made Me Do It could be compared stylistically and thematically to the B-movie Drag Me to Hell (2009), which — despite becoming a cult-classic — attempts to obscure some comical special effects and a flawed narrative. Even though The Conjuring and The Conjuring 2 came from a more humble technological era, it can be argued that both films felt more grounded and realistic in spite of limitations, whereas The Conjuring: The Devil Made Me Do It had too much potential and unfortunately squandered it.

Once more, Wan wasn’t calling the shots on this one; it was Michael Chaves, the director behind The Curse of La Llorona (2019) who the reins. Even Farmiga and Wilson’s performances couldn’t save the James Wan vessel from public ridicule, especially where the screenplay was concerned. Although it can classified as a box office success with a $206.4 million haul, it wasn’t a scratch on the previous films.

Despite getting panned by critics, Dead Silence is widely considered to be one of Wan’s finest hours and a definite sleeper hit. It doesn’t rank higher than sixth for the simple reason that so many other Wan-led projects outdid it by a country mile. Three years after the success of Saw, filmmaking duo James Wan and Leigh Whannell return as director and writer, respectively. Dead Silence follows a widower who returns to his hometown after the sudden death of his wife to search for answers about a mysterious ventriloquist doll. Operating on a $20 million budget, Wan’s Dead Silence barely broke even, only managing to bring home $22.4 million.

Despite this, it has garnered a cult following in recent years and has been cited as an iconic supernatural horror, especially in the spiritual/demonic/possession sub-category. Generally unfavorable reviews gave Dead Silence a poor reputation, especially the haunting critical consensus on Rotten Tomatoes, which forever reads, “”More tasteful than recent slasher flicks, but Dead Silence is undone by boring characters, bland dialogue, and an unnecessary and obvious twist ending.”

Most of the time, sequels never touch the classics. Eventually, after the roaring success of the first film, most franchises keep cranking out sequels to make money rather than enrich the story. Sadly, Insidious fell into that pitfall trap. There’s no denying that Insidious far outweighs its lackluster sequels, but Chapter 2 gives a valiant effort to recreate the appealing terror of the original. Wan’s leading man Patrick Wilson returns as Josh Lambert, who hopes to learn more about an inexplicable connection that leaves him tethered to the spirit world. Just like Dead Silence, dream team James Wan and Leigh Whannell reprised their usual roles as director and screenwriter and Insidious: Chapter 2, even with a $5 million budget, reeled in a massive $161.9 million at the international box office.

As always, Patrick Wilson (who’s making his directorial debut with the sequel to Chapter 2, titled Insidious: Fear the Dark) and Ty Simpkins steal the show, but even though it does its job of scaring audiences, Chapter 2 has been criticized for lame dialogue and an atmosphere that isn’t quite so chilling as its predecessor. Regardless, it expands on an established universe and tells us more about the Lambert family, so in a sense, it ticks all the right boxes.

There is a lot of discourse surrounding The Conjuring 2 and its status compared to the original; some viewers find the sequel more unnerving and memorable than The Conjuring, while diehard fans remain steadfast in their opinion that the first film always surpasses the rest. Like the other installments, The Conjuring trilogy draws inspiration from real-life paranormal investigations conducted by Ed and Lorraine Warren. The Conjuring 2 is based on the 1977 case surrounding the Enfield poltergeist, an entity tormenting the Hodgson family in London, England. Wan directed and even tried his hand at penning the screenplay for the first time in the franchise alongside Chad Hayes, Carey W. Hayes and David Leslie Johnson.

If nothing else, The Conjuring 2‘s haul of a staggering $321.8 million against a $40 million budget is a testament to the unwavering popularity of The Conjuring Universe and the devotion of its fans. The film was not only the highest-grossing horror film of the year, but also the second-highest-grossing horror film overall of all time behind 1973’s The Exorcist. That’s insanely impressive, especially keeping in mind the slander that sequels after face.

Without a shred of doubt, Insidious is beyond terrifying. The Lipstick-Face Demon — a name under which it has come to be universally known — remains one of the most horrifying creatures in horror history. Its physical appearance resembles Star Wars‘ Darth Maul, but even that science-fiction figure is nothing on whatever monstrosity James Wan dreamt up. Based on statistics, the 2010s were a profitable and monumental decade for horror; The Conjuring, Insidious, The Witch, It and Us are among the many contenders for stand-out feature during that crucial time.

While horror originated in the ’70s, the modern era didn’t kick-start until the 2000s onwards. Insidious centers on the Lamberts, specifically Josh and Renai, whose son Dalton falls into a coma and becomes a vessel for hostile entities in a spiritual realm. Do we even need to say it? Wan and Whannell collaborated on Insidious, which seems to be a recurring theme for the most successful of the former’s films. Against a measly $1.5 million budget, Insidious earned $99.5 million, proving that low-budget films are still all they’re cracked up to be.

Steering away from The Conjuring Universe, Wan’s directorial debut came with Saw, which also happens to be one of his best films hands-down. Not only did Leigh Whannell pen the screenplay, but he also starred as one of the film’s main characters, Adam Stanheight. Once Wan sealed the deal with Tobin Bell as John Kramer, there was no stopping the Saw franchise from prospering and flourishing into a massive biological horror hit. With an even smaller budget than Insidious, it only cost $1.2 million to make Saw, while the profits exceeded $100 million. Figures don’t lie. Saw is perhaps Wan’s biggest success both critically and on paper.

Everyone saw it coming, unlike the twist in Saw. Of course, The Conjuring trumps all of Wan’s other films. Against a $20 million budget, The Conjuring garnered an insane $319.5 million. On the tail-end of Saw, Wan redirected his course toward supernatural horror, taking inspiration from paranormal investigators Ed and Lorraine Warren and their findings. The Conjuring focuses on The Warrens as they are called to assist the Perron family, who had started experiencing paranormal events within their farmhouse in Rhode Island in 1971.

Critics and audiences alike have agreed in recent years that The Conjuring revitalized the supernatural horror genre, especially in the time after Paranormal Activity‘s release. What’s so effortless about The Conjuring is that it doesn’t try to reinvent horror tropes, it just strips horror down to its bare bones and makes magic out of it, even if that magic is the stuff of nightmares. It produces an atmosphere that doesn’t feel forced with scares that aren’t cheap, aren’t over-used and definitely aren’t ineffective. Wan outdid himself here.