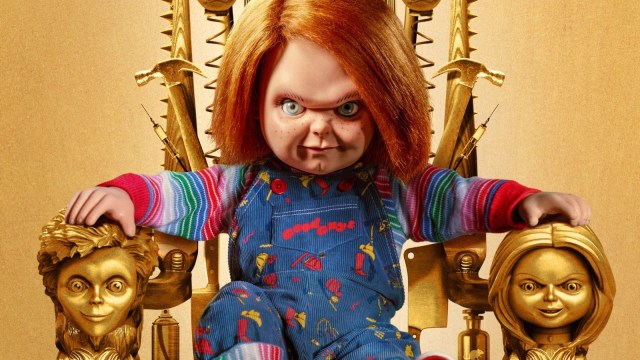 You can’t keep a good (or fundamentally evil) slasher villain down, and that’s more true than most when it comes to Chucky of the Child’s Play franchise. Originally known as the Lakeshore Strangler, Charles Lee Ray was already a notorious serial killer before he transferred his soul into a seemingly innocent children’s toy, but his crimes increased exponentially once he was able to contravene the natural laws of life and death.

Ever since Brad Dourif made his debut as the diminutive but deadly doll in 1988, Chucky has died, been resurrected, and died all over again countless times over his many sequels and in the currently ongoing Chucky spinoff TV series. And with Chucky back for its second season, now’s the perfect time to reminiscence on the many, many deaths of Charles Lee Ray and how he came back from the dead each time.

The original Child’s Play opens as the franchise means to go on by depicting Chucky’s original death. Once Detective Mike Norris (Chris Sarandon) fatally wounds the fleeing killer after tracking him down to a toy store, Ray transfers his soul via voodoo into a handy plastic receptacle and lives to murder another day.

At the end of the movie, meanwhile, Chucky meets his first end in doll-form, in particularly brutal fashion. After being burned in a fireplace by Andy (Alex Vincent), and then shot to pieces by Karen (Catherine Hicks), his headless body is then shot through the heart by Jack (Tommy Swerdlow), Norris’ partner.

In Child’s Play 2, the parts of the Chucky doll are reconstituted by the Play Pals Corporation to legally prove that there was nothing afoul about the toy. Obviously, this likewise revives the killer, who once again goes after Andy Barclay.

Andy and his foster sister Kyle (Christine Elise) are ultimately able to best Chucky again, however, during a showdown in a Play Pal factory. First, he’s mutilated in a doll assembly line machine before being covered in molten plastic by Andy. Kyle then properly finishes him off by sticking an air hose in his mouth, causing Chucky’s head to swell up and explode.

Eight years after the events of Child’s Play 3, the Good Guy dolls factory resumes operation and a drop of Chucky’s blood ends up in the plastic mold for one of the toys, thereby granting him a new body. Chucky then sets about tracking down the now-teenage Andy (Justin Whalin) to Kent Military School.

This time around, Chucky is trying to transfer his soul into Tyler (Jeremy Sylvers), a young boy also attending the school. Andy manages to save Tyler during the climax — set at a haunted house ride at a local carnival — by throwing Chucky into an industrial-sized fan, viciously tearing him to shreds.

Bride of Chucky begins with Chucky’s former lover and fellow psychopath Tiffany Valentine (Jennifer Tilly) retrieving Chucky’s shredded remains from a police evidence locker and crudely stitching him together, before once again reviving him with the voodoo spell.

Unfortunately for Tiff, reviving her murderous ex turns out to be a bad move, as Chucky quickly kills her and transfers her soul into a female Good Guy doll. The pair then set out to retrieve the Heart of Damballa amulet from Ray’s grave that will allow them to transplant themselves into their chosen human vessels, young couple Jade (Katherine Heigl) and Jesse (Nick Stabile).

Tiffany ultimately has a change of heart, though, and stabs Chucky, who is thrown into his own grave by Jesse. Once Lt. Preston (Lawrence Dane) arrives, Jade grabs his gun and repeatedly shoots the killer doll in the chest.

Seed of Chucky begins with Glen (Billy Boyd), the unholy spawn of Chucky and Tiffany, infiltrating the set of Chucky Goes Psycho, a movie based on the murders, and reviving his parents using the animatronic dolls created for the film.

Over the course of the film, it’s discovered that Glen has an alternate personality, Glenda, who is perhaps even more unhinged than her father. Still, it is the sweet-natured Glen who ends up first dismembering and then decapitating Chucky. Although the final scene suggests Chucky’s disembodied arm got the last laugh…

In Curse of Chucky, paraplegic recluse Nica Pierce (Fiona, daughter of Brad Dourif) receives a Good Guy doll in the mail. Yes, it’s Chucky, and we later learn that Tiffany — now in the body of her famous lookalike, Jennifer Tilly — mailed him there on his orders, as Chucky had a score to settle with the Pierce family.

Uniquely, Curse doesn’t actually end with Chucky’s death, as Nica is thought insane and incarcerated for her persecutor’s crimes. The post-credits scene does see him get shot in the head by Andy, after he mailed himself to his old foe, but the sequel establishes this isn’t as fatal as it looks.

OK, here’s where things get complicated.

Cult of Chucky‘s unique USP is that Chucky has now figured out how to split his soul into multiple dolls, so there are numerous Chuckies causing havoc. This includes a short-haired model who’s ultimately bested by Andy when he stomps on the doll’s head. Chucky still gets the last laugh, though, as another portion of his soul possesses Nica and escapes.

A post-credits scene depicts Kyle discovering the disfigured decapitated head of the doll Andy shot in Curse, which she deals with off-screen (according to a line in the TV series).

Chucky season 1 initially goes back to basics, with adolescent doll collector Jake (Zachary Arthur) acquiring an apparently normal Good Guy doll from a yard sale, but things get truly insane by its end. It turns out Chucky has managed to bring an army of himself to life, with which he plans to murder his way through the entire country.

Chucky’s plans are scuppered, however, when no less than three of the dolls are killed across the final two episodes. First, one is decapitated by Tiffany and then blown up along with the Ray family home. A second is then stabbed in the heart by Jake’s cousin Junior (Teo Briones), while Jake manages to overcome a third and choke him until his eyeballs pop out of his plastic head.

History has taught us there’s no way to chuck Chucky off this mortal coil, and sure enough he’s up to more mischief in Chucky season 2, airing Wednesdays on SYFY/USA.