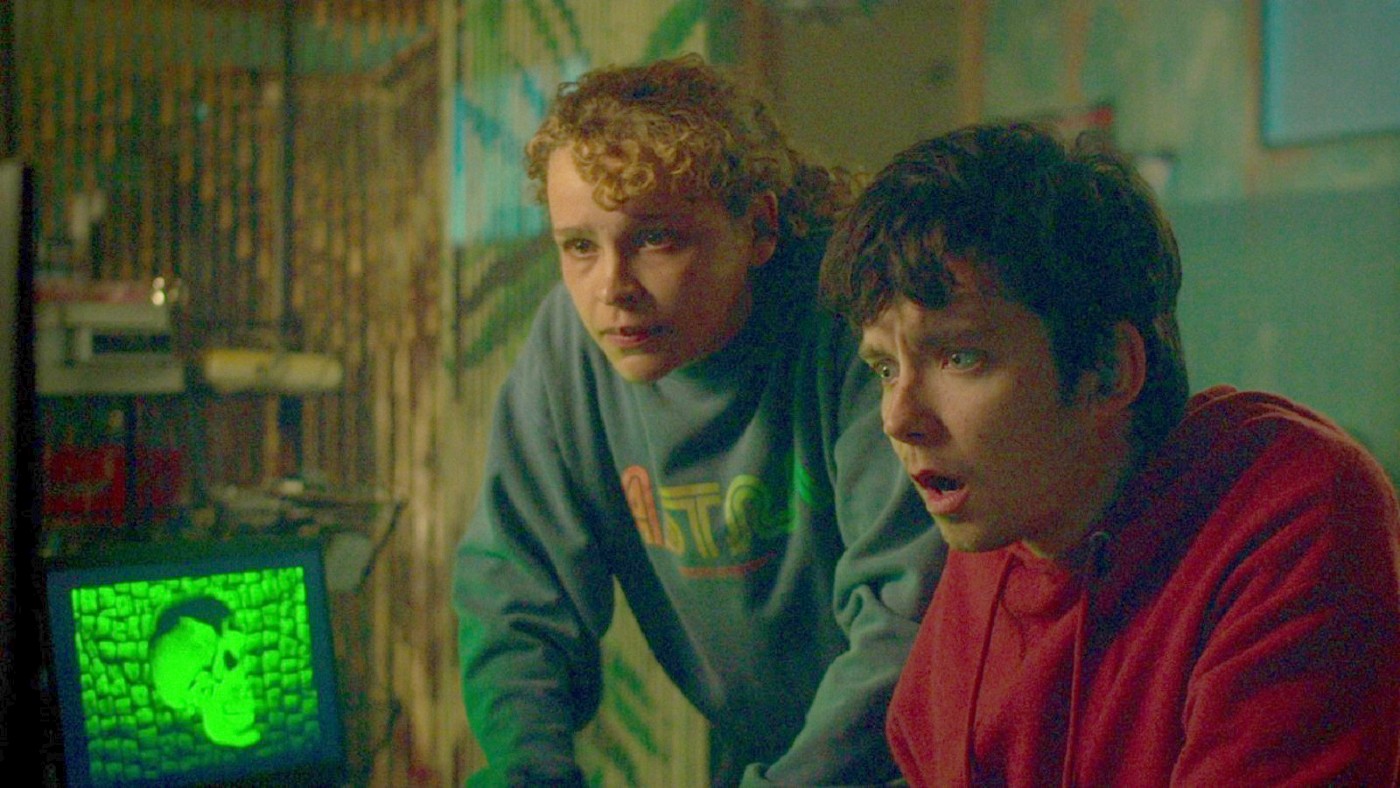 Choose or Die, formerly known as Curs>r, has been streaming on Netflix since April 20 and riding high on its global Top 10 list ever since. This indie horror hybrid combines retro gaming tech and psychological horror tropes into a cinematic cocktail of undeniable depth.

Writer Simon Allen and director Toby Meakins recently took time out to talk to We Got This Covered about the project. From the challenges of shooting in lockdown to indie filmmaking as a whole, both talk candidly about the obstacles and advantages which come with working in that arena.

Where did the idea for this project come from?

SA: It all started when we made a short film called Floor 9.5, which went out on Fox in 2017 and caused an uproar. It was a viral sensation and we were offered the opportunity to make something similar, having done other horror shorts together in the past. We came up with Choose or Die, which was a play on words and referenced eight-bit technology, through cursed gaming code.

SA: It was Toby that said, if you’re going to have this kind of archaic artefact from the 1980s, you should have someone contemporary being menaced by it. Those two things together created this idea of a contemporary character who has a problematic relationship with that kind of pop culture iconography and artefacts from this era.

SA: At one point, Ridley Scott was attached to it as an executive producer, it was going to be a Quibi project for Jeffrey Katzenberg who loved it. It was going to be one of their big shows, but then that fell by the wayside. Toby then reconceived it as a low budget horror film, with a distinctive indie vibe. Quite out of the blue Netflix saw it, loved it and wanted to roll with it. They took this punky raspy little indie horror film from Britain and put it on the biggest platform in the world. It’s been extraordinary.

Other reviewers, who have watched Choose or Die, made comparisons to the Saw franchise, but for you personally, what films actually influenced it?

TM: It’s an interesting comparison because we were never trying to make something like that. It was always about the work of M R James for both of us, while films including Pulse, The Others and the original Candy Man also became influential.

Considering his legacy and connection to that era, how easy was it to get Robert Englund on board?

TM: We had a great American producer in John Zois who just sent the script to Robert direct. We did a really great voice recording session with him, in which he told us how best to use his vocals. He also gave me some solid advice as a first-time filmmaker as well, which really added to the experience.

SA: It’s worth pointing out that Choose or Die was shot in lockdown, so we couldn’t get people over from America anyway. I think Robert really did love it, he was really engaged and supported it on Twitter and everything, which is fantastic. It was just an incredible bonus when he responded so well to Toby, who ran the voice sessions. It sounded like an absolute riot and we kept getting footage and clips that were fantastic.

Asa Butterfield is quite an interesting choice to play Isaac. Did his connection to Netflix’s Sex Education play any part in the casting process?

TM: Basically when you make an indie film, and you want to get it made, you have to have the level of actor that’s going to get the film greenlit. Asa is technically one of the best actors I’ve ever worked with, but also you need someone like that to get projects financed. That’s the process.

SA: We had to do this Zoom call with him, and we were literally told if it goes well, you’ll be greenlit afterwards. I was really primed and pumped, but Toby’s much cooler than I am, so he was more relaxed. I believe Asa was still shooting Sex Education at the time and he had all this kind of gaming paraphernalia in the background. He was really enthusiastic about the script and had even made his own eight-bit game I think.

TM: He is a massive gaming fan and really loved the project. Robert was really clear with one piece of advice that he gave us, which was to make sure the film has levity. Asa does a fantastic job of bringing that to Choose or Die and not just as comic relief.

Between you two creatively, Simon’s the writer, you’re the director, but you are co-creators of the piece. How does that collaboration work between you outside of the movie stars and the actual process itself?

SA: One of us has an idea and the other one augments it. Over time we roll with it and we push back and forth. I think it’s really important to stress that this is a Netflix thing and we’re so proud that they’ve done it. We’re particularly proud that they took something on which is subverting a lot of their holy grails. However, it’s still an indie film that’s gone out and hit number one for them everywhere in the world. It was really strange being sent a chart with Turning Red at number two, The Adam Project at number three and us at number one.

SA: In the past, this has always been a creatively low key thing between us based on trust. We are old friends, we’ve worked together for so long, and for me, it has always been where I’ve been at my most creative. I have been able to do the things that I am really interested in, which usually no one will pay me to do. However, the reaction to Choose or Die has been overwhelming.

TM: Going back to the short films; it is always about finding an audience. When we made Floor 9.5 for Fox, they basically approached twelve filmmakers. They told all of those people that their films were going to be broadcast, when in fact they were only taking four. Each of them was then tied into adverting centred around Skittles and Mars.

TM: As Halloween is so big in the States, what they did is they bought advertising slots on primetime television, then picked the four films they thought would work the best. Ours was like Skittles presents bite-size horror, which was aired in the ad breaks during the baseball playoffs, which was awesome.

The soundtrack plays such an important part in the film. How did Liam Howlett from The Prodigy become involved?

TM: We didn’t want a classic horror score, we wanted to do something different. Originally, we started looking at some indie bands, but our music supervisor knew Liam Howlett’s manager and said he would be quite interested. We had a good initial meeting and then six weeks later some tracks turned up in my inbox.

TM: Even before we started shooting, the DNA of Liam’s music, which was this really cool dark soundscape stuff, influenced the way we were thinking about the film. Just saying he did the score is really selling him short, as the whole sonic soundscape of the film came from him.

SA: I suppose in terms of the films, Choose or Die is an indie film and it did have a constrained budget and that was baked into the way it was executed. It has always been about what we know we can achieve. The great thing about our relationship is that we can have these very complex visual ideas and Toby always figures out a way of achieving them with minimal resources. I thrive on that and I find that amazing.

I have worked on shows with huge budgets and it doesn’t necessarily make you better. I think that sometimes restrictions do help because you solve things practically and tangibly and I love that kind of handmade quality, which I think you can see in Choose or Die.

SA: I would love all the time in the world and all the money in the world, but I think that there is something really true and honest that happens when you’re up against it. I think almost anyone who works in film and television if they’re being honest, would say solving problems is the most exciting thing about this job and this industry.

As you progress and work with more and more people, you very quickly learn that the people that really endure are the ones that are good at doing that. They are not the ones that sit back and make assumptions about how easy it is to do these things but understand what it’s like at the coalface. So I like the creativity of problem-solving and I think you can see that in this movie.

TM: Often time money becomes irrelevant because people want to sell it or it’s got to be shown at a certain point anyway, so you’re already working to a restricted deadline. If that was the case, give me the money every day of the week.

On that bombshell, let’s just add what an absolute pleasure it has been talking to Allen and Meakins. And in case, our chat triggers your inner horror fan, Choose or Die is currently streaming on Netflix.