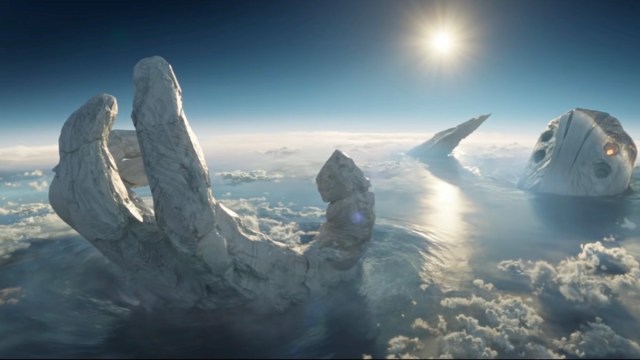 Marvel Cinematic Universe fans are still waiting on tenterhooks to discover the fate of Eternals, the franchise’s worst-reviewed entry ever that brought in a solid-if-unspectacular $400 million at the box office. There’s plenty of support for the cosmic epic, but even if a sequel doesn’t happen, someone has to address the ending in canon sooner rather than later.

Lest we forget, it was revealed during the course of the film that the entire planet is essentially an incubator designed to bring a new Celestial to life. While the titular team succeeded in their goal of preventing Tiamut bursting free and destroying everything and everyone on Earth, it’s not the sort of thing that can be swept under the rug and forgotten about.

The gigantic partially-emerged extraterrestrial life from sticking halfway out of the Indian Ocean is hardly subtle, but as of yet, it hasn’t been overtly mentioned by anyone who exists within the MCU. It has to be brought up eventually, then, and fans over on Reddit are wondering who’ll get the honor.

As you no doubt could have guessed, the inevitable debut of Tenoch Huerta’s Namor in Black Panther: Wakanda Forever has been pinpointed as the ideal way to bring several plot strands together; the Atlantean is a staunch defender of the oceans, who obviously wouldn’t be pleased at Tiamut f*cking up his turf, which also helps tie the Eternals and their narrative back to the overarching MCU mythos.

There was a brief reference to it becoming a tourist destination in Moon Knight, but it’s only a matter of time before the unexpected landmark factors back into continuity in a more substantial fashion.