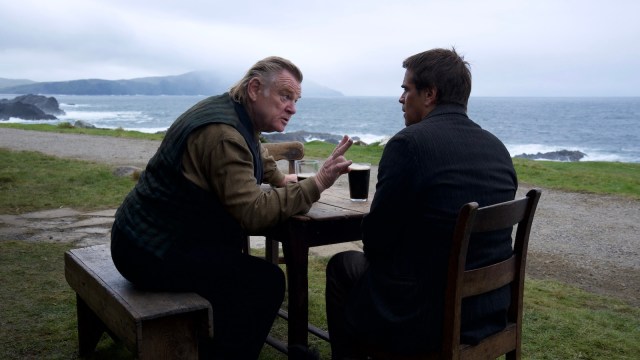 Jonathan Hession/ Courtesy of Searchlight Pictures.
Review of: The Banshees of Inisherin

In Martin McDonagh's morbidly hilarious meditation on male friendship, Colin Farrell and Brendan Gleeson turn in performances every bit as powerful as in 'In Bruges' and paint a heartbreaking but comic look at one happens when one man doesn't want to be friends with another anymore.

“I just don’t like you no more,” Brendan Gleeson’s Colm intones to Colin Farrell’s Pádraic in the inciting scene of The Banshees of Inisherin. It’s a line that would be a throwaway or a thin punchline in most other comedies but Martin McDonagh makes it the heart of this melancholic, heartbreaking, and ofttimes hilarious film. The impasse between two men, one who wants to be left alone and the other who can’t let go, is as gripping and meaningful as any tale of star-crossed lovers and it may be McDonagh’s magnum opus.

The film takes place in 1923, in the waning days of the Irish Civil War, but little more than the sound of gunfire touches the remote isle of Inisherin, a fictional part of the Aran islands off Ireland’s West coast. But conflict finally touches its shores when Colm doesn’t meet Pádraic for their standing pint at the island’s public house. After Colm evades Pádraic’s overtures he’s finally confronted by the man who forces him to admit that their friendship is over. Without seeming malice, without any prior argument, Colm is through with Pádraic.

Unfortunately for Colm, you can’t exactly ghost someone on an island so small that the inhabitants know everyone’s names and the names of everyone’s pets and livestock as well. And certainly not when there’s only one pub to go to. Pádraic, who hasn’t the slightest wish to let Colm’s friendship go, consistently finds himself drawn into the other man’s orbit even on the occasion he’s not actively imploring him to take up things where they were left off. And while the situation breeds hilarity, it also lends to seemingly inevitable yet unlooked-for violence.

McDonagh’s at his best here, both morbidly hilarious while at the same time grounding every laugh with equal gravitas. As Pádraic, Farrell turns in a performance that is at first gormless and later electrified by the seeming hopelessness of maintaining the most meaningful relationship in his life. Gleeson, as a man desperately seeking something more meaningful than meandering drunken conversations at the local as he nears the end of his life is both instantly relatable and yet utterly ruthless as he takes grisly measures to deny Pádraic his friendship.

On either side of the incredible performances by the two In Bruges co-stars are the elevating performances of Kerry Condon as Pádraic’s sister Siobhán and Barry Keoghan as Dominic, the butt of the island’s jokes. Although Condon initially offers succor to her brother she comes to accept more and more that her home is stultifying her. Keoghan’s Dominic proves a foil to Pádraic and then a sop for his friendship with Colm, all the while just wanting someone, anyone to rescue him from the drunken abuse of his father, the island’s lone policeman.

There’s plenty of laughter to be had in The Banshees of Inisherin but it comes at the cost of blood and tears and results from the deep sadness of men unable to talk about their feelings. And perhaps that’s grandly Irish. McDonagh’s turned in masterful work before, In Bruges and the award-winning Three Billboards Outside Ebbing, Missouri but Banshees feels like his most fully realized and written work yet, a true blend of McDonagh’s acclaimed playwriting abilities and his skills as a filmmaker. It shouldn’t be any surprise if the film puts him on the path to awards season gold yet again.

The Banshees of Inisherin is scheduled for a limited theatrical release on Oct. 21.

The Banshees of Inisherin

In Martin McDonagh's morbidly hilarious meditation on male friendship, Colin Farrell and Brendan Gleeson turn in performances every bit as powerful as in 'In Bruges' and paint a heartbreaking but comic look at one happens when one man doesn't want to be friends with another anymore.