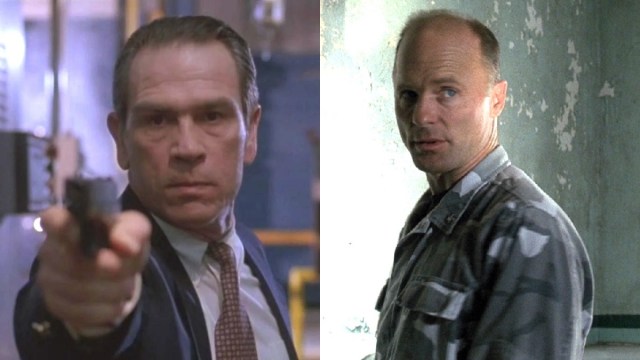 There’s a fine line between an antagonist and a villain, with plenty of all-time great movies luxuriating in the storytelling shades of gray that come from having the opposite of the hero simply being a person doing their job, as opposed to a scenery-chewing or mustache-twirling nemesis that’s definitely in the wrong.

While there’s absolutely no shame in keeping the differences between good and evil as black and white as it gets, film fans on Reddit have been revealing their choices for the best cinematic antagonists of all-time who can’t truly be considered as genuinely bad guys, and the candidates being put forth are illuminating.

The conversation gets kicked off by a pair of acclaimed Oscar-winning actors playing dogged feds trying to crack their latest case, with Tom Hanks’ Carl Hanratty from Catch Me If You Can and Tommy Lee Jones’ relentless U.S. Marshal Samuel Gerard from The Fugitive two excellent examples with which to ignite the discussion.

Ed Harris’ General Hummel has always been deemed as a sympathetic figure by fans of Michael Bay’s action classic The Rock, because the only reason he took Alcatraz hostage with chemical weapons was to shine a light on the injustices thrust upon the soldiers under his command by the government and country they dedicated their lives to serving.

Val Kilmer’s Iceman was very much an adversary for Tom Cruise’s Maverick in Top Gun, but he wasn’t really a villain, while Ghostbusters‘ Walter Peck (despite the man having no d*ck) is correct in outlining the dangers of having unqualified supernatural investigators taking charge of a citywide effort to prevent undead apparitions and entities from staging a hostile takeover.

We’re maybe not supposed to like them, but that doesn’t mean they don’t have a point.