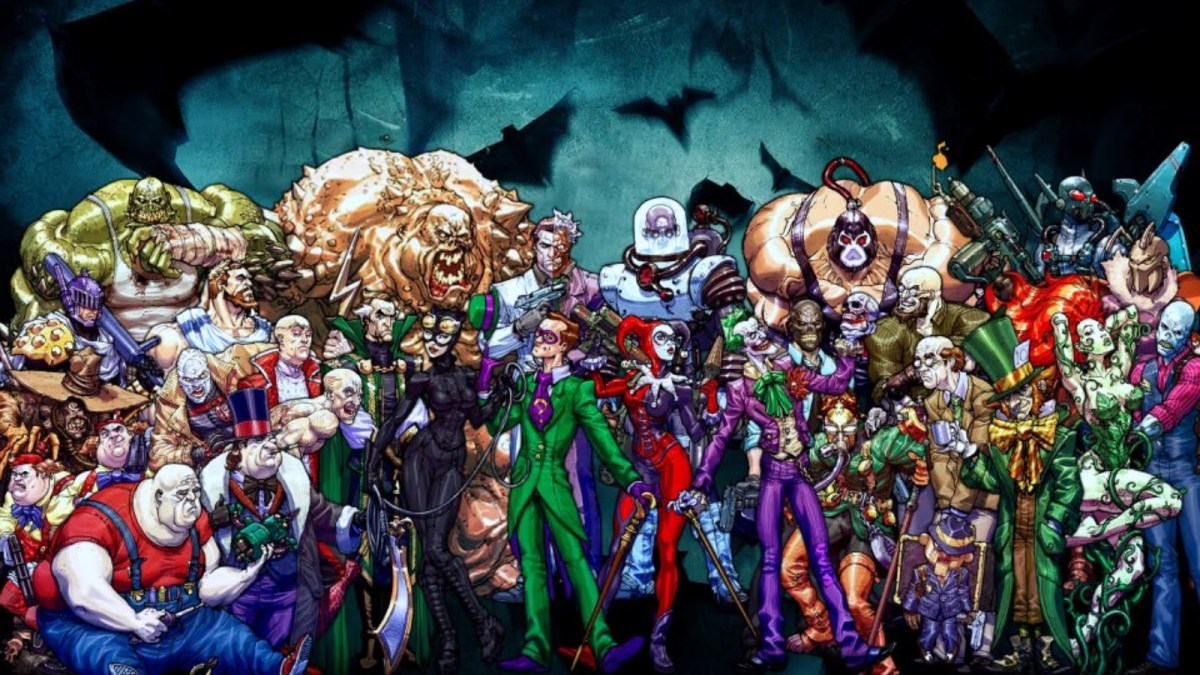 Matt Reeves’ The Batman brought us a whole host of supervillains straight from Batman’s Rogues Gallery. While the primary focus was Paul Dano’s The Riddler, Reeves introduced us to John Turturro’s Carmine Falcone, Zoë Kravitz’s Selina Kyle/Catwoman and Colin Farrell’s Penguin. We even got a cameo appearance from Barry Keoghan’s Joker when Robert Pattinson’s Batman visits The Riddler in Arkham Asylum. Still, there was much left to be desired in the way of Batman villains, particularly as Farrell’s screentime wasn’t even half that of Dano’s, nor did Keoghan get more than thirty seconds in the spotlight.

Although we’ve had Todd Phillips’ Joker starring Joaquin Phoenix and Cathy Yan’s Birds of Prey starring Margot Robbie, the inclusion of Joker and Harley Quinn within Reeves’ Batverse is entirely separate from the grander, overarching DCEU. Phillips’ film itself is in turn entirely separate from that. In fact, the sequel to Phillips’ Joker, titled Joker: Folie à Deux, will be introducing Lady Gaga as the Harley Quinn of Phillips own universe. Across other forms of Batman media, be it video games, TV shows or the like, several Batman villains have been transferred from page to screen, including the more obscure choices. What with The Batman 2 coming no earlier than 2025 (the horror!), there’s plenty of time for Matt Reeves to work in a few extra baddies — and here are our must-see picks.

Fox’s Gotham series — which began in 2014 and ended in 2019 — was one of the first instances where many of these characters gained a live-action counterpart. Seen as an overarching antagonist alongside Hugo Strange, the founder of leader of the Leagues of Shadows, Ra’s al Ghul, was played by Alexander Siddig. There have been other iterations of Ra’s in the Arrowverse and The Dark Knight trilogy, as well as several animated appearances in the DC Animated Universe, Batman: The Brave and the Bold, Young Justice and more. Unfortunately, there wasn’t any inclination in The Batman that Ra’s al Ghul would be entering Reeves’ Batverse any time soon, but his significance as a noteworthy dictator and his association with Talia al Ghul, with whom Batman has an on-again, off-again relationship, makes him an ideal candidate for a future appearance.

Technically, we’ve already seen Killer Croc in the DCEU in James Gunn’s hilarious box office flop, Suicide Squad. Apart from the saving graces of Viola Davis, Will Smith and Margot Robbie, there isn’t much to like about this 2016 disaster. In fact, Gunn must have been so ashamed by Suicide Squad that he signed on to make an ‘updated’ version of the story known as The Suicide Squad (2021). Alongside Margot Robbie’s Harley Quinn, Jared Leto’s Joker, Will Smith’s Deadshot, Cara Delevingne’s Enchantress, Joel Kinnaman’s Rick Flagg and Jai Courtney’s Captain Boomerang, the DCEU got its first look at Killer Croc in the form of Adewale Akinnuoye-Agbaje (try saying that three times fast). Killer Croc is basically DC Comics’ version of Dr. Kurt Connors (aka The Lizard) from Marvel, but he has a lot of potential to make Batman’s life just that much more difficult.

She’s a mean green mother from outer space — oh, wait, wrong character. Having featured in several DC Comics issues over the years, it’s no surprise that Batman’s ecoterrorist nemesis Poison Ivy was one of the first characters to make her live-action debut. Poison Ivy was portrayed by Uma Thurman in the 1997 film Batman & Robin, but she’s never had a live-action revival ever since. There’s been instances where Poison Ivy was featured on-screen, such as her animated counterpart and small appearances on Fox’s Gotham and the CW’s Batwoman series, but she’s never featured in a feature-length film since Thurman’s performance. She was supposed to have a starring role in a live-action Gotham City Sirens film alongside Catwoman and Harley Quinn, but that project got stuck in development hell and was eventually scrapped to make way for Birds of Prey. It’s about time we have some powerful female supervillains to give these men a run for their money.

There’s no topping Aaron Eckhart’s performance as Harvey Dent in The Dark Knight, but we can try. Two-Face features heavily in the video game Batman: Arkham City, much like Catwoman, who finds herself on the receiving end of Dent’s rage and conviction. Other than Eckhart, Harvey Dent’s live-action portrayals include Billy Dee Williams in Batman (as Harvey Dent only), Tommy Lee Jones in Batman Forever and Nicholas D’Agosto in Gotham. Dent’s legacy is mentioned in The Dark Knight Rises, but that is the last we hear of Two-Face’s character altogether in the live-action department. It goes without saying that Harvey Dent is long overdue for a makeover, especially since he’s been included on several lists for the greatest comic book villains of all time. Since Colin Farrell’s Penguin an Paul Dano’s Riddler were added to the mix, theres no reason as to why Harvey Dent — in some shape or form — can’t be included as well. It’s only a matter of time.

Here’s the big one. Batfans and DC Comics fanatics alike have been calling for Scarecrow to be the major antagonist of The Batman 2 ever since it was announced. As we know, the Batman: Arkham video game series released its most recent title, Batman: Arkham Knight, back in 2015. Along with the inclusion of other Rogues Gallery favorites, Scarecrow is the main mission villain who plans to release his fear toxins on the whole of Gotham City, thus causing a citywide evacuation. Scarecrow also targets Barbara Gordon, whom he knows has a deep connection and relation to The Dark Knight. Scarecrow also wishes to unmask Batman and reveal his true identity as Bruce Wayne once and for all, effectively crushing the hopes of the Gothamites who look to him as their savior. There have been a few appearances from Scarecrow over the years, such as Christopher Nolan’s 2005 classic Batman Begins, Gotham and Titans. He’s another major character who’s resurgence is long overdue.

Black Mask plays a pivotal role in Birds of Prey, portrayed by Ewan McGregor. In fact, Roman Sionis is the main threat throughout, targeting Harley Quinn and Cassandra Cain for stealing a diamond embedded with the account numbers to the fortune of the Bertinelli crime family. Victor Zsasz also plays an important role, so neither him nor Black Mask are desperately in need of an updated portrayal, especially since Ewan McGregor does such a good job, but it would never hurt for Reeves to sink his teeth into Sionis’ origins for himself. Besides, there’s nothing stopping McGregor from signing a deal with Reeves and transferring over to the Batverse instead of the DCEU. Who knows? Regardless, Black Mask is quite unlike any other Batman villain, therefore he deserves to be mentioned if not featured in The Batman sequel.

There has only been one live-action portrayal of the Mad Hatter to date, played by Benedict Samuel in Gotham. Other than that, Jervis Tetch hasn’t made waves in the Batman universe beyond a few cameo appearances and a pesky side mission in Batman: Arkham City. He’s certainly one of the more irrelevant characters, which is a shame because his story is so twisted and fascinating that it makes it hard not to be enthralled by him. There’s so many avenues to explore with Tetch, including his association with Lewis Carroll’s Mad Hatter, his obsession with finding Alice and his vendetta against Batman. There’s literally no method to Jervis’ madness, which is precisely the reason as to why he would make a great central villain, if not a significant side character. Plus, a lot of modern-age Batman fans aren’t as familiar with Jervis as, let’s say, Joker and Harley Quinn, so now is the perfect opportunity to delve deeper into the Batman lore for first-time fans who aren’t overly caught-up in the comic universe.

“A Death in the Family,” the four-part story published in Batman #426–429 in 1988 became about as universally popular as The Killing Joke. In fact, the death of Jason Todd is one of the most significant events in the entirety of Batman’s history as it gives birth to Red Hood, the alter-ego of the presumed-dead Jason Todd. The physical attributes of the Red Hood are also related to “The Man Behind the Red Hood!”, a story appearing in Detective Comics #168 which provides the earliest origin story for the Joker. As of yet, Red Hood has not made his live-action debut, but he’s the central focus of the Batman: Arkham Knight game, which explored the tragic death of the second Robin and his transformation into the Red Hood. Unfortunately, Red Hood is often overshadowed by other members of the Bat family, including Batgirl, Nightwing and whichever Robin happens to be relevant at the time. It seems like Red Hood might be a long way away, so we shouldn’t expect him in The Batman 2, but maybe there’s hope for The Batman 4 or 5?

Ironically, Firefly shouldn’t really be on this list. Leslie Grace’s solo Batgirl movie was scheduled for a 2022 release, but it was ultimately canceled by Warner Bros. Apparently, the corporation decided that taking a tax write-off made more financial sense than releasing it commercially, thus the final product never saw the light, much to the disappointment of many fans. Brendan Fraser has signed on to portray Garfield Lynns, aka Firefly, which would mark the character’s live-action debut. However, since Batgirl never come to fruition, the glory for bringing Firefly to the big screen is still up for grabs. In fact, if Fraser had any sense, he would be signing a contract with Matt Reeves as soon as possible and pursuing a much different future for the character. Actually, it was rumored that Firefly would appear in The Batman, but obviously, that didn’t happen. This bodes well for Lynns in future installments, especially the sequel.

Clayface is to Sandman what Killer Croc is to Kurt Connors. We’ve seen the success that the Sandman’s presence brought to Spider-Man, so it makes sense that Clayface could do the same thing for The Batman 2. Again, Clayface has never evolved beyond comic pages and animation, but as technology continues to evolve, the possibilities are endless for making Clayface’s CGI as believable and seamless as possible. Matt Hagen portrayed Clayface in the Batman Animated Universe, but there’s never been developments beyond that. Mike Flanagan (Doctor Sleep) told CinemaBlend that he pitched a Clayface film to Warner Bros but they turned him down, so that idea doesn’t seem to be going anywhere. Hopefully, Reeves can strike a deal to feature the character in his Batverse, which could open doors for Clayface to eventually — somewhere way down the line — get his own origin story brought to life.