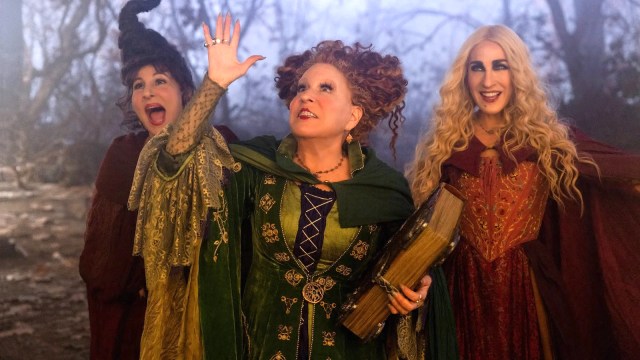 Hocus Pocus 2, the Disney Plus original sequel to the 1993 film Hocus Pocus, is slated to hit the streaming service on Sept. 30, just in time for Halloween. Hocus Pocus 2 is a long-requested follow-up to a movie that served as many ’90s kids’ first foray into horror, a tradition they will likely now share with their own children by cozying up to the couch to watch both films.

Now that the Sanderson sisters are once again in Hocus Pocus 2, it’s fair to ask: how many stars from the 1993 cult classic original will be returning for the long-awaited sequel?

Bette Midler, Sarah Jessica Parker, and Kathy Najimy will reprise their roles of the Sanderson sisters, three witches from the 17th century who are resurrected in modern day Salem, Massachusetts, upon which they inflict their brand of supernatural mischief. Doug Jones also returns as Bill Butcherson, aka the zombie that the Sanderson sisters bring back to life.

In terms of the trio of children in the original film who are tasked with reigning in the Sanderson sisters’ after they inadvertently resurrect them with a spell, none of those actors look to be returning for the sequel, according to Today. That includes Omri Katz’ Max Dennison, Vinessa Shaw’s Allison, and Thora Birch’s Dani Dennison.

Katz, however, gave a wishy-washy response at a recent ’90s Con interview that either refutes the possibility of a cameo or hints that one just might take place, after all, depending on how you interpret his words. In an interview with the Instagram account Hocus Pocus Collector, Katz said:

People obviously really disappointed that we’re not involved. […] But, I could be lying. We’re all in it! No, maybe we’re not. Maybe we are!

Jason Marsden, who did the voice-over work for the immortal cat known as Thackery Binx, is also not slated to return for Hocus Pocus 2. Katz, Shaw, Birch, and Marsden also do not appear under Hocus Pocus 2‘s IMDb cast list.

Hocus Pocus 2 comes to Disney Plus on Friday, Sept. 30.