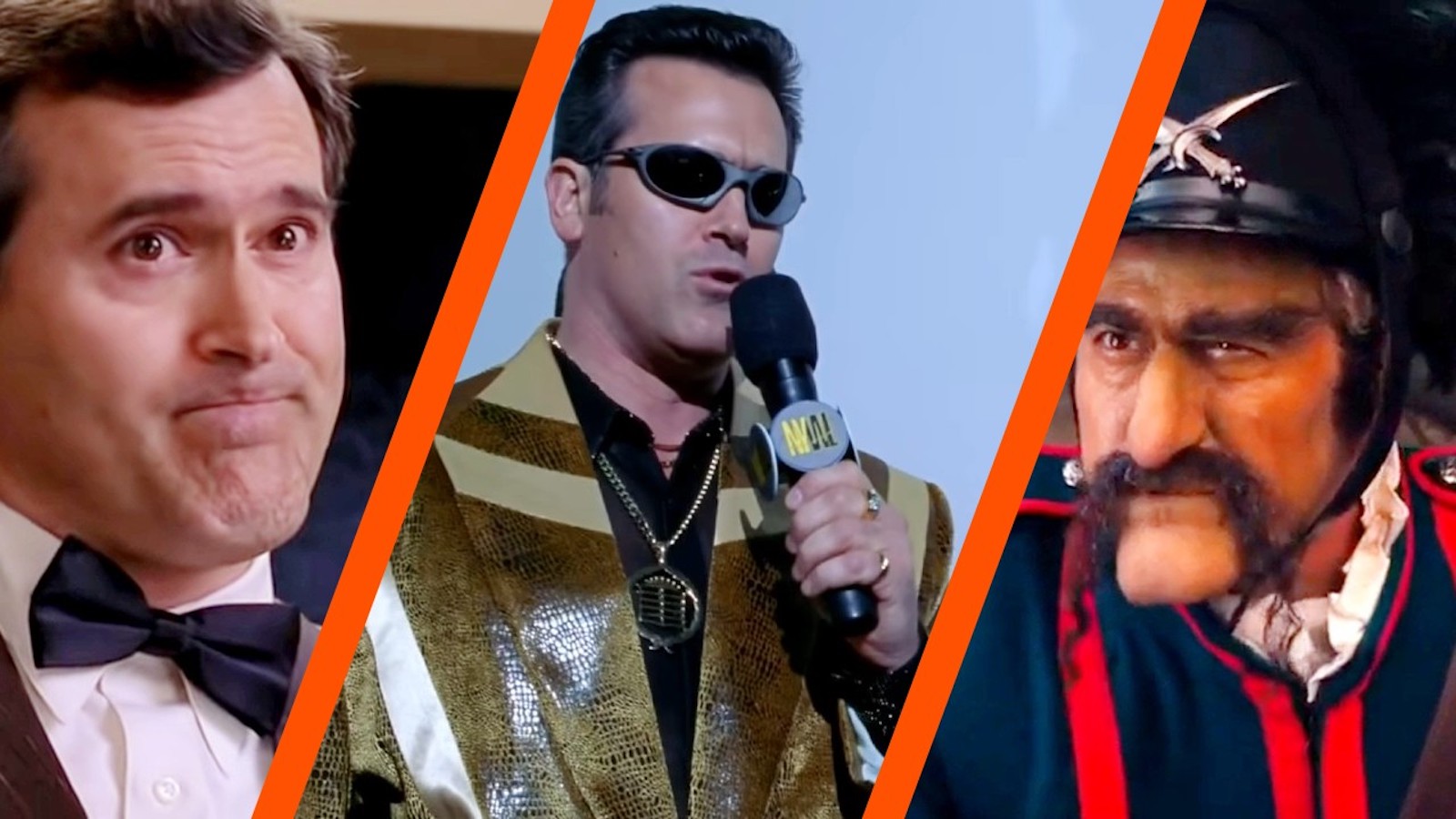 Warning: this article contains spoilers for Doctor Strange in the Multiverse of Madness.

Now that Doctor Strange in the Multiverse of Madness — helmed by the great Sam Raimi — is in theaters, it’s time to take a look at all of the times the director has featured his longtime collaborator and pal, Bruce Campbell, in a cameo role.

Multiverse of Madness has a surprising amount in common with Campbell’s first film as an actor, Raimi’s breakout hit, 1981’s The Evil Dead — including both films being about an evil book in the horror genre. Warning: spoilers to follow for Doctor Strange in the Multiverse of Madness.

Doctor Strange in the Multiverse of Madness — Pizza Poppa

First of all, let’s get this out of the way right off the bat: Campbell does make a cameo in Doctor Strange in the Multiverse of Madness. However, he does not play a variant of the titular Dr. Strange in some alternative universe, despite what a recent April Fool’s Day post he made on Twitter might lead you to believe. Instead, he plays the proprietor of a food stand called “Pizza Poppa!” When Xochitl Gomez’s America Chavez consumes the food purveyor’s pizza balls, in an alternative dimension, not realizing it is a world in which food is purchased with money, the proprietor threatens the multiverse-traversing hero. As a result, Benedict Cumberbatch’s Strange casts a spell on him to keep him continually punching himself for two weeks. Campbell also appears in the post-credits stinger, when the spell finally runs out, and turns to the camera to announce “it’s over!” By the way, that’s not the only instance of a character looking directly into the camera in the film, but it is perhaps the only instance that is used for humorous effect.

The most recent film that Riami directed, prior to Multiverse of Madness, was 2013’s Oz the Great and Powerful, which featured a cameo by Campbell as a guard in the Winkie army. James Franco plays the titular Oz in the film, the man who would eventually become the mysterious figure behind the curtain in The Wizard of Oz. As Slash Film points out, Campbell’s cameo is as a gatekeeper to the Emerald City and his charm surprisingly shines through, despite the brevity of the scene, even underneath layers of heavy prosthetic makeup and an over-the-top mustache. The fantasy-adventure film may have been a critical flop overall, and mostly anomalous in Raimi’s oeuvre, but the director brings a considerable amount of visual panache and wit nevertheless.

Bruce Campbell’s cameo in 2007’s Spider-Man 3 was a comedic high point in a film notorious for being chock-full of attempted humor that doesn’t always land (see: Bully Maquire dance). Despite its flaws, the film is arguably underrated and we were somewhat saddened to find out Campbell was once potentially poised to play the villain Mysterio in a planned fourth installment, according to The Hollywood Reporter. As a Maître d’ at a fancy restaurant, Campbell was assisting Tobey Maguire’s Peter Parker — whom he calls “pecker” in a cartoonish French accent — by planting an engagement ring in the champagne flute of Kirsten Stewart’s Mary Jane Watson. That proposal ended up going awry in the film, but we’re even more heartbroken that Spider-Man 4 had an unrequited fate.

There’s a strong case to be made that 2004’s Spider-Man 2 is the greatest superhero movie ever made, even by today’s standards. That reputation is not harmed one bit by Campbell being given a slightly longer — and sassier — cameo in the sequel than compared to the first film. The scene in question sees Campbell portray a snobbish usher who disallows Peter to enter the theater to watch M.J. after he is late to the show she stars in. Not only does the usher insist Peter tie his shoes and correct his tie upon arrival, but he also pretentiously explains he cannot let the freelance photojournalist and part-time superhero into the seating area after the show starts in order to “maintain the illusion” of the play. They have a back and forth that culminates in Campbell memorably shushing Peter and making a gesture to zip his lips.

Bruce Campbell’s ring announcer character in the first Spider-Man film from 2002 has the unique distinction of actually giving the character his iconic name. Peter had previously gone with the delightfully pathetic “The Human Spider,” but upon hearing this, the announcer harangues Peter and instead announces his presence to the crowd as “The Amazing Spider-Man.” Campbell would later lend his voice work talents to narrating the video game spinoffs of Raimi’s web-slinger trilogy of films, as well. As we alluded to before, there was a long-standing rumor that all three of the aforementioned Spider-Man cameos were actually Quentin Beck, AKA Mysterio, stalking Peter in disguise, all along.

Prior to Raimi directing anything in the Marvel Cinematic Universe or helming the excellent Spider-Man trilogy of the 2000s that helped popularize the superhero genre in mainstream movies, the director made a dark and subversive take on a comic book-inspired tale with the 1990 film Darkman. The film was originally envisioned as starring Campbell in the lead role, but the studio eventually chose Liam Neeson for the part. However, Campbell was able to make a cameo at the end of the film by playing the shapeshifting vigilante as one of his “Shemp” doubles, a long-utilized term Raimi has used in his movies in reference to The Three Stooges character and referring to stand-ins.

Campbell would later star in Raimi’s 1992 effort, Army of Darkness, as well as having a recurring role as Autolycus in the Raimi-produced TV shows, Xena: The Warrior Princess and Hercules: The Legendary Journeys. And of course, Campbell also starred in the seminal Evil Dead 2 in 1987, which is a film whose frenetic energy both behind the camera and in front of it — by Campbell’s slapstick performance — largely holds up to this day.

Catch Campbell and Raimi’s latest team-up in Doctor Strange in the Multiverse of Madness, in theaters now.