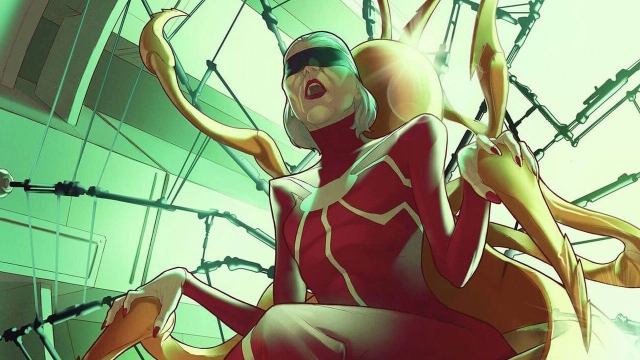 Sony is currently in the process of filming their next big addition to the Sony Universe of Marvel Characters, Madame Web, and it includes an early 2000s twist.

First set photos from the movie have surfaced online depicting New York City in the early 2000s. The set includes a billboard of Beyoncé’s debut album and a Chase banking building alongside some signature yellow taxis.

The images come from a report by Boston.com as the film is currently filming in the city. The report claims that Madame Web will continue filming in the area through to September.

Earlier this week it was revealed by Madame Web star Sydney Sweeney that filming had begun. The actress played coy with specifics but shared the joy in the training and prep work to appear in the Marvel universe.

Right now not a whole lot is known about Madame Web’s plot. The Spider-Man spin-off will bring many new characters into Sony’s Universe of Marvel Characters, but the details of which characters will show up isn’t yet clear.

The latest update regarding the film’s characters came last month when it was revealed that Emma Roberts had joined the cast of the film, though her role is still unknown at this time.

With filming underway, we should get more insight into these things over the next few months, but fans have less than a year to away before getting their chance to see the finished product.

Without any delays, Madame Web is set to arrive in theaters on July 7, 2023.