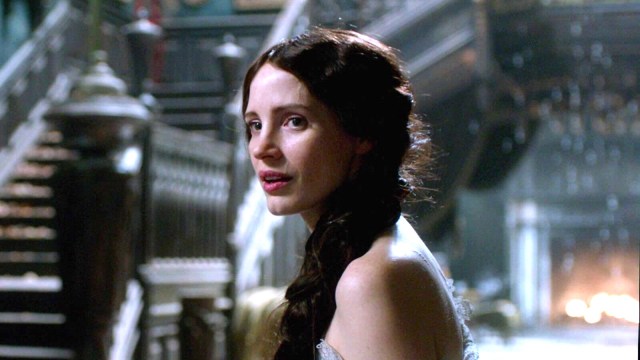 Ahead of Guillermo del Toro’s very own horror anthology series, Cabinet of Curiosities, dropping on Netflix later this October, fans of the Oscar-winning director are reappraising one of the more underrated entries in his filmography. While the likes of Pan’s Labyrinth and The Shape of Water went down as instant classics, some other of del Toro’s films failed to enjoy the same kind of acclaim. Like his 2015 gothic ghost story, Crimson Peak.

For those unfamiliar with it, Crimson Peak stars Mia Wasikowska as aspiring novelist Edith Cushing who marries brooding nobleman Sir Thomas Sharpe (Tom Hiddleston). She moves into his crumbling, country home only to uncover the (literal) ghosts of her husband’s past. Jessica Chastain co-stars as Thomas’ creepy sister, Lucille.

A glance at the movie’s IMDb page, with its middling 6.5 rating, might give you the impression that Crimson Peak is nothing to write home about, but actually there are a lot of folks out there that absolutely adore the film. Many of them have been singing its praises on Reddit after one viewer hyped it up as a one-of-a-kind movie.

Unfortunately, Crimson Peak suffered at the time of its release due to a poor box office haul (at least it earned back more than its budget, unlike last year’s Nightmare Alley). As one canny commenter pointed out, the problem likely lied in the fact it was promoted as a “straightforward horror” when it’s really anything but.

Del Toro himself likes the term “gothic romance,” so let’s go with that.

If someone’s looking for wall-to-wall scares, don’t show them this one…

…but if you know a horror newbie, then you should definitely recommend it.

As for what other pieces of media measure up to Crimson Peak‘s gloriously gothic blend of elements, any of these are good starting-points:

Crimson Peak can currently be streamed on Netflix in the U.S.